Boris and Natasha looking for petrol

Saturday, the 25th of January, David and I drove south to Arches National Park near Moab Utah. We then hiked to Clover Canyon to verify the existence of a natural arch there (and to enjoy some sun). Nearby is Broken Arch and Sand Dune Arch. 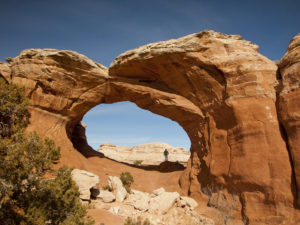 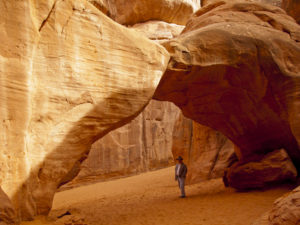 Along the way we stopped and visited Magic Mystery Bridge, a large Class B natural arch/bridge hidden in a drainage east of Sand Dune Arch. 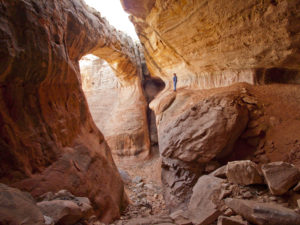 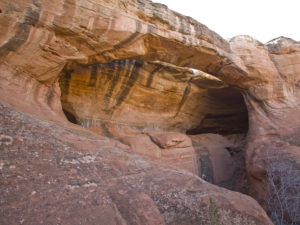 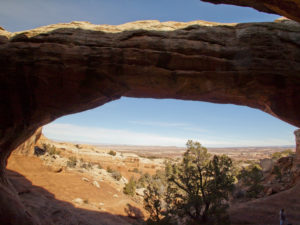 I had hiked to this Clover Canyon years before but did not find an arch. This time we suspected that we would need to drop into the bottom of the canyon to see the arch.

There is only one place that allows you to descend the cliffs to the bottom and the passage is marked by Indian petroglyphs that can be seen from the top cliff edge. The method of decent requires some tracking north along the cliff until we can jump to the top of a sidewalk which drops a short distance. Instead of descending this rock fin into a deep crack, we climb up, over and then down some rough rocks sticking on the side of the cliff wall, pass behind and then through some brush and gain access to the top of a second fin that is separated from the original cliff edge. From here we jump a deep crevice to the top of a third fin and carefully walk to the far end of the fin to discover a way to climb down the broken rock to the petroglyphs and then gain access to the canyon floor. Yikes! 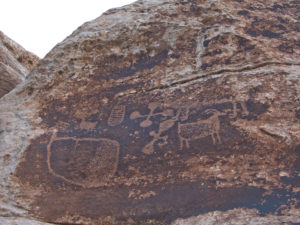 From the bottom of the canyon we walked a short distance northward to find Clover Canyon Arch about half way up the cliff and nearly unnoticeable from the top. The natural arch is almost big enough to qualify as a Class B arch except that the gap between the arch and the cliff wall is only a couple of inches. Not really much of an arch. 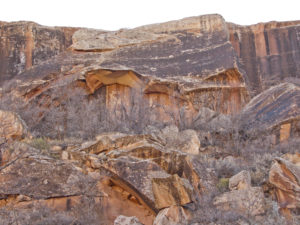 After a good hike and a bit of climbing around in the rocks, we were ready to head home. 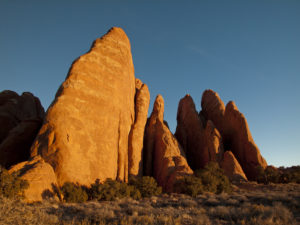 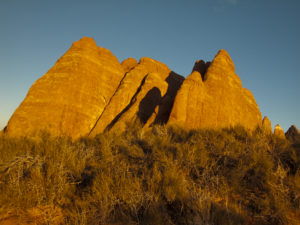 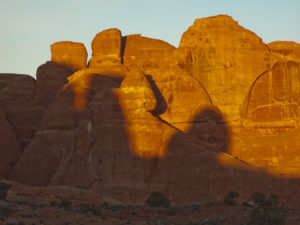 When we got to Green River that evening, we were stopped by a Russian couple (now living in Los Angeles) who ask us for a ride. They had run out of gas on I-70 about 20 miles west of Green River. It is out of our way but we have plenty of time so we give them a ride back to their vehicle with a can of gas. They couldn’t understand why they were able to drive a hundred miles from Salina without seeing a single town or gas pump.

Welcome to the San Rafael Swell area of Utah!