Elephant Arch in the Finger Canyons of Zions National Park

Saturday morning, David and I again jumped in my Ford Explorer and headed south. This time we headed for the Finger Canyons of Zions National Park, south of Cedar City Utah.

We were going to try to hike to Elephant Arch which required that we drive the Zion’s park road to Lee Pass and park just after crossing the pass. We then hiked down the Hop Valley trail for a mile and then head northeast up the first side “finger” canyon after Lee Pass.

It was a nice day but we were out of shape from the long winter. The first mile was all downhill on a good trail but as soon as we left the trail and headed up the drainage, there was no trail. In fact, the going is quite rugged. We were diverted for a while by another minor arch we called Beatty Point Arch. 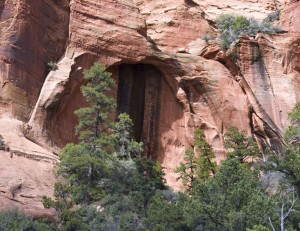 The day was mostly sunny which really felt good. However by afternoon, low clouds were scrapping over the peaks and the temperature dropped significantly. 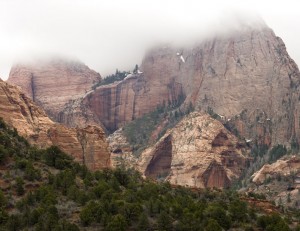 We ended up climbing around the cliffs looking for Elephant Arch until we were out of strength and decided to turn back.

The worst part of the hike was the last mile… all UP HILL!

We did manage to spend some time taking pictures of the cliffs from the park road as the sun peaked under the clouds. With good binoculars, from the end of the park road, you could see Elephant Arch. We just needed to go up the drainage a bit further to reach it!

Oh well. It was good to get out again. We are looking forward to a long summer of exploring southern Utah again.