Saturday morning, my son Cory, my brother David and myself, all loaded into my Ford Explorer and drove down to Arches National Park near Moab Utah.

We wanted to explore the northwest corner of Arches National Park called Eagle Park, looking for a couple of arches that we had not yet found. This required four-wheeling nearly to the park boundary and then hiking for a couple of miles to the sandstone fins where the arches were suppose to be hiding.

After climbing around the south end of the sandstone fins, I was finally able to locate one of the arches called Sibling Arch. We couldn’t climb up to it but I was able to climb high enough to hold my camera over my head and get an “OK” picture of the arch. 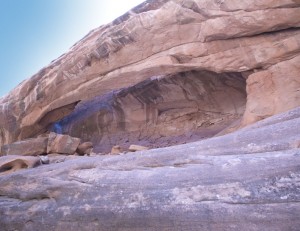 We then swung around the north end of the sandstone fins to see if we could find the other arch. By this time, we decided that it was actually getting “hot”, a sensation that we hadn’t felt for quite a while. We also found that “hot” had a tendency to sap your energy. We were getting tired fast.

After checking every nook and cranny in the area where the arch should have been, we finally had to give up and head back.

On the way back we choose a route that would take us along the north slope of the hills in hopes of stumbling across something new. This caused us some problems as we ended up at the top of a rim of cliffs we couldn’t descend. By the time we worked out a safe way down, we found ourselves on a large deposit of gypsum crystals. The vein of crystals stretched clear down the ridge before disappearing into the ground again. 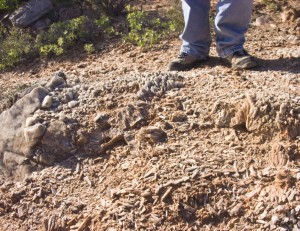 On the way back across the cedar hills, we did find an interesting class “D” natural arch. Oh well… it was something, at least. 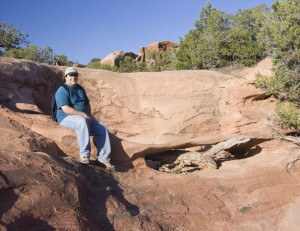 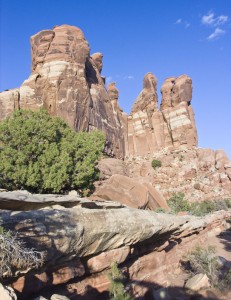 Four hours and several drinks of Mountain Dew later, we were home again.