I had been doing some “arch hunting” using Google Earth on my computer. There were some areas that I wanted to explore east of Goblin Valley State Park southwest of Green River Utah. Here there were some small canyons where I had found several natural arches years earlier and I had noticed some possible natural arch structures nearby when looking at Google Earth. So on Saturday, David and I jumped in my Ford Explorer Sport and headed south to see for ourselves.

By the time we arrived on the Sweetwater Reef, the temperature was hotter than we had hoped for. It was too hot for hiking very far — but that didn’t stop us from doing it anyway. Needless to say, we ended up sitting quite a while in the shade of cliffs trying to recover from near heat exhaustion. 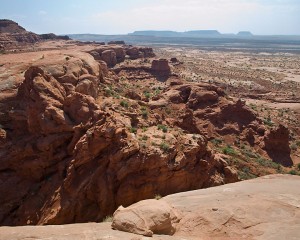 We did make it to the structures that I had noticed on Google Earth. They turned out to be unusual deep natural tanks. No natural arches. Still we got to see some new country and do a little hiking. That is never a waste of time for me.

On the way back, we stopped at Little Flat Top mesa to take some pictures of the goblin type rocks as the sun was setting. 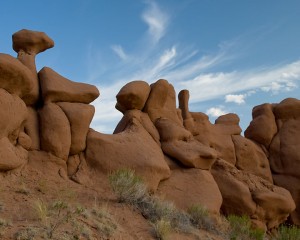 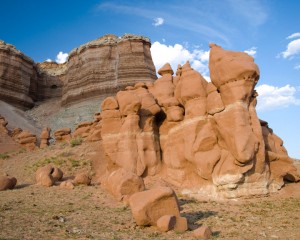