Friday evening after work, David and I drove down to Panquitch Utah and spent the night at a funky little motel where we almost froze to death overnight. We decided that the next time we were going to verify that the heater worked before taking a room.

The next day, we drove south to Kanab Utah, east to the Cottonwood Canyon road to Cannonville and then northeast along a jeep trial to Wahweep Wash. We then hiked south for just over a mile to visit the Wahweap Hoodoos (or rock “toadstool”) formations. This is REALLY interesting country and formations but also REALLY hard to photograph properly. (White mudstone in full sun.) 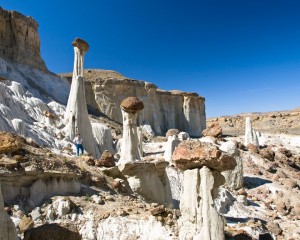 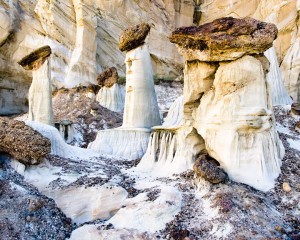 Since that didn’t take the whole day, we had plenty of time for exploring the area’s jeep trails. We stumbled across an old cattle herder “line shack” hidden back in a cliff pocket. I hope the “Protect Utah” Environmentalist types don’t find it or the cabin will end up burned to the ground… like many other old cabins and shacks that used to be scattered around the back country of Utah. 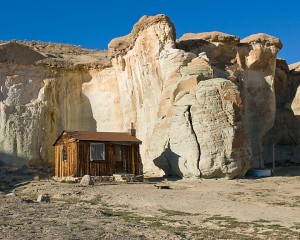 We stayed at a motel in Kanab Utah that night so we could get a in good day of hiking the next day. The next morning we drove out to an area near the Arizona border, north and east of Buckskin Gulch, Coyote Buttes and “The Wave”. After four-wheeling up a challenging jeep trail to the top of a plateau, we found good roads that came in from the north. (Drats!). We then drove out to the south side of the plateau so we could hike off “The Dive” and along the north side of Buckskin Gulch to remote Cobra Arch. 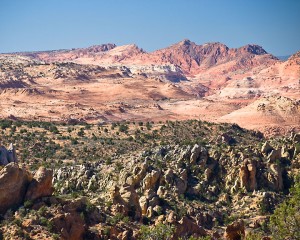 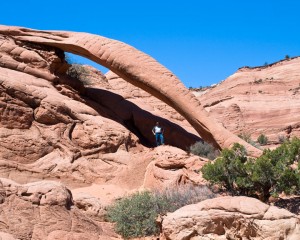 The hike was about three miles to Cobra Arch but most of the trail was up and down sand hills. It was exhausting! (I had been here several years before and it was just as bad then too.) On the way back, we climbed up the east wall of a bowl so we could walk on the flat, hard rim on the way back. That made it somewhat better but we were still wasted by the time we found our way back to the Explorer. 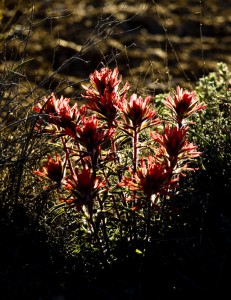 We then drove into Page Arizona to find a motel room for the night and try to recover from the day’s activities.

The next day we drove back to Big Water Utah and then northwest along the north side of Lake Powell to Crosby Canyon. 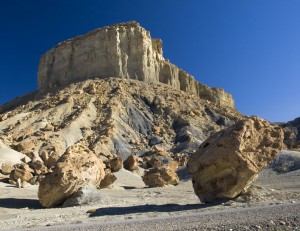 Here there was a dirt road that allowed us to drive east down Crosby Canyon and find Crosby Canyon Arch hanging above us on the north cliff. 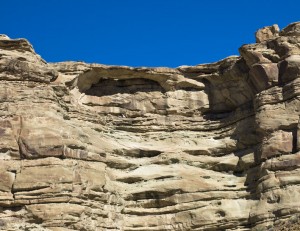 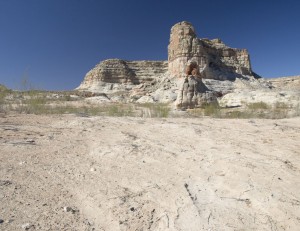 After taking some pictures, we continued driving all the way to Lake Powell… or at least where Lake Powell used to be before several years of drought and the lake level dropped over a hundred feet. We could of probably continued driving down the former lake bed to the lake some distance away, if we had wanted to. After exploring the area a little, we headed back to Big Water Utah (formerly Glen Canyon City, Utah.)

We also wanted to hike to an arch we heard about, in Buck Tank Wash, called Birthday Arch. It was on the south side of the highway not far from Big Water Utah. We took a dirt road to an area that looked like it was fairly close to the wash. As it turned out, we should have parked next to the highway and just walked up the wash to the arch. Instead, we ended up traversing multiple sand hills and difficult rough country. We did get close enough to take pictures of Birthday Arch across the wash before plodding back to the Explorer again. (Hiking in sand, it was getting hot and David’s glasses were falling apart… suddenly we weren’t having a good time.) 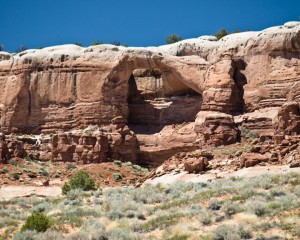 We still had plenty of daylight but very little strength so we stopped at West Cove before crossing The Cockcomb to take pictures of two arches located there called Condor Arch and West Cove Arch. 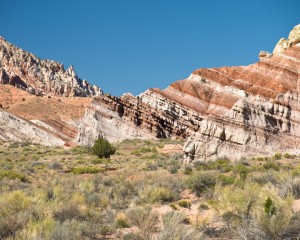 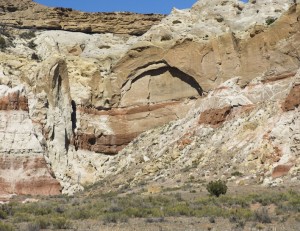 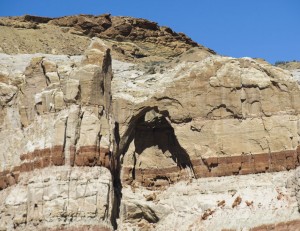 We also drove up Johnson Canyon and took pictures of Eagle Arch. We stopped at the old movie set where western shows like Gunsmoke were filmed. The movie site is no longer open for visitors so we just took a few pictures from the road. 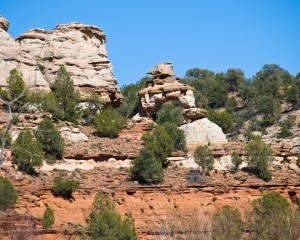 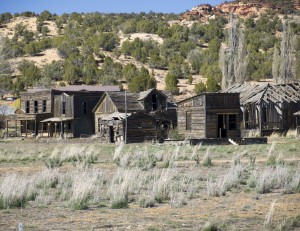 We were then tired enough to just head for home.