Above Buckhorn Draw and Calf Canyon

The weather in Utah has turned warm again. Maybe this is the Indian Summer that we thought had missed us this year. With yet one more nice weekend in the forecast, David and I again headed south on Saturday with the ATVs in tow. This time we headed to the north end of the San Rafael Swell, east of Castledale Utah.

The first trail took us to the Morrison Knudsen Tunnels (or MK Tunnels). This area was used as a test conducted for the Department of Defense between 1948 and 1952. They drilled a tunnel and then set off large explosives nearby to measure the damage nearby. We didn’t look for the tunnel but there were two large explosion craters plus a cave in crater in the short canyon. It also looked like they had recently brought in earth moving equipment to rework the area, perhaps even burying the tunnels for safety purposes. 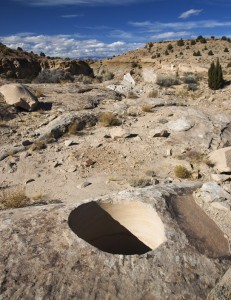 The next side canyon was to the southeast. We ended up driving down both sides so we could locate a class C natural arch. When we drove down the northwest side, we noticed two smaller class D arches, one of which was in the base of one of the sandstone towers called “The Conquistadors”. 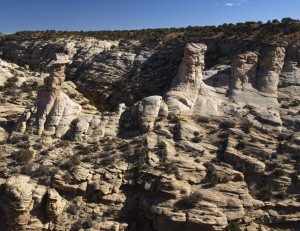 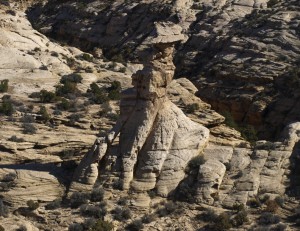 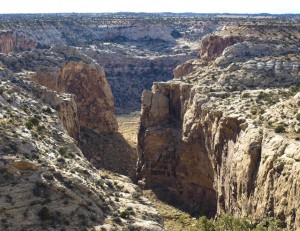 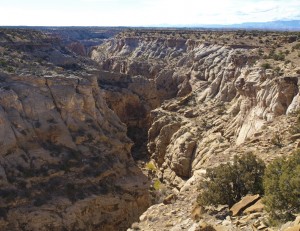 We had to drive down the southeast side of the canyon, almost to the mouth into Buckhorn Draw, until we were able to locate the class C double arch that I had been calling Cave Arches. It was located on the opposite cliff wall but the best view was from the southeast canyon rim. Here we found quite a number of rifle shell casings. (By enlarging the photographs that I took that day, I could see that they were shooting the rock that created the natural arch across the canyon. Luckily, other than many impact holes, it really didn’t do much damage to the arch structure.) 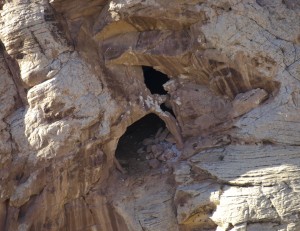 The ATV trail that we had been following, seemed to be a designated trail defined by occasional red wooden arrows. We continued to follow the trail which wound along the canyon rims and allowed wonderful views into Buckhorn Wash and a number of smaller side canyons. 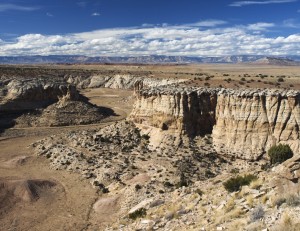 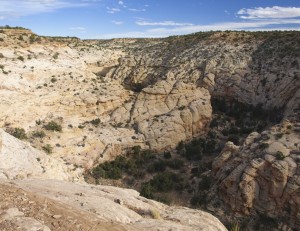 By late afternoon, the clouds had started to bunch up to the point of making photography difficult. There was no real chance of rain — just clouds. 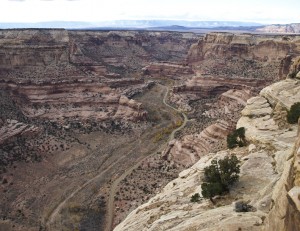 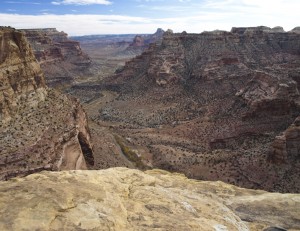 By this time we had hit the edge of Calf Creek, which is a major side canyon which extends for miles to the northeast. With binoculars we could see an ATV trail running along the bottom of Calf Canyon that we didn’t know about. We made note of this trail for a future ATV trip. 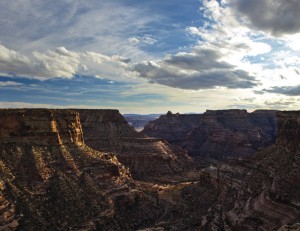 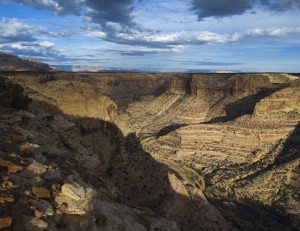 We also found a nice class B natural arch that we did not know about. 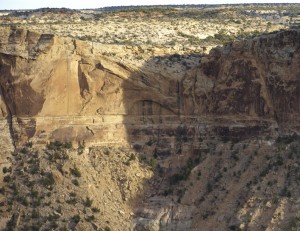 We followed the north rim of Calf Canyon since that was going to get us back to the county road again anyway. When we were finally able to drive around the head of Calf Canyon, the day was drawing to a close. 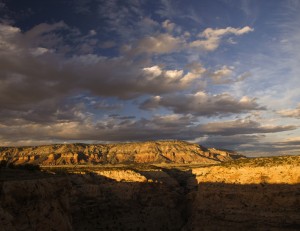 We stopped here to look for some Indian pictographs that I knew were nearby. I ended up climbing down into the canyon and hiking down canyon for several hundred yards before I found them on a cliff wall near two small alcoves. I quickly took several pictures in practically dark conditions before heading back to the ATVs. 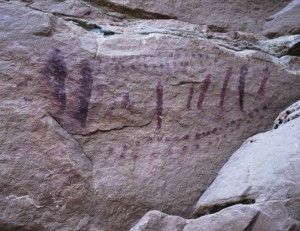 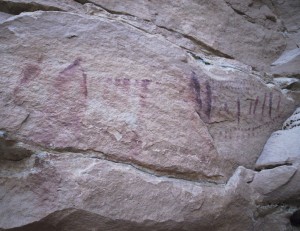 Back on the ATV’s, we located a nearby dirt road that took us back to the country gravel road. It was then a dusty 8.2 miles ride back to the Explorer, in the dark. The road must have been somewhat downhill because I noticed that at several points, I was traveling at 37 mph. That is probably the fastest I have been able to get my ATVs to move… probably faster than is safe.

It was an easy drive back to Utah County that evening. It helps that the days are so short now that it is dark by 6 PM. Short days sure cut into day trips to southern Utah though.