After a long week of work, snow storms, cold and wind, I was surprised to find that Saturday was set to be warm, dry and sunny. There was only one thing to do — head south for a day riding ATVs and exploring some area of southern Utah!

Because my wife and I had taken David out for dinner for his birthday the night before, we didn’t get a real early start Saturday morning. David and I drove down to the Behind-the-Rocks area south of Moab and unloaded the ATVs. We had been here two months earlier but it was much warmer then. We were wearing coats and hats for the 45 degree high temperature. However, there wasn’t a cloud in the sky so it still felt nice in the sun.

We drove west until we could intersect a trail heading north where we attempted to drive down the Behind-the-Rocks trail from the other end. The last time we were on this trail, we turned around when it got too rough. We thought by coming in from the other end, we could bypass a lot of the problem areas. We were wrong. 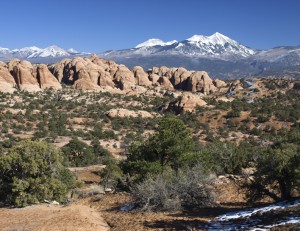 The trail was just as rough from the west end. At a steep and rocky ravine, we encountered two Jeep Cherokees trying to navigate the crossing. It was ugly. We managed to get around them and barely negotiated the trail ourselves. They were still trying to figure out how to get up the north side when we gave up watching them and headed down the trail again. 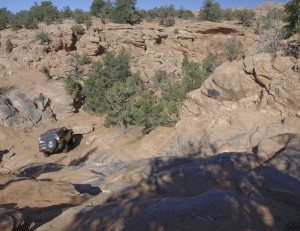 We ended up parking in exactly the same place we did on our last trip when we went looking for Back of Beyond Arch. We tried the hike again but took another fork in the canyon this time. As it turned out, this fork was the main canyon which we should have taken last time (two months ago). After some hiking we found ourselves at the bottom of a small dry fall that looked very familiar. After building a quick ladder out of a dead cedar tree trunk, we were able to climb up to the next level where we finally located Back of Beyond Arch… again. (We were there 10+ years or so ago.) 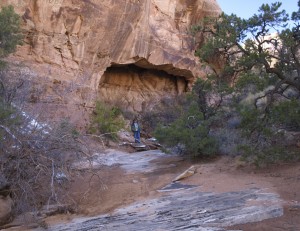 Back on the ATVs again, we continued eastward on the trail since we figured going forward was now the easiest trail. There was still one area where I almost lost it while climbing a steep rock. David had the same problem on another rock.

Back on the main dirt road, not far from where we had parked the Explorer and ATV trailer, we again headed west directly into a lowering sun. This time we drove almost all the way to Hunter Canyon. 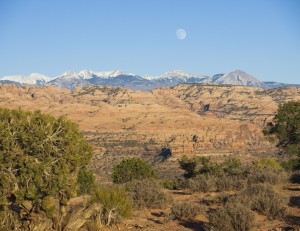 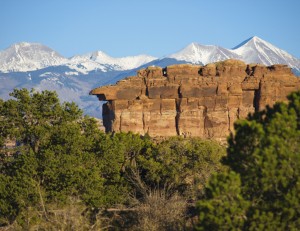 The sun was now setting and we didn’t have much time to locate a 30 foot natural arch that we knew was in the area. We quickly hiked to the edge of a series of canyons and tried up and down the canyon before we decided that we weren’t going to easily find it. I even hiked to the head of the canyon to investigate some deep alcoves just in case one of them was actually the arch. (Later we found that the arch was actually located in the side canyon further to the west. We will get it next time!) 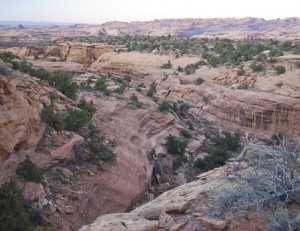 By the time David and I met back at the ATVs, the sun had set and it immediately started to get cold. We bundled up in coats, hats and gloves before starting the long ride back to the Explorer in the dark. I had purchased a set of clear goggles so I didn’t freeze my eyeballs at 30 miles per hour. Still, we were quite chilled by the time we rode back to the Explorer, loaded up the ATVs and crawled back in the vehicle almost an hour later.