Behind the White Wash Sand Dunes

Friday I had to do some last minute scrambling to get the flat tire fixed on one of the ATV’s. I tried to get it patched but it was declared un-savable. I then had to make a quick trip to our favorite ATV store in Payson Utah (Rocky Mountain ATV), to purchase a new rear tire, to replace the tire (also new) that got popped during our last ATV trip.

Saturday morning found David and I heading south with the ATV’s. We drove down to Green River Utah where we gassed up and stocked up with a little food. We then headed east down I-70 freeway to the next freeway exit, and then headed south to the White Wash sand dunes.

In July, when we last visited the sand dunes, we were practically the only visitors and all previous vehicle tracks had disappeared because of wind or storm. Saturday, there were RV’s and campers everywhere, with their various sand vehicles. However, the area is large enough that we only ran into a couple of ATVs in our immediate area, only once or twice.

The day was partially cloudy but warm. We could see potential storm clouds in the distance but they didn’t seem to be moving too fast. The cottonwood trees that stuck out of the sand dunes, were turning golden with the fall weather. It was wonderful!

We spent some time just spinning around in the sand dunes, trying our new tires in the deep sand. We found that having some tread on the tires significantly increases traction. (Duh!) 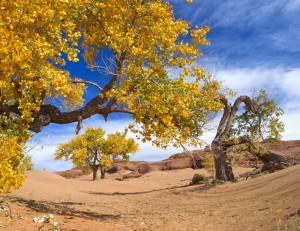 The canyons that we wanted to explore were actually east of the sand dunes so we rode back down to the wash and headed east and the south around the dunes. Every side canyon that we encountered, we either rode up the existing jeep trail or stopped and hiked up as far as we could. All of the side canyons ended at dry falls where we then turned around. After about six of these side canyon hikes, I was starting to get tired. You can only scramble over rock fields and climb through brush for so long before the legs and back start to complain.

However, the area was fantastic! While the sandstone wasn’t exactly the right type for the formation of natural arches, we had found arches in this kind of sandstone before so the possibility was always there. 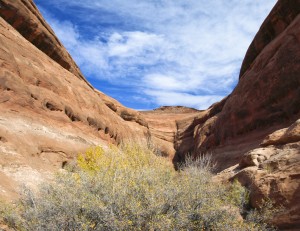 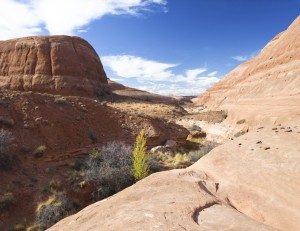 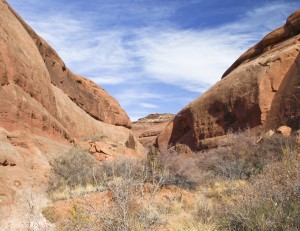 We had pretty much explored the main side canyons all the way up the main canyon until even the main canyon became narrow somewhere southeast of the sand dunes. We then hit a part of the trail where it jumps up to a higher level via a steep sandstone ramp. Inasmuch as I have rather strong feelings about attempting steep climbs in remote locations (ever since I rolled an ATV in Oak Creek), I voted against attempting it. We walked up the trail for a way and it really didn’t look like the trail could continue much further anyway.

We turned around and headed back down the canyon, exploring a couple of small canyons on the way back. By the time we got back to the sand dunes, we could see rain clouds heading our way. However, it was still early and the first back of clouds didn’t look like the rain was actually hitting the ground… yet. We decided to drive around to the southwest side of the dunes to explore that area.

Southwest of the dunes is mostly slickrock sandstone which can be slow riding on ATVs. We soon hit a deep ravine that ran all the way to the south cliffs and kept us from continuing to the southwest. Instead we headed east again to check out a narrow canyon. We stopped the ATVs at the mouth of the slot canyon but noticed that dirt bike motorcycles had driving in. We walked up the canyon and found that it soon opened up into another sand playground, which apparently is only available to dirt bikes. Interesting. 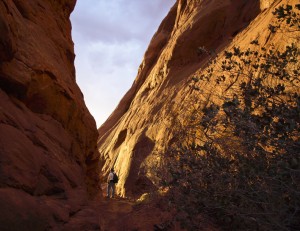 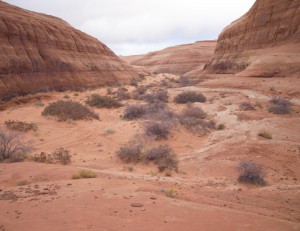 By this time, the clouds were looking much more threatening so we began to pick our way back to the comfort of the deep sand. 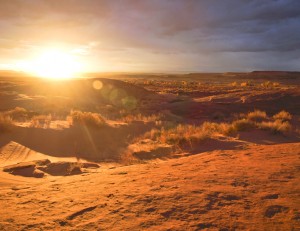 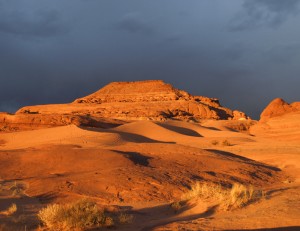 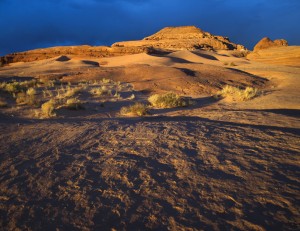 We then hurried down the White Wash and were soon confronted by a line of dirt bikes heading the opposite direction at full speed. There was some quick maneuvering to avoid collisions, which is always interesting when flying down the wash at 30 mph.

By the time we climbed the hill back to our parking place, there were a few drops falling and the drive back to the freeway was in the dark because of the dark clouds. Still we only used the windshield wipers a couple of times on the drive home.

Green River Utah was only one freeway exit away but we were groggy from a long day on the bikes. We were going to need caffeinated drinks and a hamburger to get us home that night. However, as I pulled off on the second Green River freeway exit, I encountered the lights of an eighteen wheeler heading right for us!

THAT will wake you up quick!

After a quick evaluation of the situation, I decided that it was the big rig that was in error so I began to flash my lights at him. As we pulled up next to him, I yelled out that window to let him know that he was going the wrong way. He yelled back an acknowledgment and I noticed that he had an eastern European accent. We continued into Green River and noticed that he was backing slowly back down the freeway ramp.

We made it home in fairly good time that night, though the last hour was a real struggle to stay awake.

It was another excellent day! (Even if we didn’t find any natural arches.)