Looking through maps, I noticed that we had not yet explored the Copper Globe area of the San Rafael Swell. That looked like an excellent ATV trip so Saturday morning, David and I headed there.

Just before hitting the San Rafael Swell, we stopped at a Rest Stop where years earlier, we had located a small class D natural arch now called Rest Stop Arch.This was near the head of Muligan Wash. 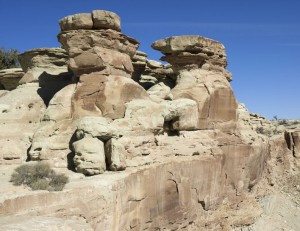 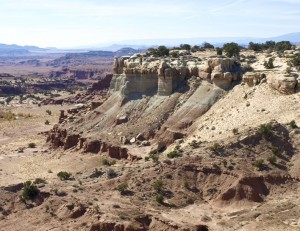 A little further down the road, we parked just south of the I-70 freeway in an ATV unload area. We then headed east and then south down the Golden Globe and Link Flats road. The road crosses Devils Canyon and quickly becomes a rocky jeep trail. I could have driven it in my Ford Explorer Sport but it would have been a very slow ride as I negotiated over the rock obstacles. However, on ATVs the ride was much faster and more enjoyable. 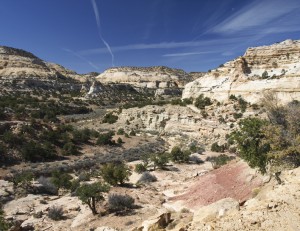 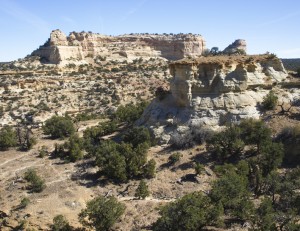 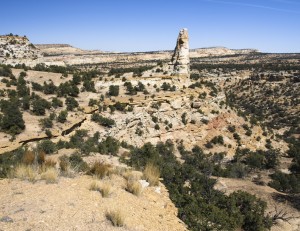 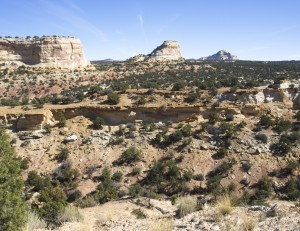 Along the road, we were passed by much quicker dirt bikers. (ATV’s may be faster than jeeps, but we are turtles compared to motocross dirt bike.)

Also along the way, we passed a small herd of wild horses. From the many tracks in the area, this seems to be a popular area for wild horses. I even noticed one set of horse tracks that showed that they had horse shoes. Either someone had turned their horse loose or a horse had gone rogue and joined a wild herd.

The biggest problem with riding ATVs in an area with wild horses is their tendency to “mark” their territory (usually in the middle of a trail) with horse droppings that grow taller and taller over the years. After a while, this becomes a formidable trail “obstacle”. (Insert joke here.)

We stopped at “Shepherds End” to examine a marble monument that documented the killing of a sheepherder back in the sheep vs. cattle war era of the 1900’s. Then we drove a short distance down the road to the Copper Globe. 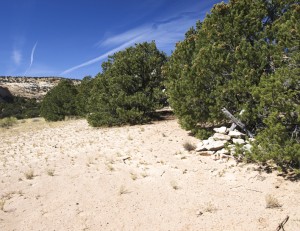 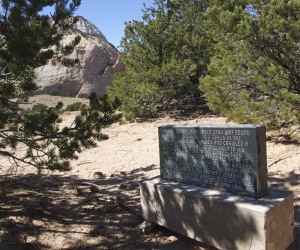 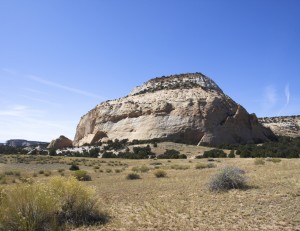 The Copper Globe refers to an old copper mine on the side of a sandstone dome. The Copper Globe Mine has long since been abandoned but there are still miner’s shacks and open mine shafts which makes the area interesting to visit. Here we caught up with the dirt bikers who turned out to be a bunch of 25 to 30 year-olds from the Salt Lake and Ogden area.

We wandered around the mine area for a while and I even found a couple of Indian petroglyphs on the nearby cliff. I wonder if Indians utilized the ground level copper deposits somehow.

We also drove around to the south side of the sandstone dome where we found more miner shacks and a single shaft that is now surrounded by a chain link fence to keep people out and to keep idiots from falling in.

Back on the main road, we continued south to Link Flats at the edge of Reds Canyon. Here we drove the side roads that took us out to wonderful lookout points overlooking Reds Canyon and fantastic vistas of the area. Here we could look far to the south where we imagined Seger Hole and the vistas we enjoyed on a previous ATV trip. This was just a different view of the same areas of the interior San Rafael Swell.

One of the roads took us through a cut in the cliffs and out on a ledge overlooking Reds Canyon. We could then ride a road along the ledge until the ledge ran out at a sheer cliff.

As we parked the ATVs so we could walk over to the edge, I noticed that there was a bag under a nearby cedar tree. It turned out to be a RMI food pack that someone had stashed. The plastic was weathered but still viable. I’m guessing that it had been there for at least a year. I don’t know how anyone would end up there needing emergency food though. Interesting. 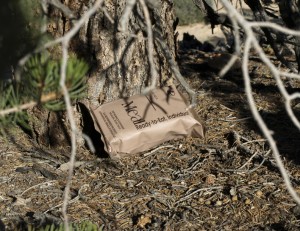 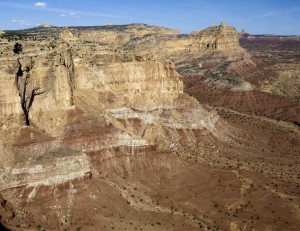 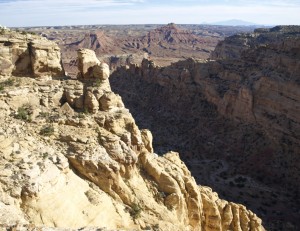 Once we had explored most of the side trails, we ended up taking the trail west down Cat Canyon. This was mostly a drive down the dry sand and shale creek bed. By then, the shadows were growing long (I hate these short fall days!) so we turned around when the road left the canyon floor and joined a nice Emery County road heading west. It was obvious that this road was much better than the one we had come in on. This was definitely a better access road into Link Flats.

On the way back, we stopped at an area on the north slope that included a number of Ponderosa Pine trees, which seemed out of place for the area. There we found an old collapsed metal dam that they had built to hold back rain runoff water, to use to water cattle. It had collapsed many years earlier but we were surprised to see how heavy the metal was. I would have been quite an effort to build this way out in this remote area. 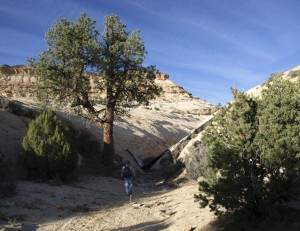 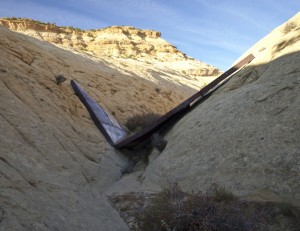 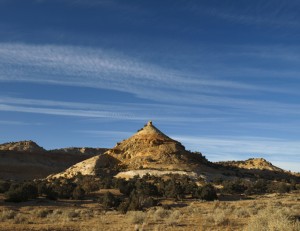 It took about 45 minutes to hurry back to the vehicle and we got there just as the sun was setting. Total ATV mileage for the day: 36.6 miles. 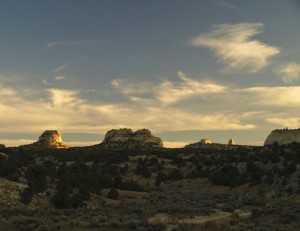 On the way back home, we took the Emery cutoff road which we had never driven before. It was a slower road but it cut off a number of miles. We need to go back that way in the daylight to get a better look.

Before we arrived in Castledale, we found that we had a flat tire on the Explorer. We limbed into Castledale and parked next to a Maverick station so we could use their air compressor. The tire leaked badly when pumped up so we used the Maverick lights to change the tire.

After a stop in Price for dinner and another in Spanish Fork Canyon for a nap, we got home about midnight.

Another excellent day exploring another corner of Utah!