Exploring the roads near Escalante Utah

From the grinding of my wife’s teeth and the depth of my wife’s fingernail marks in my arm, I was able to determine that it was time my wife and I had a weekend getaway together. (Isn’t it amazing how husbands are so good at interpreting these subtle hints?)

Friday morning we threw our bags in the Ford Explorer and headed south. My idea of the perfect getaway involved going to southern Utah. My wife didn’t care as long as it was out of town. Perfect!

We drove leisurely towards Escalante Utah, pausing for a few pictures in Scipio, Loa and Teasdale Utah. 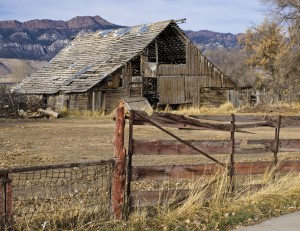 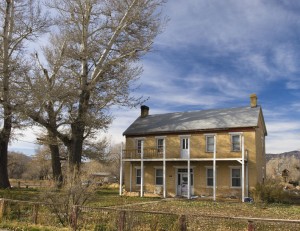 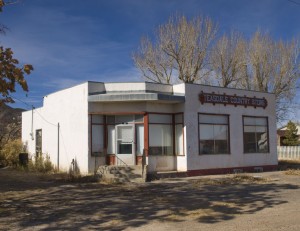 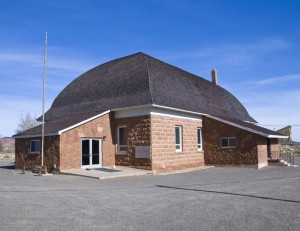 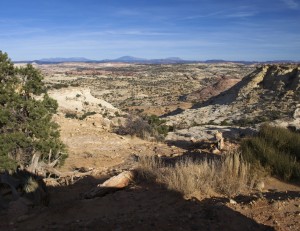 My goal was to find out how many of the roads and jeep trails were left now that the Escalante/Grand Staircase National Monument people had finished closing trails that they deemed “unnecessary”. I was surprised to find that the main roads were still open as well as a few side roads that were necessary for the few ranchers that were still running cows on the legacy public ranges. The main Old Sheffield Road was terminated to vehicle traffic several miles short of its previous end. I decided that this wasn’t too serious. However, I discovered later that I had missed one side jeep trail off of the road that ends at the northwest side of Red Breaks. I’ll have to go back some time and check out that road. 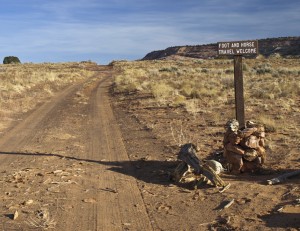 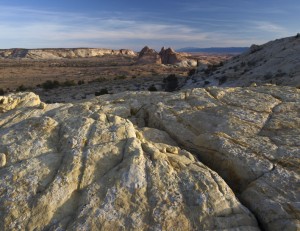 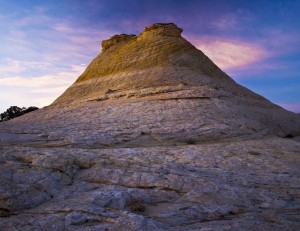 This area turned out to be littered heavily with Moqui marbles which are iron concretions that can form in sandstone. I finally got to show my wife what they looked like. 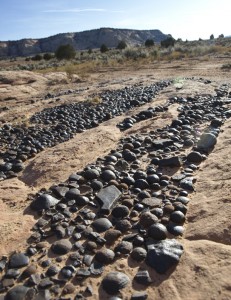 With the day light ending before 6 PM, that was about all we had time for that day. We drove to Escalante for dinner and a room at the Circle D motel.

Saturday morning after a nice omelete and French toast breakfast, we drove out the badly wash-boarded Hole-in-the-Rock road for ten miles and took the Harris Wash road heading east. Again, my desire was to see the terminus of the main road and every side jeep trail. 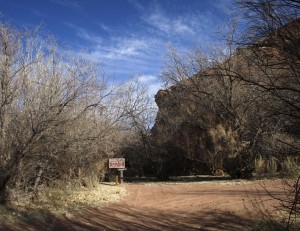 Not long after the trail turned to the east again, we got stuck in deep sand. By backing up and pulling forward until I could feel the wheels start to sink, we loaded the tracks with dead brush and were able to progress back about four feet at a time. I was finally able to grap enough traction to suddenly propel us out of the sand. Since my wife was pushing from the front, this left her doing a “face plant” in the sand as I backed up. (Thank goodness for soft sand and an amused wife.)

As it turned out, this was exactly where I needed to park anyway. I wanted to do some hiking up into the sandstone hills to look for a unique stone structure that I had heard was up there. My wife wanted to sit in the sun and enjoy the quiet. (I’m not sure what made me the most nervous, leaving her alone or going hiking alone.)

I headed off up a sandstone bowl that quickly climbed to a peak. The sandstone was very similar to the rock veins of the popular Coyote Buttes and “The Wave” area just over the Utah/Arizona border. However, this rock was not so colorful. Still I spent quite a while hunting for pictures that showed the sculptured rock and wispy clouds above. For the first hour or so, everything was perfect. 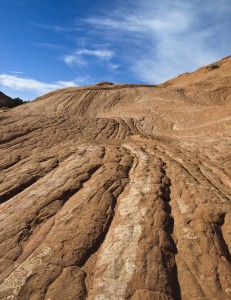 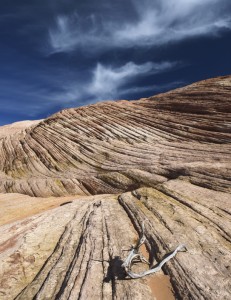 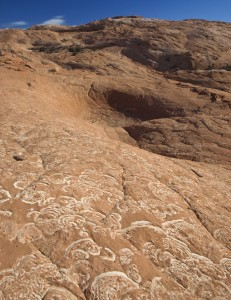 As I climbed towards the highest point of the peak, I was surprised at the number of natural tanks on the sides of the peak. I had to hike out to the steeper edges to make sure none of the deep tanks had broken through to make natural arches. I didn’t find any. Nor did I find any tanks with any water still in them. They would all probably be full in the spring though.

As I approached the highest point, I hiked around to the steeper east side were I found the rock structure I was looking for. For a lack of another name, I called it “The Quag Pit”, a quag being a water pipe used in the middle east (and by marijuana smokers) and the root of the word “quagmire”.

I was glad I had a camera and took pictures because I really don’t think I could adequately describe The Quag Pit. It is a large eggshell shaped rock cone stuck on the side of sandstone cliffs, with part of the top eggshell shaped rock missing as if someone had knocked the top off to get at the egg inside. This allowed a view into the center where a large core rock sat in a sea of yellow mud. (Yoke?) The inside is large enough for a small house where the center core rock sat. By tossing a rock it, I confirmed that it was indeed mud that filled the bottom. I image that the mud was very deep since there was no place where mud and water could pore out. I also noticed that some Moqui steps had been carved in the steep wall at one end. I don’t know if this was done by ancient Indians to access scarce moisture or if they were carved by more modern people to afford an escape path for anyone stupid enough to end up down there. (I could tell that even the shallow Moqui steps would not have been enough to get me out of there. It was still too steep for most people to climb.) 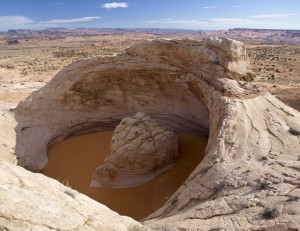 This bizarre geological curiosity turned out to be MUCH larger than I expected. With no evidence of volcanic influence, I was left wondering how this could naturally form. Some kind of bubble in the sandstone, I suppose.

As I was attempting to take pictures from different view points, the weather turned cloudy, cold and very windy. It was like Mother Nature didn’t like me being there. I finished climbing to the top for a look around before descending the west flank into another sandstone bowl and following it south out of the hills. This let me strike the road not far from where I had parked. 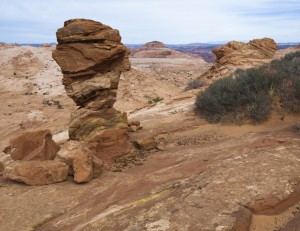 Back at the Explorer, I found my wife had retreated into the vehicle to avoid the wind and was sound asleep. We turned around and were headed back down the trail when the clouds passed and the sun came out again.

The only other major trail that we could locate took us east to Little Valley where the road ended at the edge of a wash that had eroded the bank and road away. We passed only one other road without exploring it. It appeared to head east towards the Escalante River drainage in the far distance. Perhaps I will be back another day to explore it.

Since my wife had obligations on Sunday, we headed home again arriving about 10 PM.

I found the weekend to be most enjoyable. My wife says she will let me know the next time she is ready to go on another of my “weekend getaways”.