Saturday morning found David and myself in the Explorer, pulling the ATVs on the trailer and heading for the northeast side of the San Rafael Swell. After refueling in Wellington Utah, we drove southeast towards Green River Utah and exited the highway just a few miles after Woodside Utah. We then drove west to the old highway, passed under the railroad just as a train was passing over (loaded with gravel?) and then headed west again.

We found a good place to park the Explorer and unloaded the ATVs. However, the yellow ATV that I usually drive, was having problems with the rear brakes locking up. I have had problems with the rear brakes before but they had always released enough to ride anyway. This time, the brake was locked and would not release. We finally ended up loading the ATVs up again on the trailer. There would be no ATV ride that day.

We pulled the trailer further west until we found a side trail that allowed us to mostly conceal the trailer and ATVs. We then left it there and proceeded on in the Explorer.

Not far to the west, we took a south jeep trail which took us past the gate for “El Rancho Not So Grande” ranch. The jeep trail somewhat paralelled an old railroad grade that was constructed about 1881 but never completed. The railroad was supposed to join Green River Utah with Salina Utah but a later route to Price Utah won out instead. 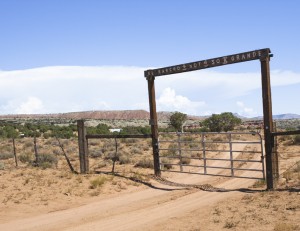 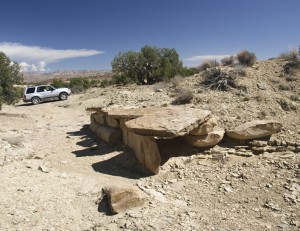 About the time the jeep trail joined the Cottonwood Wash area, we parked the Explorer near the power lines and began hiking west. Several hours later, after moving northward into several other washes, we finally found the drainage that included a class “C” natural arch called Heaven Arch. 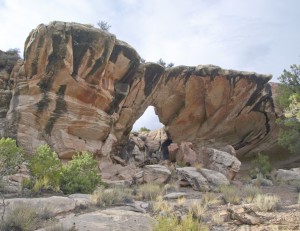 I had been here a number of years earlier and most of the hike was not how I remembered it. On the previous hike, I had tried to return by staying high at the top of the washes. Not too far from the arch I had found an old iron bed frame set up in the cedars. We tried to follow the same route but I didn’t see the bed frame this time. 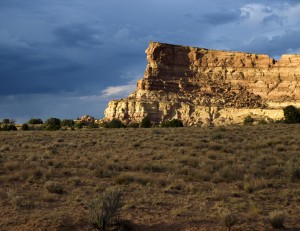 All day long we had been watching thunderheads form above the distant hills. By the time we got back to the Explorer, the clouds were producing rain not far away and seemed to be heading our way. We drove back down the jeep trail and spent a few minutes watching a lightning storm roll across the top of Cedar Mountain to the northwest.

By the time we had arrived back at the ATV trailer and hooked up again, we were starting to get a few drops of rain.

It was long after dark before we got back to the main highway where we could finally stop and eat our Subway sandwich. We missed most of the rain. In Wellington Utah, I loaded up on caffeinated soda to keep me awake on the long drive home. I was in bed by midnight.