By working like crazy after work each night to get all my yard, garden and house chores done, I can free up Saturdays for exploring southern Utah… when funds allow it. This week, a cold front moved in and kept me from outdoor and garden work. Tuesday was a regular 80 degree late summer type day. It froze Wednesday and Thursday nights so now the garden is gone. (YES!) That helped free me up for a Saturday of exploring.

Saturday was forecast to be only partly cloudy as a new storm was not scheduled to move until Sunday, and that was good enough for me. However, after other issues arose Friday evening and early Saturday morning, I didn’t get much sleep Friday night. By the time I hooked up the ATV trailer and picked up David, we knew we were getting a late start on the day. We decided to explore Wild Horse Creeek just west of Goblin Valley State Park, which would probably only be a partial day ride on the ATVs.

With clouds moving in from the south, it was overcast all the way to Wild Horse Creek and all day while we were in Horse Canyon. It even looked like it could rain a bit when we were on our way out again.

We parked the Explorer near the head of Wild Horse Creek and passed quite a few campers who were sheltering around the base of the mesa. On the east side of the mesa was Goblin Valley but the west side also sported some stone “goblin” formations and seems to be a popular place to camp.

We unloaded and headed south down Wild Horse Creek. This was a fairly easy ride and we were glad to see that it was dry even after the storm earlier in the week. (Nearby Hanksville supposedly got .8 inches of rain — a LOT for Utah.)

About four miles down the canyon we passed a pickup truck that had just turned around and headed back out again. The trail did get a little rocky there. We didn’t see any recent vehicle tracks in front of us for the rest of the day.

The canyon didn’t seem like the kind of strata that would contain natural arches and we were encouraged when a think layer of sandstone appeared further down the canyon. Suddenly, there were possibilities of finding natural arches — but we didn’t see any. In fact, finding anything to take pictures of in the canyon, was a little challenging. Especially when the gray skies also hindered picture taking.

The ride down the canyon was pleasant enough. It is kind of exciting not knowing what you are going to see around the next bend. Most of the riding was in the dry stream bed with occasional signs of the road heading up over a hill. We had to stop several times to move rocks or check out an obstacle. Mostly the ride was just uneventful. 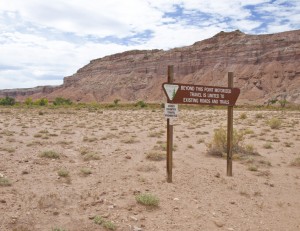 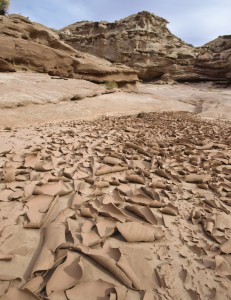 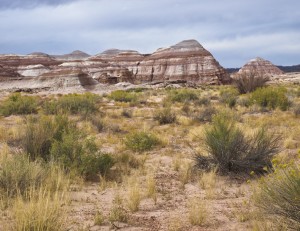 After about ten miles, we hit the confluence of the Muddy River (which will turn into the Dirty Devil River not far away near Hanksville Utah). Here we encountered some water and mud which proceeded to bury David and his ATV. I had to use the wench on my ATV to assist and almost couldn’t pull him out again. 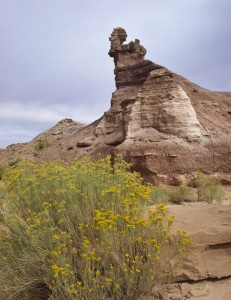 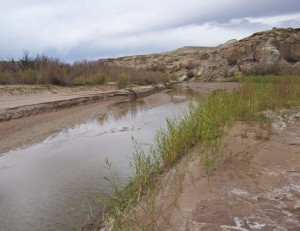 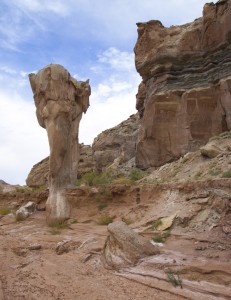 The Muddy River was only about six inches deep and a dozen feet wide but it is a year around flowing stream coming out of the San Rafael Swell. Therefore, the mud along the banks is very unstable and can be troublesome/dangerous for hikers. We decided not to explore further and instead, headed back up the canyon again.

By the time we arrived back at the Explorer and trailer, it was cool and breezy with the sun peaking out under the clouds on the rim of the nearby San Rafael Swell. We probably could have ridden around for another hour but there really wasn’t anything to see in the area. Instead, we just headed for home again. 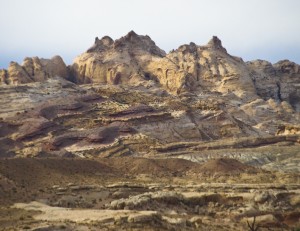 My wife was quite surprised to see me home so early and immediately jumped to the conclusion that something serious and bad had happened. Unfortunately, I didn’t have a scary story prepared so I lost a perfect opportunity. Oh well… next time.