Saturday finally rolled around after a LONG work week. David and I grabbed the ATVs and headed back to the east side of Boulder Mountain south of Torrey Utah. The hot weather had cooled off at least 10 degrees and there was even a chance of rain in the northern part of the state. We were looking forward to a cooler ride on the east side of the mountain.

It was noonday by the time we got to Torrey so we stopped for a burger at our favorite burger joint now called “Slackers” (it used to be “Brinks”). Then it was a short drive up Boulder Mountain to the Oak Creek campground area.

We parked the Explorer at the same parking area as we did two weeks earlier. We then rode east down the Rosebud Trail until we arrived at the intersection of the Slickrock Trail where we headed south. The Slickrock Trail took us down into the Oak Creek drainage and then east towards Oak Creek Canyon. 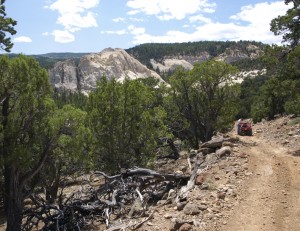 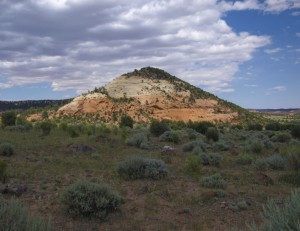 Like most of the trails around Boulder Mountain, this trail again proved to be extremely rocky. However, we didn’t realize how rocky it could get until we left the meadows and trees level. Once we started dropping into the cedars, the trail was NOTHING but round boulders in many places! That made the ride rather slow and bumpy. 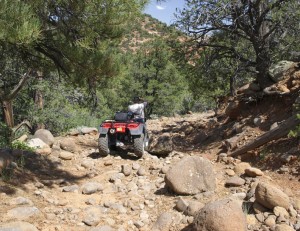 Finally the trail entered Oak Creek Canyon and the terrain started getting interesting. We stopped at the mouth of a short canyon on the south side and soon found a new class C natural arch and a few Indian petroglyphs. 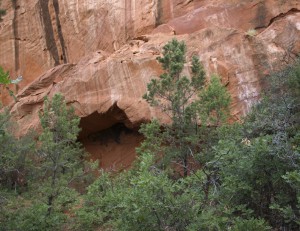 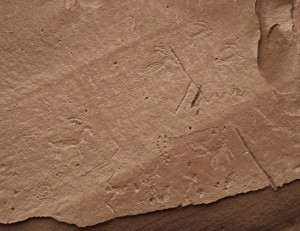 A short distance further down the canyon, the Slickrock Trail leaves the canyon bottom and climbs a steep hill to the north. The only difference with this steep hill was that the boulders were larger. We proceeded to bounce up the hill until David was less than 75 feet from the top where the trail got too steep and the boulders too big to bounce over easily. David finally had to jump off the ATV and hit the breaks to keep it from going over. When I caught up to him, I was able to park on the side and then assist him. I grabbed the front while David got back on the bike. He could then back down to a safe area while dragging me through the rocks. 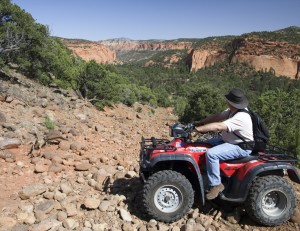 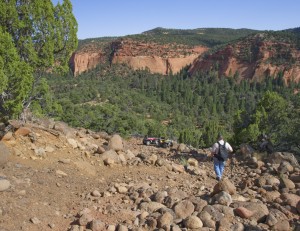 Instead of going back down the “trail” we hiked up on foot to take a look around to see what we were missing. From the top we could see a natural arch across the canyon in the distance. We drove the ATV’s back to the bottom of the canyon to see if we could hike up to this new arch. As we are trying to find a place to park the ATV’s, we found a jeep trail that heads down Oak Creek instead. We decide to ride down the canyon as far as the jeep trail will take us and come back another day to visit the new arch. 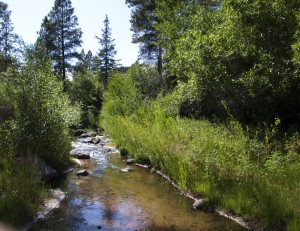 I really didn’t think the jeep trail would go very far but it surprised us by going several miles to the border of Capital Reef National Park, deep in Oak Creek Canyon. Over the years, the jeep trail had washed out in several places but ATV’s had created a work around route. One place where the old road had disappeared, the new trail required dropping off a sandy bank into the streambed, crossing the stream, up the opposite side for a short distance and then crossing the stream and up a short hill to the old road again. However, even the work around trail had washed out some with a deep rut in the middle of the track. Going down wasn’t much trouble though. 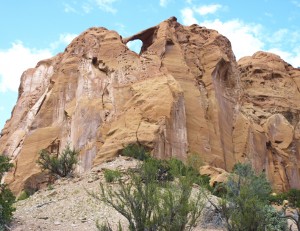 Valentine Arch was only a class C arch but still an exciting and impressive find. That alone made the whole trip worthwhile. However, a little further down the trail, we spied another class C natural arch on the canyon wall far to the south. Further down the road again, we spied what could be yet another natural arch. However, if it is a true arch, it will be the ugliest arch we have ever found. (I want to go back and hike out to it to verify that it is an arch. We need an arch called Butt Ugly Arch.) 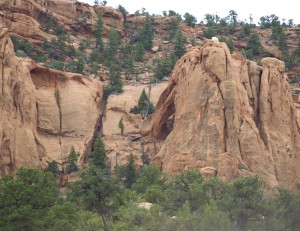 At the end of the trail at the Capital Reef National Park bouondary, the foot hiking starts. From the ATV’s we walked out to a point that looked down into more of Oak Creek Canyon and south up Bear Canyon. It was a beautiful view. On the way we found a couple of Indian pit house and parts of a metate grinding stone. Kewl! We take pictures and touch nothing. 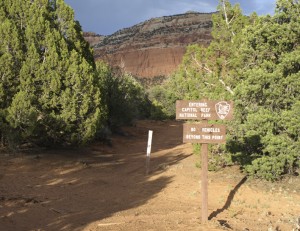 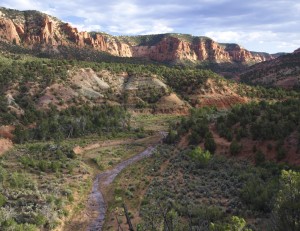 The canyon is wonderful! It was now late in the day so the last pictures we take are of the canyon with deep shadow. We then head back knowing that we are going to be traveling the last of the road in the dark. 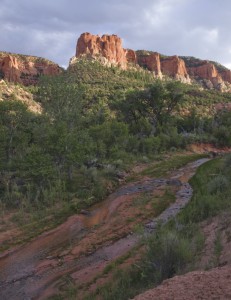 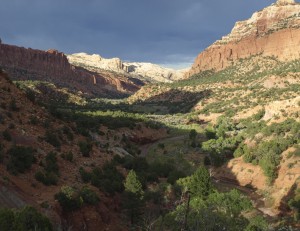 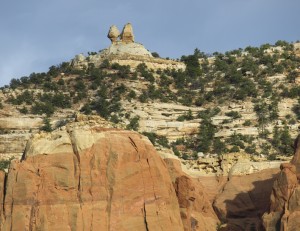 David was some distance ahead of me when I got back to the steep and sandy part of the new road that worked around the old road being washed out. David apparently didn’t have any problems getting up and I wasn’t expecting any either. However, as my bike was climbing up the bank and had almost reached the top when everything went wrong. Suddenly, the front of the ATV was straight in the air and the whole bike was tumbling back on top of me. I remember thinking for a short moment about how important it was that I maintain control of the bike and then immediately switching my thoughts to how important it was that I get out from under it before it squashes me. I also remember yelling a loud expletive as I tumbled backward. All arms and legs then began propelling in ways to hasten the moving of my body away from the bike. Miraculously, I managed to get out from underneath the path of destruction as the 600 pound ATV came back over the top, slammed the ground where I had just been, and then proceeded to roll sideways down the hill until it hit a tree and stopped. I sat in the dirt checking to see where my physical damage occurred and was surprised to not find anything serious.

The ATV was still running so I hurried down to it to turn the engine off. It was lying on the side and I was worried that gas and/or oil would be leaking out. I grabbed the ATV and managed to roll it upright again. Then I had time and mind to check for real damage but I really didn’t find any. Nothing bent, nothing broke.

It must have been the soft dirt.

I managed to get the ATV started again and drive it to the bottom of the hill. I turned it around and drove part way up the hill. There I parked it to await David coming back to see what had happened to me. That took only a few minutes. We were then able to hook a towing strap up to the front of my ATV which allowed David to assist in keeping the front wheels on the ground as I tried it again. Even on my second attempt, the front wheels left the ground and the ATV attempted to roll a second time. However, David was able pull the wheels down again which allowed me to gain the top… this time.

I was shaken (and amazed that I really wasn’t hurt) but evening had come and we had to get out of there. We were both tired and sore by now so the rough parts of the return trail were especially bothersome. On the way back, we even had a few raindrops from a passing cloud.

At the end of the day, it was one of our shorter ATV drives. Only 25.5 miles.

After several stops for short naps and to purchase more Mountain Dew, I was home and in bed by 2:30 AM. At about 4:30 AM, my daughter called to report that she had locked the keys in her car up in Salt Lake City. This was going to require that I drive down to Spanish Fork to get keys and then to Salt Lake City. However, on my way back up through Orem, she called again to report that she had gotten a hold of a locksmith who had let her into her car again. (That is going to cost someone two or three hundred dollars!)

So I could go home again. However, on the way back and forth, I was beginning to experience some pain on the left side of my stomach. By the time I got home again, the pain was rather significant so there was no option for going back to bed. By about 8 AM, the pain had gotten worse and I was in trouble. My wife was staying with her mother up in Salt Lake and when you are in bad pain, you need your spouse. I called her on her cell phone to let her know what was going on.

By then I had figured out that I was experiencing a kidney stone since I had one seven years prior to this. That required a trip to the hospital emergency room for a single shot of morphine.

Soon I called my wife back to let her know that I couldn’t wait any longer and that I would be driving myself to the hospital.

You would think that when you are in that much pain, you would drive fast to get to the hospital. However, I could barely creep along. I almost had to stop several time just to walk around or be sick… but I finally made it to the American Fork Hospital where I entered through the emergency wing. The lady checked me quickly and I was glad there was no one else to process first. After the necessary blood, blood pressure tests and blood line tap, they were able to give me a shot of morphine through the tap.

(Ahh… Isn’t this supposed to stop the pain?)

The third morphine shot took it down to about five, which is still too painful. They then switched to something else and by the time my neighbor John, my son & his new wife, and my wife had arrived, I could almost stand the pain level.

At one point, they took me to a room with a big doughnut that took 3D ultra sound images of my innards. (Something about checking for internal injuries after rolling an ATV… or something like that.) That was interesting. This also quickly verified the “problem” kidney stone was about to exit the painful area anyway.

By early afternoon the problem has “passed” and I was able to go home for a little sleep. After a couple of hours of sleep, I was wide awake again and feeling good. I was ready to go to work on Monday morning.

Wow! What a weekend.