All week long, the weatherman had been forecasting storm for the weekend. By Wednesday the forecast was just for overcast skies but much colder. By Thursday (Turkey Day), the forecast was cloudy but colder. Friday it was partly cloudy and only slightly cooler. David and I decided we could squeeze in yet one more weekend on ATVs, exploring southern Utah, before the dreaded winter sets in.

Saturday morning we headed back to the north end of the San Rafael Swell and drove east of the head of Calf Canyon, which is where we ended our ATV exploring three weeks earlier. This time we took the south fork and parked on Big Flat, next to a pickup truck that had obviously unloaded a single ATV and headed out the same dirt road that we wanted to explore.

After exploring different trails heading southwest, we ended up on the rim of the cliffs overlooking the San Rafael River with Assembly Hall Butte to the west. 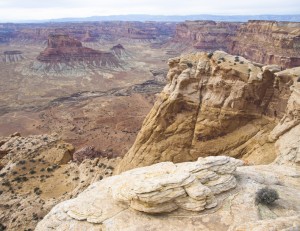 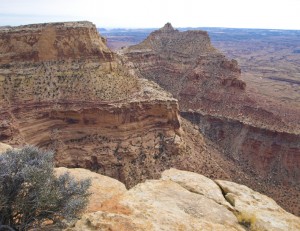 After a little walking around, we were able to see what looked like an obvious natural arch (lots of water stains running down the back wall) in the cliffs to the northwest, across a side canyon. It wouldn’t be possible to see this arch from the Mexican Mountain road far below us. Nor would you be able to see it by hiking up the side canyon from below. Even exploring the cliffs above the arch would not allow you to see it. As far as I could tell, you would only be able to see it by hiking out to the edge where we were. Because of the way it was hiding in the cliffs, I called it Ambush Arch. 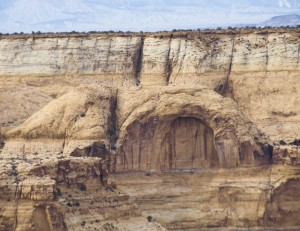 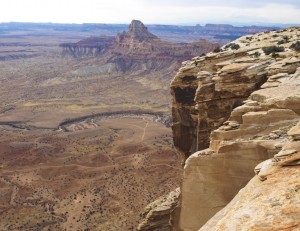 I was trying to locate the jeep trail that would take us to some Indian pictographs located somewhere at the southern end of Prickly Pear Flat. However, finding the right trail proved difficult since the roads had all changed since our US 7.5″ topographical maps were printed in 1983. We actually ended up going clear back to the Explorer and trying the dirt roads further north off of the Big Flat road. After several attempts, we ended up back on our first dirt road again. 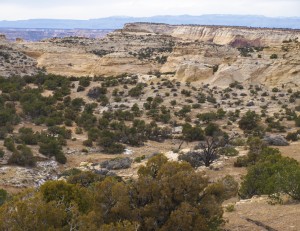 David thought he saw a trail that we hadn’t tried yet back down the main trail so we headed back to the southwest again. After climbing up the rocky south side of a ridge, we then took a trail which descended the opposite north side of the short ridge. On the way down we stopped to pump up one of David’s ATV front tires which seemed to have developed a slow leak. As we were finishing up, a single ATV rider appeared on the trail coming from the opposite direction. This turned out to be Dennis Udink with his dog Torrey, riding in a padded carrier mounted on the front of the ATV.  (See response to this post.) He stopped and confirmed that we were now on the right trail and that we could find the Indian pictographs at the end of the trail by making our way down the cliffs. Since the daylight was quickly disappearing, we hurried to the end of the trail, parked the ATVs and made our way down the cliffs on a slope that looks like it could have been cut by machinery for cattle or jeep access to the lower flats. 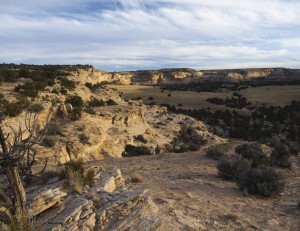 Once on the lower flats, we hiked south along the cliff base. At one point there was a small double alcove high on the cliff wall that seemed a reasonable location for ancient Indians to inhabit (except for the fact that there was no water supply nearby). I climbed up high enough to see that the double alcove had a small hole between them which meant that the alcove was actually a class D natural arch. However, there were no pictographs. 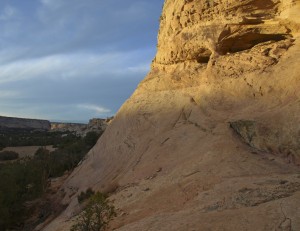 By the time I had explored along the cliffs, I was around the corner of the cliffs where I could see a fence structure along some cliffs further to the southeast. This fence structure is of the same type that we have seen the BLM build around other petroglyph/pictograph sites. I climbed down to the flats again and we hurried to the nearby fenced area, arriving just as the sun disappeared over the hill. 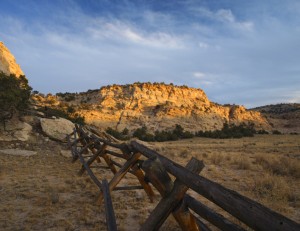 This was a wonderful pictograph site. At one time in the distant past, it was even better. However, time has not been kind to the rock art with much of the different scenes simply missing as the sandstone flaked off over the years. Cattle rubbing against the lower parts probably helped to accelerate the process. However, the red painted pictographs that were left were fantastic! 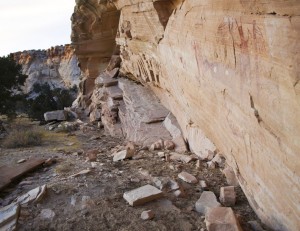 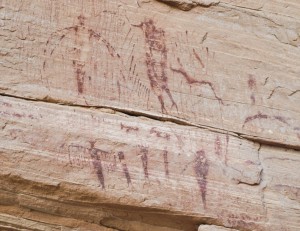 The most interesting scene seemed to involve a large dog figure with two white spots on the sides. The dog figure had a collar and seemed to be attacking a group of people with the main figure of the group with his hands raised high in the air. The dog may have been controlled by another group of people pictured behind the fierce dog figure. 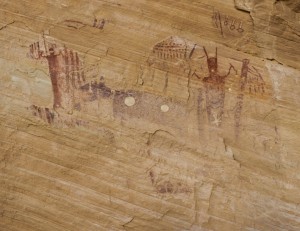 Because the area lacked a year round water source, this site would not have been used for habitation which means this was a hunting camp and/or a ceremonial site. However a hunting camp would usually include figures of mountain sheep or mule deer and this site had neither. I am guessing that the area was ceremonial and the pictographs depicted an actual event that was important to the ancient inhabitants.

By the time we had taken evening pictures it was time to hike back to our ATVs at the top of the cliffs. It was then a rather chilly ride back to the vehicle in the dark. Riding in the dark was something we were getting used to but I’m glad we didn’t have too far to go.