Return to the Moab Slickrock Country

David and I again took a Friday off from our separate jobs so we could spend Friday and Saturday exploring southern Utah on the ATVs. This time we headed south on Friday morning and stopped in Moab Utah long enough to pickup gas and food. We also reserved a room at the local Motel 6 since available rooms in Moab have a tendency to completely disappear on Friday nights.

We then headed east on highway 128 which follows the Colorado River towards Cisco Utah. Just after crossing the “new” Dewey Bridge, we pulled off the road and unloaded the ATVs.

I hadn’t been down this road since the 90 year old Dewey Bridge burned down in April 2008. The fire was started by a 7-year old boy playing with matches along the river bank. It was sad to see just the cables spanning the river where the old bridge used to be. They just don’t make swinging bridges like that anymore. 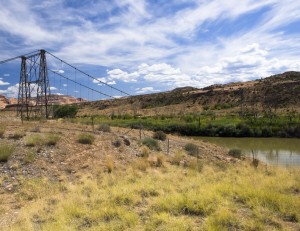 We then headed west on the ATVs down the Kokopelli Trail which parallels the cliffs until it breaks out on top of the mesa. The trail was rocky but completely different than the round black rocks that we had battled with on our recent trips to the east side of Boulder Mountain. It was nice to get back to slickrock country again. 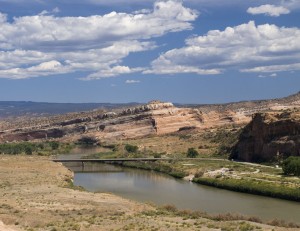 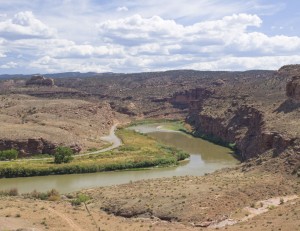 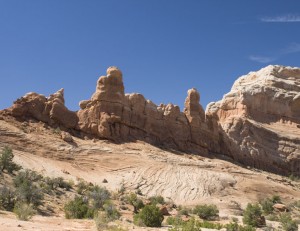 It had been over ten years since we had been down this trail in a vehicle and I was surprised that I dared take anything other than an ATV up that trail. Perhaps the trail is worse now.

Our first stop was at Arrowhead Arch which was very close to a side trail. At that point we didn’t realize that we had already driven by Porthole Arch. Then it was on to Squaw Window Arch where we realized that we had missed an arch. We decided we would get it on the way back since we had to come back that way anyway. 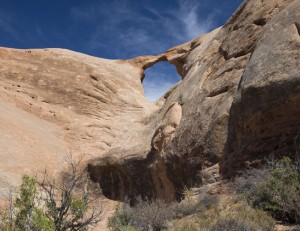 [NOTE: Word has been received that this arch collapsed some time during the first half of 2010.] 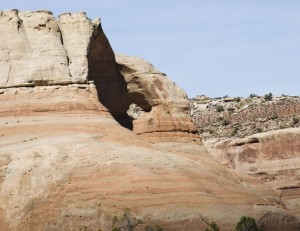 We then took a longer trail which took us along another cliff face where there were deep natural arches that Indians and area cowboys used to use for shelter. Several of the alcoves were more than a hundred feet into the cliff. Once even had a bit of a natural spring that they had tapped for a cattle trough. 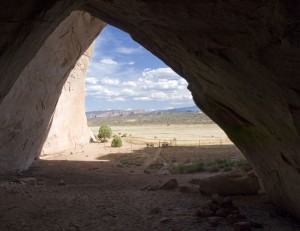 We then drove clear out to the cliffs that contain LaBoca Arch which we last visited by driving in from the Poison Strip end, several years earlier. We spent some time hiking around in the cliffs looking for another arch called Harrod Arch that was suppose to be in the area but we didn’t find anything. Again, it was too hot to be hiking and we were doing it anyway. It felt good to get back on the ATVs and enjoy some wind. 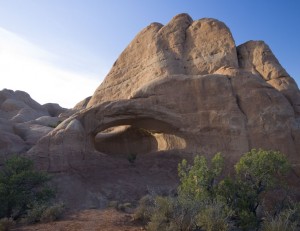 In spite of the day being mostly sunny, by the time we were heading back, dark clouds covered the western horizon to the point that it grew dark several hours early. By the time we got back to Porthole Arch, it was too dark to even take pictures. We would have to come back another day. Total ATV milage for the day was 23.1 miles.

Back in Moab Utah, we walked down to Dennys for dinner and then back to our motel room. I then spent an hour with really bad heartburn before I could get some sleep.

The next morning we found that the cable for the trailer lights had pulled out and gotten beaten up on the highway. We found a local auto parts store that sold us the necessary connector and wire to make a repair. After breakfast at McDonalds, we headed south to explore the area above the Moab Valley called “Behind the Rocks”. This is the same area we visited at the end of May though we didn’t go as far west this time.

Our first destination was Moab Rim Arch which can be seen in the high cliffs from the highway. Driving to the arch on ATVs required a LOT of rock crawling down some very rough trails. I know that I had taken a vehicle down this trail years earlier but there was no way to do that now. This was now an ATV and dirt motorcycle trail only! 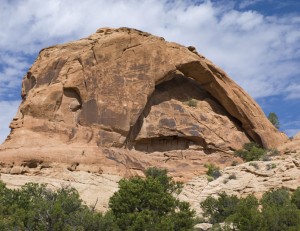 From Moab Rim Arch, we continued north for a short distance to the end of the trail where we climbed up the cliffs to visit Tukuhnikivista Arch. This is a small class D arch but because it is at the top of the cliffs, it makes for a great frame for pictures of Mount Peale and the La Sal Mountains at the other side of the Moab Valley. At the same time we were taking advantage of a partially cloudy day which was keeping the temperature down and made hiking possible. However, when the sun was shining, it would get hot really quick. 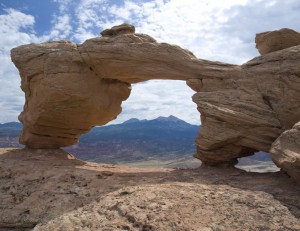 After descending to the ATVs again, we made our way back to the main road and then took the Behind-the-Rocks trail to the northwest. We were looking for another arch that we had visited years ago called Back of Beyond Arch but when we approached the drainage we were going to hike, the area didn’t look right. Also the trail was way too rough to have ever taken a regular vehicle on. Still we hiked up the drainage looking for anything what would be familiar to us. Where the arch should have been, there was a large boulder stuck between some rocks with a hole underneith… but no natural arch. 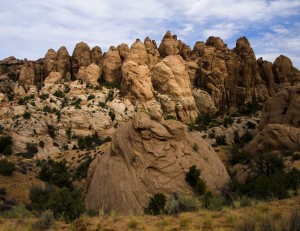 I left David to claw my way up a thick brush wash just to get a look around. At the top I explored the sandstone fins looking for new arches. While most of the fins were impossible to climb over, there was one fin that was cracked all the way through leaving a walkway about three feet wide and over a hundred feet long with the sides fifty or feet high on both sides. I walked slowly down this crack being careful not to walk up on any snakes which would have been hard to see in the dim light. Once I reached the far side, I found myself overlooking a small valley lined with sandstone fins. Really cool! 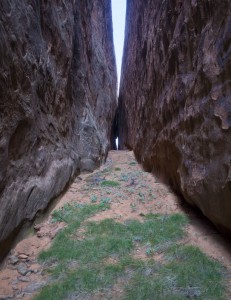 Once out of the crack, I hiked back to the cliffs where I could yell to David in the wash below me. We headed back to the ATVs but I was going to take a different path so I could see some more of this upper country. I didn’t really find anything new and soon found a break in the cliffs that I could descend. 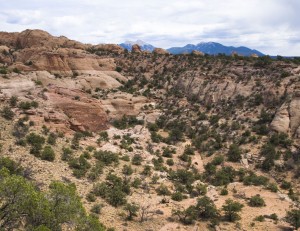 Once on the floor of this side canyon, there were the footprints heading exactly the same direction that I was. Again! (I would like to meet whoever that was that I ended up following and find out what they were doing out there.)

Back on the ATVs, the clouds had mostly disappeared and it was getting really hot. We tried to continue up the trail but it was so bad that there were some fairly dangerous parts. We finally turned around and headed back again.

By the time we got back to the vehicle and trailer, we were tired enough to want to head home again. Total ATV miles for the day = 9.1 miles. (But they were mighty rough miles!)

That afternoon, I was actually home before dark for a change.