Wednesday, September 16th, I left work early so my wife and I could drive down to Richfield Utah with our ATVs, to take part in an attempt at the Guinnese Book of World Records for the “Worlds Biggest ATV Parade”.

The previous record was 1632 ATVs at a parade in Minnesota. The Richfield Utah parade is part of the yearly Rocky Mountain ATV Jamboree, which is in its 17th year. I read about the event on a flyer hanging on a service station bulletin board in Green River Utah about a month ago. It sounded fun so we arranged to go.

The road trip was several hours long but we actually made better time than I thought we would so we spent some time driving around Aurora Utah taking pictures. 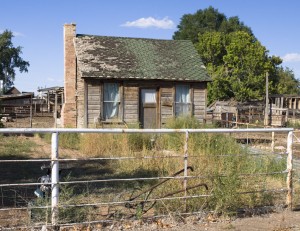 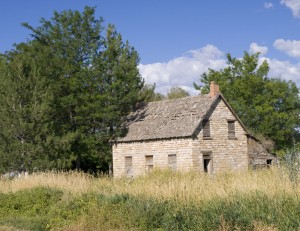 By the time we got to Richfield, the ATV line was just beginning to form. We parked the Explorer and unloaded the ATVs within 100 feet of the front of the line but by the time we drove around the block to get in line ourselves, we were about 500 machines back. And moreATV’s just kept on coming…. and coming…. and coming…. Soon they had filled the road and were being routed under the freeway and up a mountain road. From our location we could even see them wind up the road to the Richfield water tower. 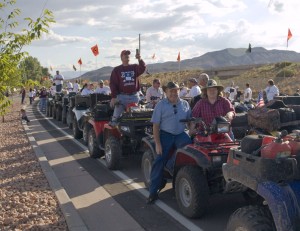 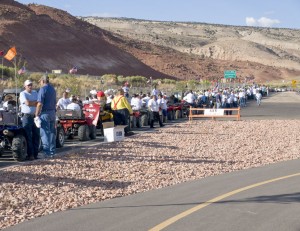 It was amazing! I couldn’t believe how many ATVs were there…. and they were everywhere!

We also got to see a lot of different bikes with a lot of different “options”. Parked to the side of us was a big bike that had every add-on under the sun loaded on it. There were mounted GPS systems, radios, speakers and even a keyboard — which I have no idea what it was attached to.

I had been speaking to a friend at work, Bob, who decided to also come down and bring his son. Among all these riders and bike, we actually found Bob riding down the sidewalk. He stopped to talk to us and took our pictures for us.

Then the parade started which involved a single file line passing in front of movie cameras set up to capturw the official count. The parade then head to Main Street and south down Main Street to the opposite end of town where we turned around and headed back up Main Street again. The street was lined with people who came to see the parade. Some ATVs actually threw candy for the children and there were a number of riders in costumes. Apparently, this is a big yearly event in Richfield.

Ok, I had fun! Driving an ATV down the middle of Main Street, ignoring traffic lights and waving to people along the way, was a real hoot! Nancy thought it was great! 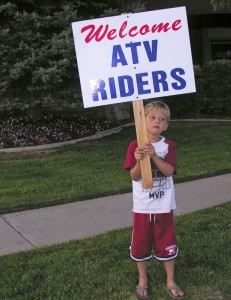 I took pictures and video but finally just went back to sit on the bikes and wait for the roads to open again. But the bikes just kept coming…. and coming….

This went on for an hour and a half before the last rider hit Main Street. It was then getting dark so we headed back to the Explorer where we loaded up again. Here we found that Bob had been parked right in front of us.

Since there wasn’t a good chance of finding a burger joint that wasn’t full of hungry ATV riders, we drove down the road to Salina and hit the Burger King there. While we were eating, here came Bob and his son, to the exact same burger stop. (Is he following us?)

It was late before we got home, unloaded and headed to bed. Total ATV mileage = 4.2 miles.

The next day we learned that the official number of ATV’s in the Richfield parade was 2014.

I am sure glad we went. That was fun!