Monday was Labor Day and I had taken my wife, one daughter and one brother, David to the family cabin near Flaming Gorge Reservoir for the long weekend. That meant that the following work week was only four days long. Somehow, that seemed like a long four days. Still Saturday did finally roll around which allowed David and I to load up the ATVs and head into southern Utah again.

This time we headed for the southeast side of the San Rafael Swell where we wanted to explore the Segers Hole area. We drove south from Price Utah to Emery Utah. We then continued south until we could pass under the I-70 freeway and the road became a gravel road. We were able to drive the Explorer pulling the ATV trailer as far as the Blue Flats before we parked the Explorer and started up the ATV’s. It was then a 20 mile ride around Cedar Mountain until we got to the rim of Segers Hole. 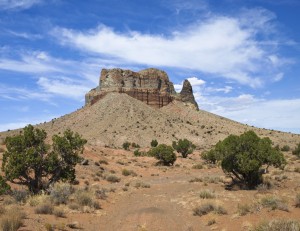 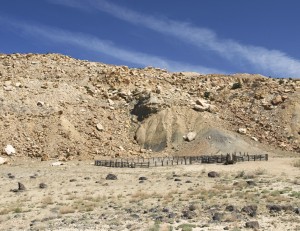 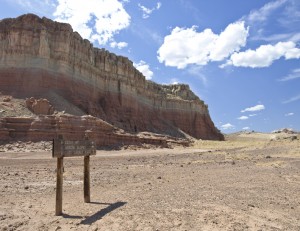 Before descending the dugway into Segers Hole, we wanted to try to get a look at a natural arch called Chimney Canyon Arch. We had tried to get to it the last time (years earlier) but had only been able to glimpse the top of the arch by looking straight down on it. This time we hiked along the ridge for about a mile where we could see it from across the canyon. Along the way, David spooked three mountain sheep but I was busy traversing a tricky section of a trail and missed seeing them. 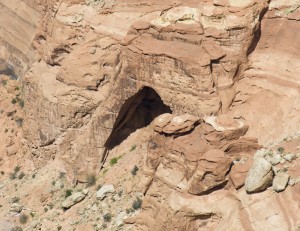 The view from across the canyon was fantastic. It reminded me of looking into the Grand Canyon. We spent some time with binoculars scanning the deep canyons for natural arches and other unique areas. Luckily, we didn’t see anything worth going into the canyons for. 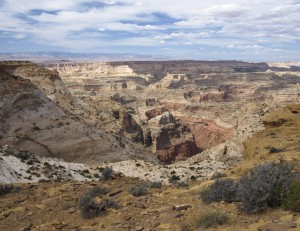 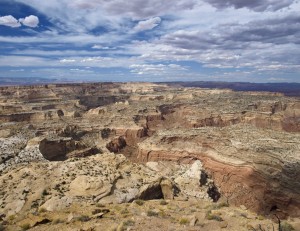 Once back at the ATVs, it was time to attempt the dugway into Segers Hole.

We had taken one of my Ford Explorers down the Segers Hole dugway years earlier and the jeep trail was rugged and rocky. I swore I would never take a street vehicle down the dugway ever again.

It was worse this time. I dove off the edge first and at one point I had to stand on the brakes while David climbed down the hill to rebuild the trail in front of me. Once I was able to get to a safe area, I then assisted David’s decent by hanging on the back so the ATV wouldn’t roll or tumble. It was ugly and we were glad to get to the bottom where the jeep trails were much smoother. 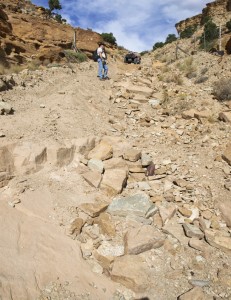 From this point, there were several jeep trails heading northeast, east and southeast. We started by exploring the road to the southeast which also let us access the most territory and took us several hours to finally reach the furthest extent of the trails.

The trail that took us along the southern edge of the Seger Hole bowl was the longest and we were able to get glimpses into two washes that drain out of Segers Hole and drop off the cliffs into the Muddy River to the east. It was interesting country but we didn’t find any new natural arches. The strata just wasn’t really the correct type for natural arch formation though we have seen a few in similar rock.

The east trail took us clear to the edge looking out into Kessle Country and Hidden Splendor below us. What a view! 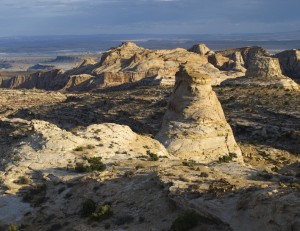 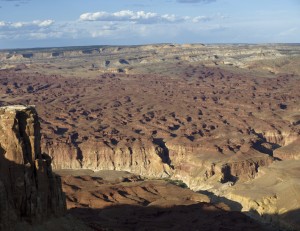 The north trail didn’t go far and we had already been down that trail the last time we were here. There weren’t any trails going into a small canyon to the east but we still got a pretty good look at it from the other trails. By then it was getting late and time to leave. We motored back to the dugway so we could climb out again.

The climb up the dugway turned out to be the most frightening thing I had done in a LONG time! David went first and I gave him plenty of room before following. Even in the lowest gear, we really struggled to climb the loose rocks and steep incline. It was impossible to stop or you would never get momentum to go up again. I had my hands full trying to pick the best route and keep the front on the ground. When I was able to glance up, I could see that David was working the ATV for all it had to get up the “trail”. Most of the trail was bad but there were several areas that were extreme! I just forced myself not to panic and keep going foot by foot. I don’t know how we got through but we finally found ourselves at the top. David immediately shut down his ATV and got off in order to walk around and shake off the adrenaline. I had to do the same. My hands were just shaking like I had just run a marathon. We were laughing like kids that had just got away with something big!

That scared me to death!

At this point, we had run the ATV’s a total of 40 miles and it was another 20 miles back to the Explorer. We headed down the road and spent the next hour enjoying a beautiful orange sunset. It was pitch black before we loaded up the ATVs on the trailer. David had to go a quarter of a mile further down the road so that his odometer read a complete 60 miles for the day.

It was about midnight when I arrived home that night after fueling up on caffeinated fountain drinks to keep me awake on the long drive.