Saturday morning we headed for the north end of the San Rafael Swell… again. This time we were headed for Box Flat and Big Hole Wash, just a bit further down the road from our last San Rafael Swell exploring trips. The day was indeed sunny but the temperatures never got above freezing. We bundled up as warm as we could and headed down the first side road we could find.

The first trail took us up a small canyon or wash heading west. Someone had parked a trailer not far inside the canyon so we referred to the wash as Trailer Wash. 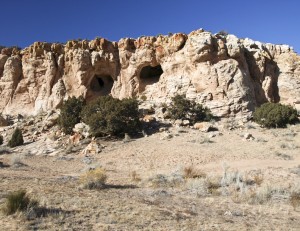 The road didn’t go far up the canyon so we parked the ATVs and hiked further west up the wash for about a mile. The orange and white sandstone walls of the canyon really weren’t the kind of strata that we would usually expect to find natural arches in but you never knew until you looked. It was a good chance to get warmed up and enjoy the area. Out here, you never know what you might find.

When we finally topped out the end of the wash, we tried to hike to the top of the closest hill to get a look around. The view from the hills didn’t let us see anything interesting so we looped around to a short side canyon of Trailer Wash and dropped back into the canyon for the hike back to the bikes. 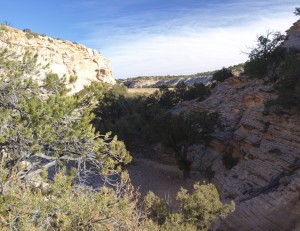 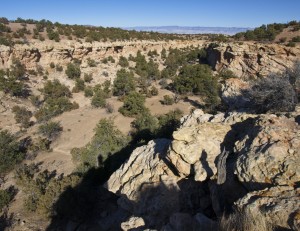 We then tried a similar wash a short distance to the south with the same rock strata and also running east and west. This wash had a stock pond near the mouth so I called it Pond Wash. Again we didn’t find much of anything interesting and had soon exited the wash again.

Back on the main road, we hit the end of the maintained road and struck out on a jeep trail heading east along the edge of Big Hole Wash. 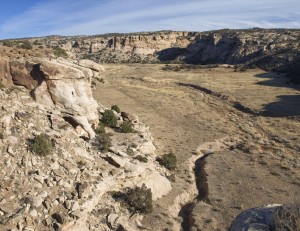 About the time that the wash started bending to the north, the trails quit but not before we had spied a class “C” natural arch (defined as big enough to drive a jeep through) just below us. 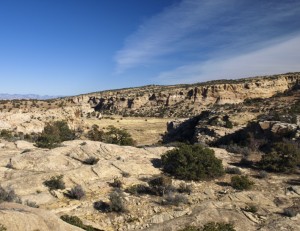 We managed to find a crack in the cliffs to scramble down and take a few pictures of this arch which we called Big Hole Wash Arch… naturally. 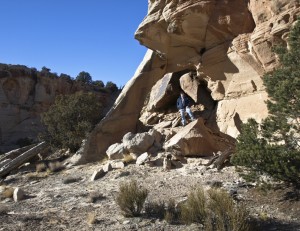 I scouted around the cliff bottom and found ATV tracks near a camp site. I also found a “Wide Gear” tent pole bundle that someone had dropped. Someone was going to be upset the next time they try to set up their tent because they were going to be missing a pole.

Back to terminus of the main road, we too another trail that headed south and south east to before dropping off into Box Flat. We had been down this road years ago on our way to Spring Canyon Arch but I didn’t remember the trail until we were bumping over the ribbed sandstone. If I remember correctly, traversing this trail in my original Ford Explorer took a long, long time. Dropping down onto Box Flat required building rock ramps and we spent some time taking pictures of an extra large spider that we disturbed. This time, the trail was just a bumpy but only took a few minutes on ATVs.

The main trail on Box Flat, heads south and enters a short break in the surrounding cliffs. However, now the road ends at a Wilderness Study Area which is heavily fenced to keep people from driving around the barriers. 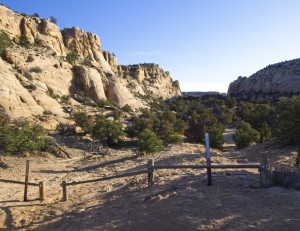 We had already been out there years ago so we weren’t too disappointed. Instead we took another trail heading west to yet another Wilderness Study Area sign. 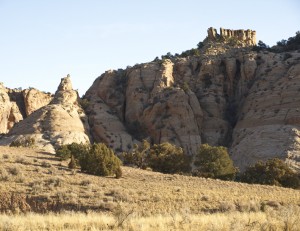 The road then turns north to make a complete loop. Here the cliffs were perfect for natural arches, yet we found none. 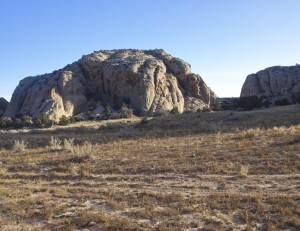 Since the shadows were growing long, we knew that the temperatures were going to be dropping quickly. We wisely decided to head back early. By the time we had trailered the ATVs again, we were frozen even though the sun was still up.

By the time we got back to Price Utah, we could see big storm clouds over the mountain that we had to drive over. Though there was a little snow on the road over Soldier Summit, we really didn’t have any problems until we got to Billie’s Mountain in Spanish Fork Canyon. Here the snow plows were busy trying to keep the snow from piling up too high. From there until the mouth of Spanish Fork Canyon, it was “white knuckle” driving with multiple vehicles crawling down the road behind us. Utah valley had only received a skiff of snow but by morning we had another four inches. (That was cutting it close.)

Winter has arrived and my ATV trips are probably suspended until warmer weather returns… in three or four months.