White Canyon is a large canyon complex that stretches clear to Lake Powell. There are three “crossings” along the way that allow vehicle traffic to the other side of White Canyon. We wanted to explore some of this area and were hoping that we could even drive some of the bottom of White Canyon itself.

We stopped first at the crossing called Duckett Crossing. After unloading the ATVs and driving under the highway into White Canyon, we found the canyon bottom closed to vehicles by the BLM Carsonite signs that we had grown to love. (That figures. After all, we don’t want ATVs messing up the sand and gravel in the canyon bottom.) 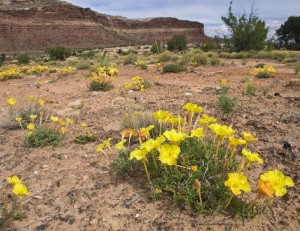 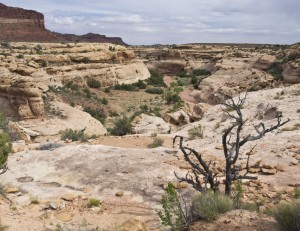 So we explored for a mile or two up Short Canyon and then Fortknocker Canyon but were disappointed that we could never get good views into the White Canyon or the side canyons which is the only place we expected to see natural arches or bridges. 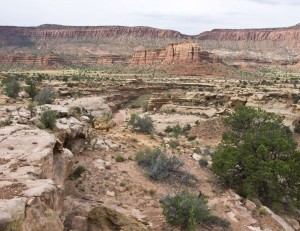 We did find a few class D windows that were rather odd. I believe I had seen pictures of them before but didn’t know where they were. 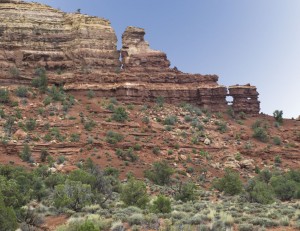 We loaded up the ATVs and moved down the road to the southeast to try the same thing at the Gravel Crossing. We had much the same results though we did find four old trucks and cars left over from mining days and we did get a good view of the area from the butte top near Jacob’s Chair. 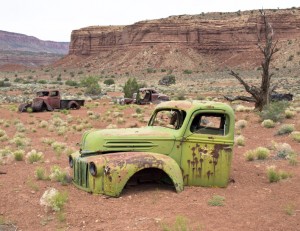 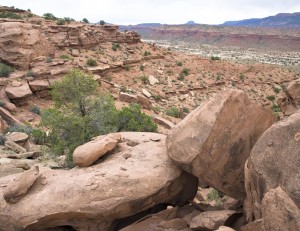 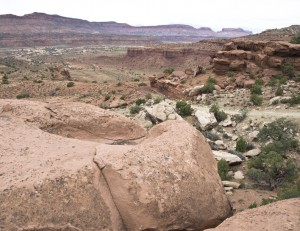 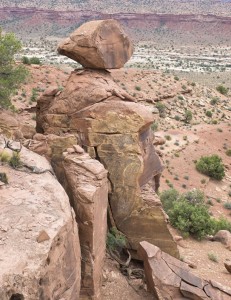 What we could see from the top of the butte was mostly rain clouds that were heading our way. We finally headed back to the Explorer to load up the ATVs on the trailer.

After loading up, we headed back to Blanding, bypassing Soldier Crossing which we had originally considered checking out too.

From Blanding we headed northward towards home stopping in Monticello and Moab to try to pick up ATV travel maps from the Forest Service and the BLM offices. (It’s not often that we are in town on a weekday when these offices were open.) However, either they didn’t have any maps, the maps they had were maps we already had or the “woman who sells the maps is out today and no one else can sell them”. We struck out with the maps everywhere we went. When you are dealing with government offices, that is to be expected.