Yellowcat and the Poison Strip

It was almost the end of June and Utah has been getting hit with day after day of rain. North of Utah County, the rains are at times heavy but down here it mostly dribbles and ruins outdoors plans. The nice part of this is that I haven’t had to do much yard work like mowing the lawn and watering the garden. The down side of this is that I get depressed after several days of no sunshine. Apparently I am solar powered.

Saturday, June 20th was the last day of Spring and rainy (of course) in Utah county. The weatherman promised better skies the further south you go so David and I loaded up the ATV’s and headed for Moab Utah. Apparently, Moab was not south far enough. It was cloudy and threatening rain.

We unloaded the ATV’s in the area near The Poison Strip, called Yellowcat, which is a site of old uranium mines and is northeast of Arches National Park. We drove the dirt roads south of Yellowcat until we were close enough to Cottonwood Canyon to enter the canyon above the cliffs. 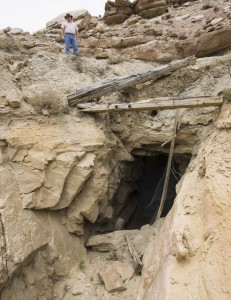 Along the way we found several places were graffiti from the 1930’s to 1945’s were etched on rocks. Since uranium mining didn’t start until about 1940, I wonder what the previous people were doing in this area. 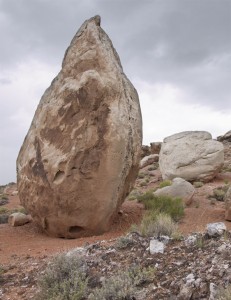 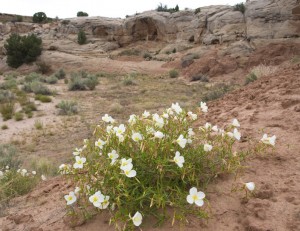 We then hiked down stream for several miles looking for natural arches and anything else of interest. About the time we hit the Arches National Park boundary, we were tired and ready to head back. We did find several small arches, one of which was just inside the park boundary. (This area of Arches National Park was added to the park a few years ago so I am not sure the natural arches and bridges have been documented in this area yet.) 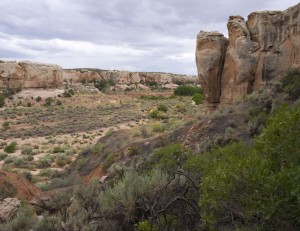 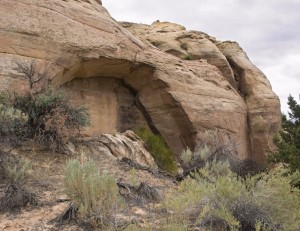 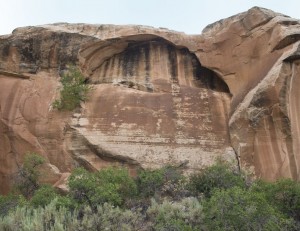 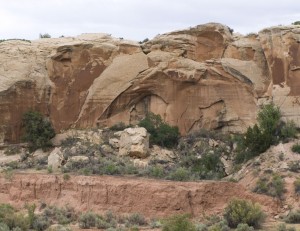 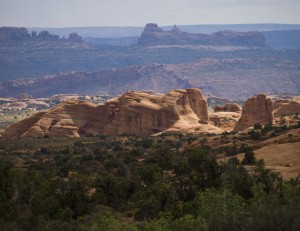 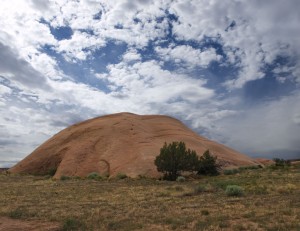 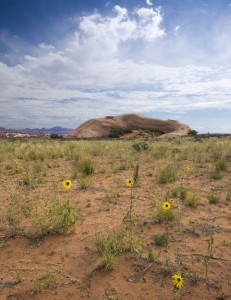 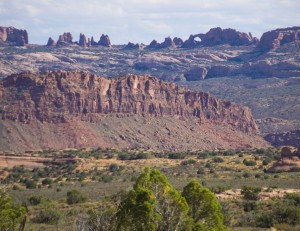 Back on the main dirt road heading west, we soon hit the end of the road at the top of a shear drop off into a huge bowl. From here we could even see Delicate Arch. 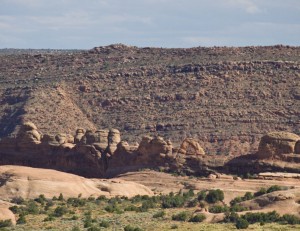 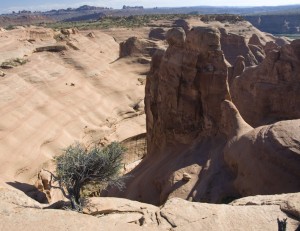 We began hiking the cliff edges northwest until we found Swankey Arch. From this viewpoint, we had a grand vista of Salt Wash and the many unnamed side canyons. This was my kind of country! 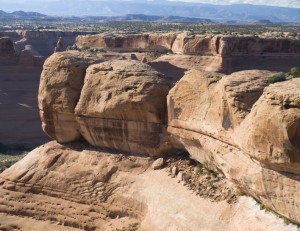 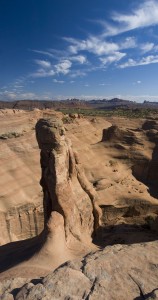 By the time we got back to the ATV’s the afternoon was becoming evening so we headed back to the Explorer again. Total mileage for the day: Hiking = 4.5 miles and ATV = 35.8 miles.

It was beginning to cloud up again and on the way back down I-70, we were treated to a lightning and thunder show.

At one point, lightning hit (like three times) an overpass up ahead of us. As the lightning ceased, it left a glowing spot that lasted probably three seconds or so. Cool!

After the lightning and thunder show, we got rained on fairly hard too but it disappeared before we even got to Green River Utah. When we got back to Utah County about midnight, it looked like it had been raining all afternoon.

(The lightning show reminded me of the “Ball Lightning” I had seen when living in Vernal about 23 years ago. A strong lightning strike hit a nearby hill which left a glowing ball. The “ball” was probably 4 or 5 foot around and proceeded to roll down the hill. When it hit a cedar tree, the tree burst into flames and the “ball” disappeared. The tree burned for less than a minute before the rain put out the flames.)