It was May 1st and another rainy cold day in Utah Valley. I couldn’t stand the thought of another ruined Saturday so I jumped in my Ford Explorer and headed south looking for sunshine. I had planned on heading south on I-15 to Nephi Utah but habit made me turn off in Spanish Fork and head for Price Utah instead. I was almost into Spanish Fork canyon before I realized what I had done. Oh well… Price would work just as well.

From Price, I could see sun to the south so I headed for Moab Utah with no real goal as to what to do when I got there. Once I hit Green River Utah, I did stop to take pictures in Elgin Utah, an area on the southeast side of Green River Utah. 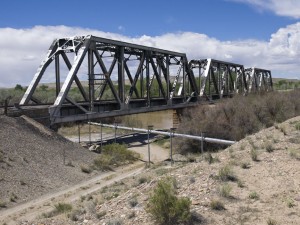 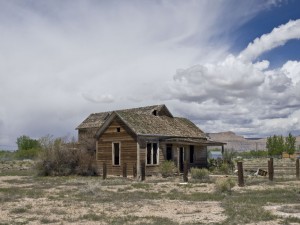 Five years ago, my son and I had explored Courthouse Wash near the Colorado River. With binoculars, we had viewed some Indian petroglphys high in the cliffs and I resolved to go back some day to see them. That seemed like an excellent use of a Saturday.

I parked in the Courthouse Wash parking area next to the highway and began my hike up the wash and into Arches National Park. About the time I reached the small waterfalls, it was time to leave the trail and start climbing the east talus slope to the foot of the shear cliffs. 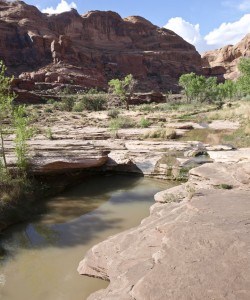 Here I found a few badly vandalized petroglyphs scattered along the east cliff walls. The most impressive panel was of several war shields that people had altered to look like bug heads. Sad. (I removed the bug alternations in the picture.) 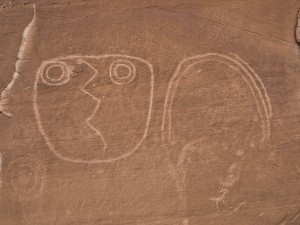 On this side of the cliffs, the area received more sunlight during the early spring so there were some early Hedge Hog cactus blooms to enjoy. 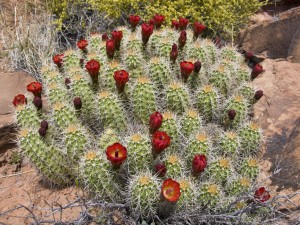 Since I was up that high, I followed the foot of the cliffs to the southeast until I was looking straight down onto the Colorado River near the Moab bridge. I wanted to take a panorama picture from this viewpoint but a passing rain cloud messed up the light. I laid down on a flat rock and took a nap until it passed. Then the wind about blew me off the cliff. A few minutes later it was calm again. 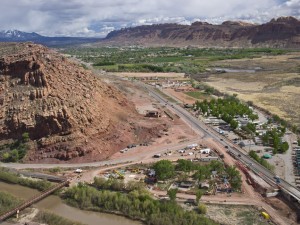 What a nice day! Some wildflowers were blooming… finally… and I was able to enjoy sunshine for a while.

Back at my vehicle, I took a side trip down to the Kews Lake area to take pictures of the faux waterfall. 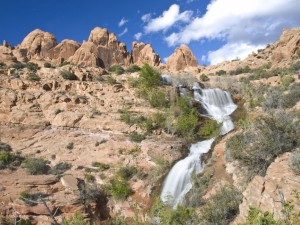 By then, I could tell that I was coming down with a serious cold so I headed for home again. (I then spent the next two days sick in bed. Nuts!)