Saturday was expected to be hot (85 to 95 degrees) but that was slightly cooler than a couple of weeks earlier. The day was also forecast for a chance of scattered showers and some clouds. With one of my ATVs still waiting for repair parts, that meant any exploring of southern Utah would be mostly from my Ford Explorer on the jeep trails.

Saturday morning, David and I headed for the center of the San Rafael Swell via Green River, Utah. We wanted to explore some country north of the I-70 freeway, east of the Buckhorn Wash road and southwest of Mexican Mountain. On the maps, this looked like fairly boring country but we wanted to see it for ourselves anyway.

By the time we left the main gravel road that joined the I-70 freeway with Buckhorn Draw and headed east through Rattlesnake Flats, the temperature was pleasantly hot. Every time we stopped to check out a vista, we were swarmed with no-see-ums so we hoped for a good wind for the day and we were not disappointed. 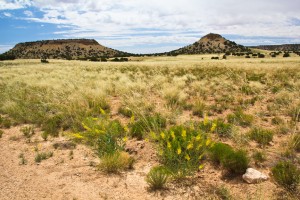 After an hour or two, we had bumped along the dirt roads, rarely needing four-wheel drive except for a few rocky shelves, until we hit the end of the road just 2.5 miles from Swazey’s Leap. We weren’t inclined to walk the two and half miles DOWN A CLOSED ROAD (grrrr….) , just to see the narrow gap over the San Rafael River gorge where the Swasey’s had built a stock bridge many years ago.

Instead we started exploring side jeep trails as we headed west, back towards the Buckhorn Draw road. 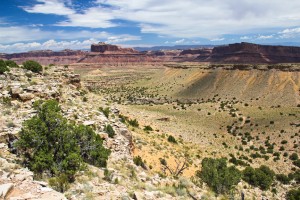 One of the side roads took us for a distance along the east side of Drowned Hole Wash. From the rim of this wash, we could see a couple of interesting natural arches across the canyon which we proceeded to hike to. Because of the cliffs near the bottom of the wash, we had to hike around the edge just under the rim of the cliffs that formed the top of the wash. By then, the temperature was about 95 degrees but with a slight wind and an occassional cloud, it was tolerable.

The first set of natural arches that we hiked and climbed up to, turned out to be three class “D” arches. The bottom two joined each other near the back and the third was directly above them. The rock in this wash reminded me of limestone that corroded easily in the weather. This left faciful melted rocks and holes including the three class “D” arches. 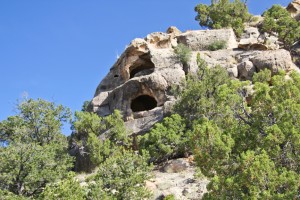 I wanted to call the class “D” arches “Triple D Arches” but David had a problem with that name. He seemed to think that people might spend a long time looking at our pictures and say things like “I don’t see it… do you see it?”

We also hiked up a saddle in the cliffs so that we could peer into the next arm of the wash to verify that a rock structure we saw from the distance was not another natural arch. It wasn’t. We then headed back to the vehicle mostly following the path that we had come in on. By the time we got back to the Explorer, we had only hiked 1.5 miles but that was more than enough hiking in that heat.

Storm clouds moved by to help cool things down but the “virga” rain never reached the ground before it evaporated again. Soon the sun was beating on us again. 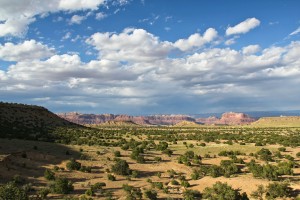 We checked out a few other side roads without seeing much else of any interest. 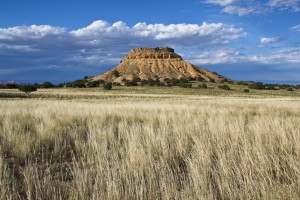 However, by the time we hit the Buckhorn Wash road again, the shadows were getting long and the buttes and mesas were becoming much more picturesque. We headed north towards the San Rafael River bridges and campground where we spent the “sweet light” time taking pictures until after sunset. 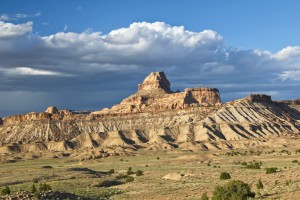 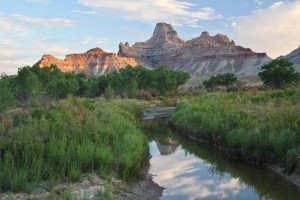 We then continued up Buckhorn Draw and headed for home again.

NOTE: While hiking the Drowned Hole Wash, I mentioned to David that I had now spent over forty years exploring the Utah deserts and canyons. (Not counting a couple of years walking the paths of England and Wales.) After forty years, you would of thought that I would have seen enough. Still, every trip is new and exciting. We never know what we are going to see just over the next hill.

I hope I have another forty years left in me because there is a heck of a lot of Utah that I am still anxious to see.

(Someone needs to invent a “walker” for old hikers.)