A Saturday finally rolled around where the weather looked almost Spring like… after a week of storms in the northern valleys. It was time to hook up the ATV trailer and head south.

Because of the unusual amount of snow that the San Rafael Swell had received, David and I headed for Moab Utah. Here we found the country mostly dry with only traces of snow on the north side of the cliffs. We bundled up in coats and gloves and spent the day enjoying the sunshine between clouds and bracing from the occasional cold winds.

We parked just north of Moab at a popular unloading and parking area for people who were heading up the Short Valley dugway which allowed access to the Crips Hole, Gemini Bridges and Bull Canyons area. Along the way we passed a number of jeepers, mountain bikers, motocross motorcyclist and even a few runners. This was obviously a popular place this weekend. 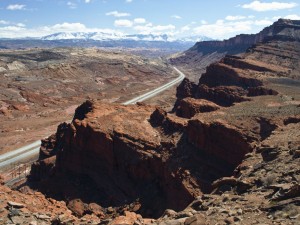 We drove the ATVs up the dugway and then south up Short Canyon, up another short but steep dugway on the road heading for the bottom of Gemini Bridges in Bull Canyon. Here we encountered a large number of runners that all had “Adventures Xtreme” team running outfits on.

Our first stop was at Bullday Bridge, a large class ‘A’ natural bridge located in Bull Canyon where it drops off the cliffs just around the bend from Day Canyon. Hence the name. 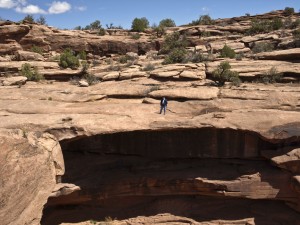 Just around the corner from Bullday Bridge is a jeep trail that we had always wanted to explore. Though we were originally heading for the bottom of Gemini Bridges in Bull Canyon, we never made it there. Instead we spent the day exploring the Dry Fork of Bull Canyon and taking pictures of the natural arches located there.

Near the bottom of the canyon we found Light Beam Arch. As we parked the ATVs on the jeep trail and walked over to the arch, we spooked a large mountain sheep ram with a nearly full curled set of horns. He was fast enough to avoid any attempt to take a picture. I need to be more ready for such things. 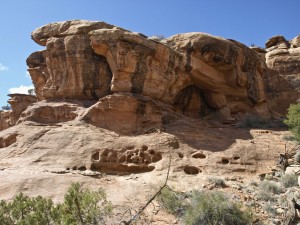 The next natural arch we found was Passageway Arch. 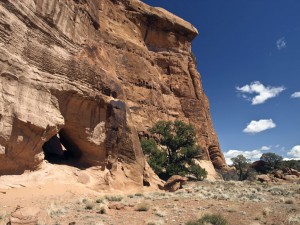 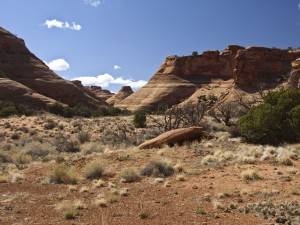 Further up the canyon we noticed an old cattle watering trough where ranches had tapped a water seep at the bottom of the cliffs. It looked completely dry now. 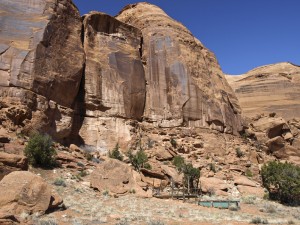 Soon we were at the end of the jeep trail. We parked and started hiking further up the canyon where we found Dog Leg Arch. 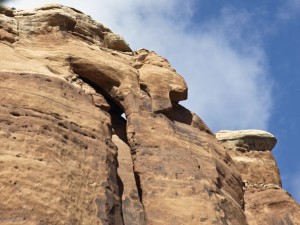 When the clouds caused the light to change on the cliffs behind us, we noticed that we had passed Doorway Arch. 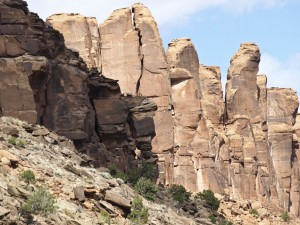 Along the way we found ourselves walking on a layer of clay rock that had formed interesting patterns as it eroded away. 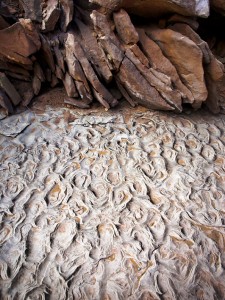 The last arch we found was a large class ‘B’ arch called Leg Bone Arch. This arch alone was worth the trip. Interesting. 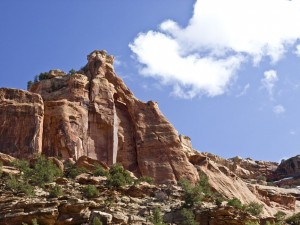 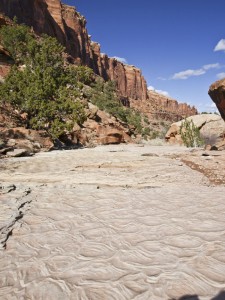 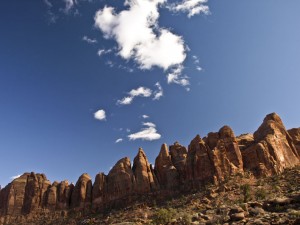 We spent some time laying on a flat rock enjoying the surroundings and the sunshine. When we finally hiked back to the ATVs and headed back down the canyon, we stopped to take pictures of several small class ‘D’ arches including Fragile Arch. 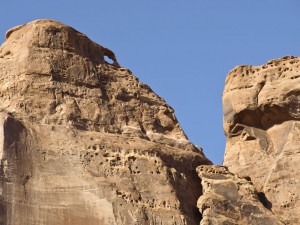 Once we existed the Dry Fork of Bull Canyon and hit the main road back to Short Canyon, David noticed a class ‘C’ arch just to the east of the road that we called Snag Arch. 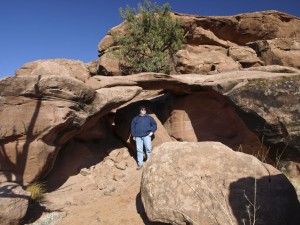 While we were stopped at Snag Arch, a motocross rider stopped to ask directions. He said that there was a jeep broken down in the main Bull Canyon and he wanted to make sure he had the right directions before heading for Moab to get help.

We knew it was going to get cold as soon as the sun disappeared so we headed back down Short Canyon and then the dugway to the parking area. A lot of jeepers and motocross bikers were doing the same thing so it was a bit dusty, especially when they passed us slower types.

It REALLY felt great to finally get out again. I’m looking forward to a long summer of ATV rides, hiking and seeing even more of Utah. I’m even looking forward to some Summer heat… though my body has forgotten what heat feels like.