First Day of Spring in Moab

After three months of cabin fever, it was time to venture out and see if we could find a warm spot in the frozen Siberian wasteland called Utah. We felt like bears awaking from hibernation, groggy and grumpy.

I picked up David Saturday morning in my Ford Explorer and headed for Moab Utah will a brief exploration of the hills southeast of Green River Utah. The only thing we found here of interest, was the abandoned buildings of the old Utah Missile Complex of the White Sands Missile Range. The clay hills here were extremely muddy so it was time to search further south. 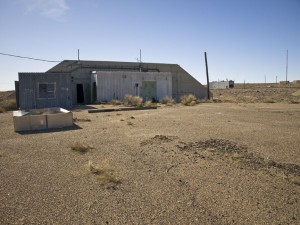 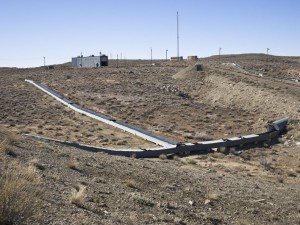 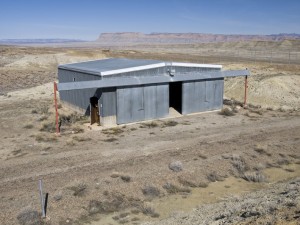 We visited Moab long enough for nourishment and to slalom through the runners of the annual Moab Half Marathon. I believe a motocross event was also taking place somewhere nearby. (Surely it would have been more entertaining to combine these two events.)

We parked at the top of Long Canyon and proceeded to hike the north rim looking for a natural arch called UT-191. We had been in this area looking for it before and were quite annoyed that we had never located it. This time we again failed to find it where we expected it. So we just kept hiking further east along the descending rim of the canyon. When we got to the last possible cove in the cliffs where any arch could hide, there is was. What an annoying arch to find! 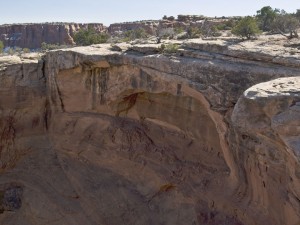 But even this Annoying Arch was quite a find. Not only was it a Class ‘B’ natural arch but it was also a double arch! 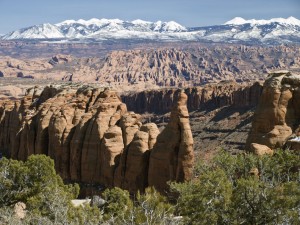 Since we had hiked that far, we decided to hike over the hill to the north and visit a short canyon that had a class ‘C’ arch and a class ‘C’ bridge in it. We had to hike further east along the north rim of that canyon until we could wiggle down a chute to gain the canyon floor. We then hiked up the canyon westward past Elevator Arch until we reached Keen Bridge. 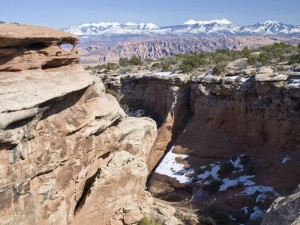 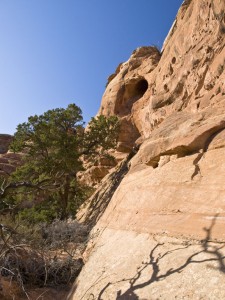 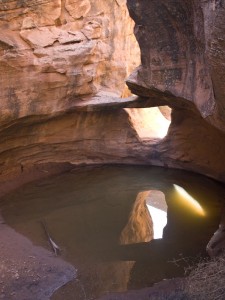 Because of the large water pool beneath Keen Arch, that was as far as we could go. When we last visited this area (back in film camera days), we were able to climb up through Keen Bridge where we discovered the canyon was immediately blocked by a dry fall.

We then headed back down the canyon to find a way up the canyon wall to the rim. We then hiked northwest to a jeep trail we knew about. This made it easier to walk back to the vehicle, at least part of the way.

On the way home, we stopped to take pictures of Merrimac and Monitor Buttes but the light really wasn’t right to warm up the sandstone cliffs as I was hoping it would be. Oh well. 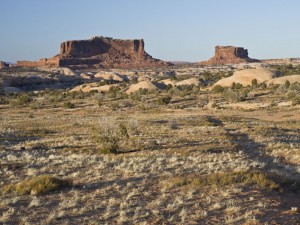 With temperatures in the low 60’s, it was a decent exploration day. While it was mostly dry in the Moab area, we could tell that the San Rafael Swell area still had a lot of snow. It is going to take another month for that area to dry out.

MAN, it felt GOOD to finally get out again!