Wednesday was my birthday and keeping with tradition (at least my tradition), I took the day off so I could spend the day hiking solo somewhere in southern or central Utah.

For the last couple of years, I have been using Google Earth on the internet to look for interesting areas of Utah to explore. One of the places that I had noticed on the Google Earth satellite photographs, was an area hidden in the hills south of Goblin Valley State Park, several miles outside of the park. The area looked like a valley of taller goblins, organized in almost a square shaped arrangement. This “Goblin Square” intrigued me to the point where I finally decided to visit the area. I figured that along the way, there would be plenty of photography opportunities even if Goblin Square turned out to be a bust.

That morning I drove down to Goblin Valley State Park near Hanksville. After paying the $7 entrance fee, I parked at the Goblin Valley overlook and pavilion. 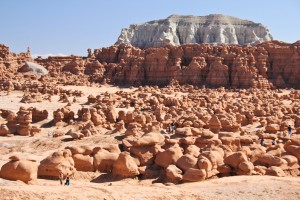 I then began hiking southward down the main drainage, which skirts the west side of Goblin Valley One, then Valley Two and finally Valley Three. I continued southward following the meandering wash called Red Canyon, that was usually dry. However, recent rains made the upper wash a bit muddy in spots. The further I hiked southward, the muddier it got until I had to stop occasionally to knock several pounds of mud off my boots so I could continue. Soon I was outside of Goblin Valley State Park and into the Curtis Formation hills. 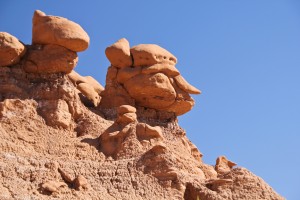 Occasionally I would take a detour up a side wash if I could see a colony of sandstone goblins nearby. 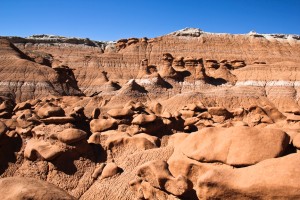 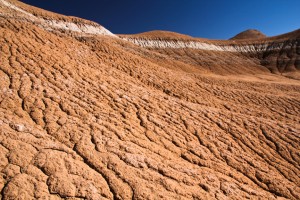 I had estimated the distance to Goblin Square to be about three miles from the Goblin Valley State Park parking area but with all the meandering and side trips, I probably stretched that distance to at least four miles. About the time that I had planned on climbing over the hills instead of following the wash, I found a side wash coming in from the east. Less than fifty feet up this wash I encountered a class ‘C’ natural arch which I called Red Canyon Arch. This was NOT an area that I thought I would find a natural arch! 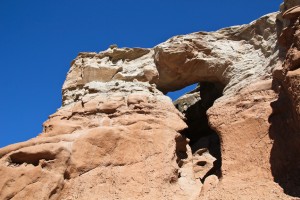 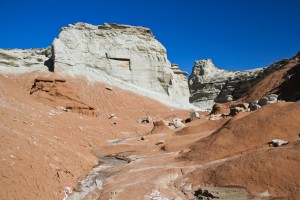 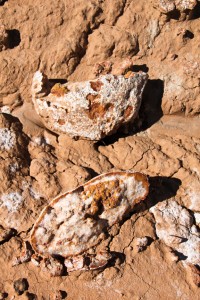 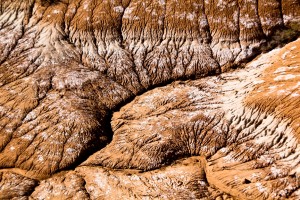 I then continued up this side wash until I could climb the hillside and walk across the top of the hills to a viewpoint overlooking Goblin Square.

WOW! This area was fantastic! 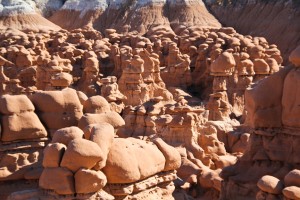 To enter the valley, I skirted along the top of the hill heading east until I could descend and enter the valley from the east side. I then spent the next couple of hours just wandering the many corridors and alleys, enjoying the fantastic shapes and forms created by decades of erosion in the Entrada sandstone. 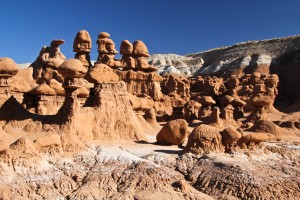 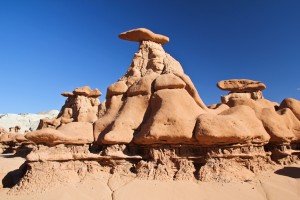 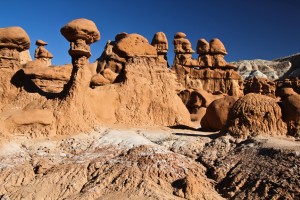 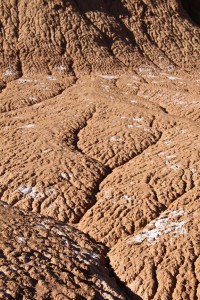 This is probably what Goblin Valley looked like before years of tourists tipped over the more delicate structures and pounded the dirt into concrete. 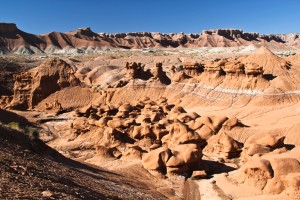 Once I finally headed back again, I left the wash about the time that I re-entered the park so that I could visit the third valley and then the second valley on the way. I found that third valley and  a good deal of second valley were just as fantastic and just as tall as Goblin Square. Since the light was running out, I decided that I needed to return at least one more time to further explore these two valleys. 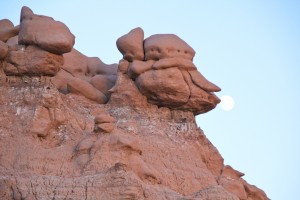 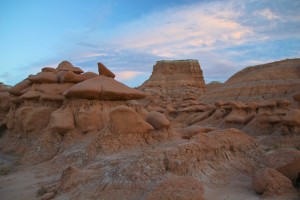 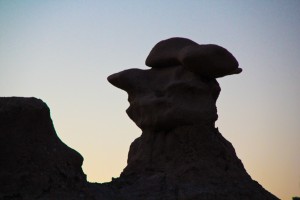 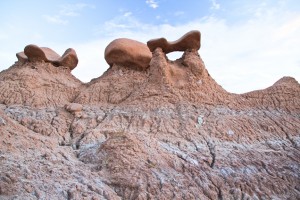 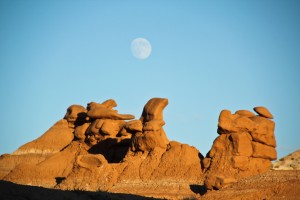 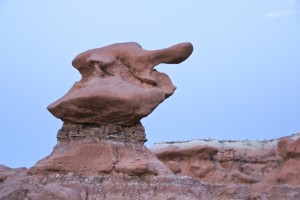 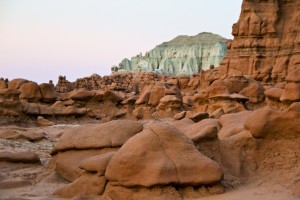 It was dark by the time I arrived back at the parking area. There were several photographers also loading up and I got to speak to one guy from Canada who was spending several months exploring throughout the western states just to take pictures. He had already been to several Utah parks and asked me if all of Utah was as “arid”. He thought that he had spent enough time in the desert and was anxious to head to California so he could drive the coast highway back to Canada. (“Arid”? Wait until he sees Nevada!)

Gee. I wonder how would it be to have that kind of time and funding?

I found myself rather sore (physically and emotionally) for the next couple of days at work… while sitting in front of a computer screen.