David and I had tried several times to take an ATV drive up Bull Canyon northwest of Moab Utah. However on our way there, we kept getting distracted by other areas we also wanted to explore.

Saturday we made a focused effort to explore Bull Canyon.

We parked at the bottom of the Little Canyon dug-way, unloaded the ATV’s and headed up the dug-way into Short Canyon. This is a popular access road so we were dodging a few groups of jeeps or motocross motorcycles. At least there weren’t any crowds of marathon runners this time.

From Little Canyon we continued southwest to the mouth of Bull Canyon and then into the canyon. Once in the canyon, we had to make occasional stops to take pictures of any natural arch we could see including Sunlight Arch, a small class ‘D’ cliff side arch hanging on a north cliff wall. 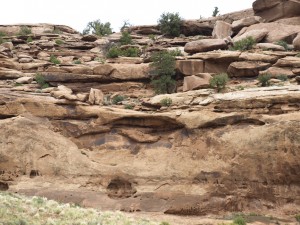 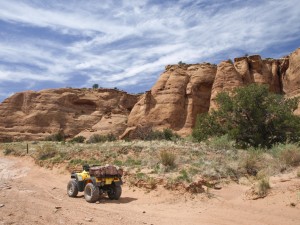 Further up the canyon, we stopped so we could hike the short trail (less than 1/2 mile) to the bottom of Gemini Double Bridges. The last time I was here must have been about ten years ago and the jeep trail took you to the end of the side canyon and the bottom of Gemini Double Bridges. Now you hike the distance… on the jeep trail. 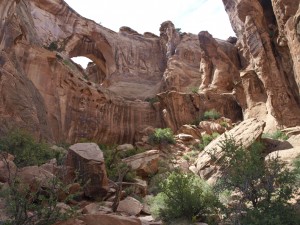 Back at the ATV’s, we continued up Bull Canyon to the end of the road near some uranium audits. From here we could view Steer Arch and Skyward Arch. 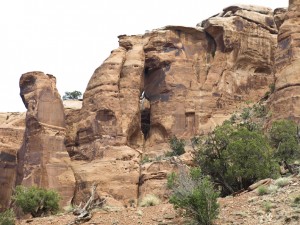 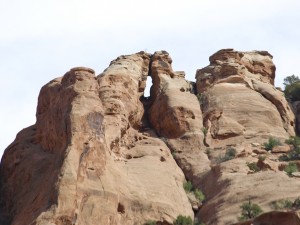 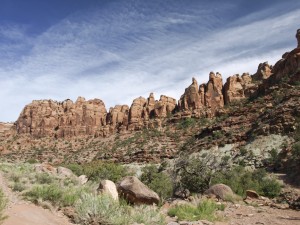 Here we stopped to chat with a couple from Nebraska driving a highly modified VW dune buggy. Apparently, they don’t have recreational opportunities or landscape like this in Nebraska. That is truly a sad thing!

From the end of the road we hiked up the canyon so we could get a good look at Dark Shadow Arch, which turned out to be a nice class ‘B’ free standing arch. 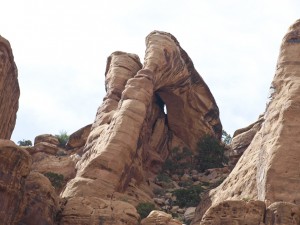 Along the way, I took time to take a few pictures of wildflowers including Bridge’s Penstemons. 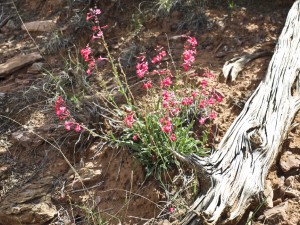 As the afternoon shadows became longer, we made our way back down the canyon and took some time back at the area where Bull Canyon drops into Day canyon. 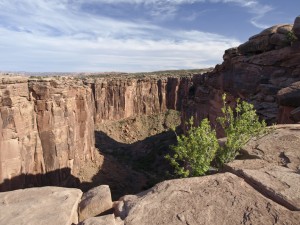 We then spent some time exploring jeep trails to the east.

Here I noticed the Wild Rhubarb were blooming. 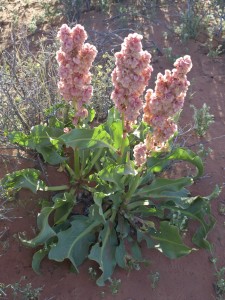 However, the country wasn’t nearly as interesting here so we headed for home again.

I usually depend on a caffeinated soda to keep me awake for the long drive home. However after reading about the health problems caused by “High Fructose Corn Syrup”, I worried that falling asleep at the wheel was going to be a problem. I was delighted to find “Mountain Dew Throwback” at the local convenience store, which was made with real sugar instead of the HFCS chemical sweetener.

Hey, it tastes better than the regular Mountain Dew!