Somehow, the calendar is reporting that it is the middle of August which means summer is quickly burning to an end. How is this possible — so soon?!

It is plain to see that my ratio of mind-numbing 8 to 5 “work” versus “fun” time is seriously whacked. 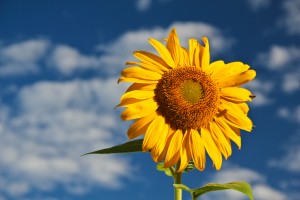 Somehow, I managed to hold on until the weekend again.

What we didn’t know is that this trail was now know as “Metal Masher” by the 4X4 jeepers. While most of the trail from the parking area was good dirt road, it was the last mile of trail along the cliffs that gives the trail its ominous name. And an appropriate name it is!

Along the way, we stopped to hike down upper Little Canyon to Griffin Arch, a large class “D” natural arch. 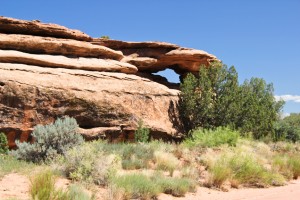 We also explored a little of the rim of upper Little Canyon, just after the first dry fall.

The temperature was in the low 90’s with no clouds but we took it fairly easy. Still, by the time we got back to the ATV’s after hiking about 1.5 miles, we were done with hiking for the day.

Well, OK. We did hike a short distance to get better pictures of Trail Arch (another class “D” natural arch) but that doesn’t count.

Soon after Trail Arch, we were into the part of the trail that gives “Metal Masher” its name. I would rate this trail “Extreme” for ATV’s though we only had to stop once to rebuild the trail over a drop off. Between “challenging” climbs up steep sandstone shelves, there was also quite a bit of bouncing through scree fields of sharp rocks about the size of bowling balls. For someone who prefers using ATVs for transportation to a destination rather than thrill rides, these obstacles were mostly just annoying. 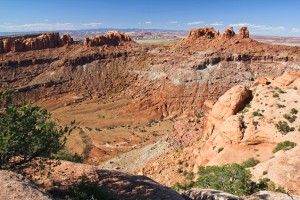 As the trail skirts along the rim of the cliffs, we could see my Explorer only about 3/4 of a mile away and below us. Unfortunately, that short distance also meant at least another hour ride just to get there.

By the time we finally reached the furthest and highest point, we were sun blasted and beat up from the ride. The shadows were beginning to grow long so we knew we didn’t have a lot of time. 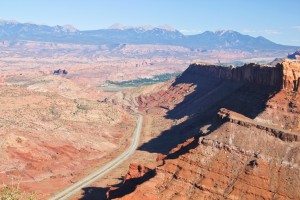 We climbed around in the cliffs until we found a way that should get us down to the level of Lyn-Lin Arch but we didn’t feel like we had the time nor the strength to attempt it. It looks like climbing up from the bottom requires about the same amount of effort so we decided to head back down the trail instead. 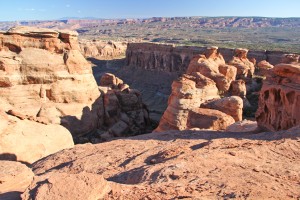 Unlike 4X4 vehicles, going down a rough trail is easier that going up when you are on ATVs. Soon we were back on good dirt roads again and flying back down Little Canyon, down the rocky dugway and back at the Explorer before dark.