In spite of a “chance” of rain in the weather forecast, David and I hooked up the ATV trailer to my Ford Explorer and headed for Moab Utah anyway. After all, it was Saturday and a day decompressing on the ATVs was more important than a little rain.

Just before entering the town of Moab, we took the Potash Road which winds along the north side of the Colorado River as it heads west and then southwest. Along the river there are a few camping areas which seemed to be most flooded out from recent rains. Only a few campsites were occupied. The parking area we were heading for is right next to the road and we were surprised to find only one other vehicle in the parking area.

We unloaded the ATVs and headed up the rough trail know as the Poison Spider trail, which we hoped would take us to Little Arch, located high above the Colorado River near “The Portal” just outside of Moab Utah.

The Poison Spider trail is mostly decent sand or rocky trail with half a dozen problem spots where you are required to navigate up impossible sandstone rocks and crevices with names like “The Waterfall” and “The Wedgie”. Really ugly stuff. For ATVs, I would call it an Average difficult trail with spots of Extreme thrown in.

However, the view from on top was great!

On the way up, we stopped to hike up a short canyon to Long Bow Arch, a large class “A” natural Arch hidden in the sandstone fins. 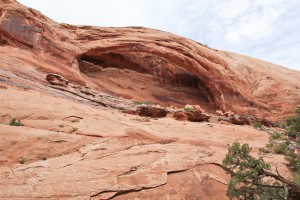 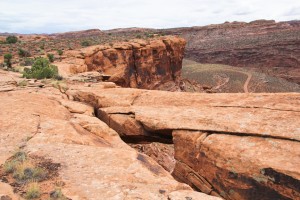 Instead of the usual Utah summer “Monsoon” seasonal thunderstorms that pop up from heat thermals hitting moisture layers, the rain we were dodging was a true storm front which blanketed the entire sky with gray clouds. We knew we were going to get hit before the day was over and we were just hoping that rain on the slickrock sandstone didn’t make it even slicker. However, the cloud cover was making the general temperatures quick agreeable. (It was a cool August day in Moab, which is as likely as saying it was a cold day in Hell.)

Along the way, we only saw one other vehicle, a UTV carrying a husband/wife/big dogs combo.They probably owned the other vehicle in the unloading area. They stopped to report that the trail in was also the trail out. (Dang it!) They were on their way out to avoid the approaching rain. (Double Dang!) 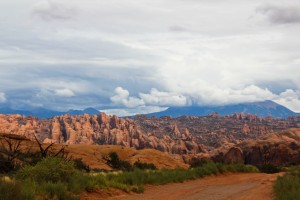 Somehow, we managed to make it clear to Little Arch (which is actually a big class “B” natural arch) before the rain drizzle started. 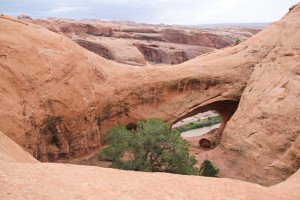 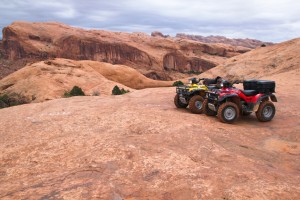 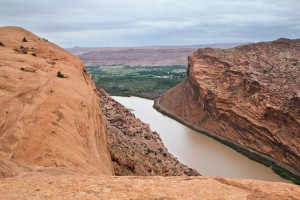 After a few quick pictures, we headed back and experienced rain drizzle most of the way back. This was not quite enough to actually get you wet but it could still sting the face when you were blasting down the sandy road. 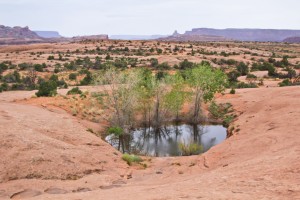 On the way back, we took a trail that took us to the grave site of a young girl who died of a poison spider bite, probably while camping with her parents back in the 1890’s. And that is how Poison Spider Mesa got its name. 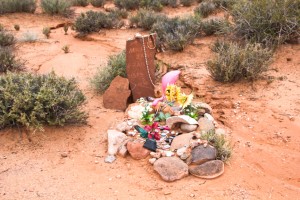 Back on level ground with the Explorer, we loaded up between bouts of rain drizzle and headed for home again.

An excellent and cool day exploring more of Utah back country.