The weekend was again forecast to be mostly rain and storm. However, David and I decided that if we took another Friday off from work, we might be able to slip in a full day on the ATVs before the main part of the storm covered all of Utah… again.

Thursday afternoon, I received my new camera. I had ordered a Canon Rebel t2i 18 mega-pixel system but they were so popular, it had been back ordered for the last couple of months. I had the Sigma 28-200 mm lens, lens filters and 16 gig memory card all ready to go and now the camera had finally arrived. Perfect timing! (The poor little sucker doesn’t know what it is in for.)

Friday morning we headed for Hanksville Utah. Several miles south of Hanksville, we took a east gravel road and parked near a dry stock reservoir called Lone Cedar Reservoir.The Henry Mountains and Bull Mountain lay to the west on the other side of the highway. 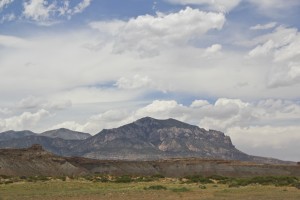 Among the sagebrush, the Indio Bushes were brilliant in their purple blooms. 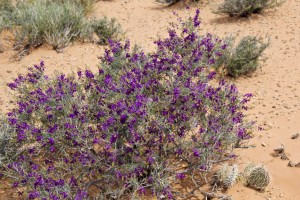 After unloading the ATVs, we headed east for 4.3 miles to an area where the road bends to the south to avoid the head of  Arsenic Wash. With our binoculars, from this viewpoint, we could see Arsenic Arch across the canyon less than a mile to the northeast. 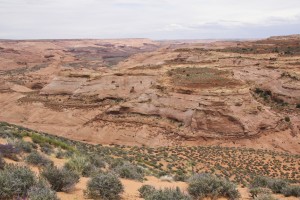 We then drove around the head of the canyon and parked next to the gravel road at a point we estimated to be the closest to the arch. We began hiking through the sand hills heading north until we were above Arsenic Arch.

Along the way we found Dwarf Lupines blooming in the sand dunes. 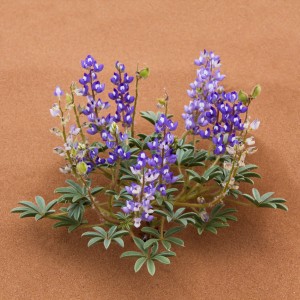 As well as Pincushion Buckwheat. 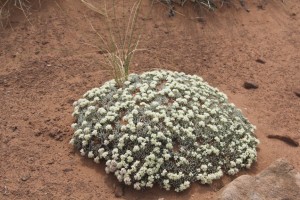 Because of the steep slickrock sandstone, it was necessary to follow the rock cairns left by previous arch hunters, to make our way down a tricky path that probably represented the only access to the arch from the top. Previous arch hunters also proved to be excellent rock artist, constructing a life sized fallen warrior using lose rocks. 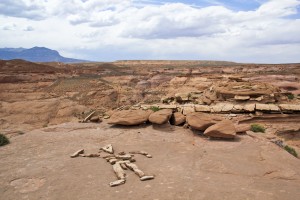 Arsenic Arch was interesting free-standing class ‘C’ arch, because of its prominent location on the side of the slickrock slopes. 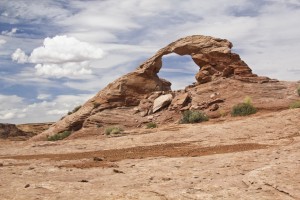 We were also interested in the vast canyon complex that opened below us to the north and northeast. Arsenic Wash drains into Poison Springs Canyon which is obviously much larger than we expected.

Once back on the ATVs, we headed back towards the Explorer again so we could take another road to connect us to the Poison Springs Canyon road just to the north of us. However, as we approached the turn, it became apparent that we were about to get rained on. The storm cell was small enough that we could see lighter skies on the other side but the main part of the rain was heading right for us. We decided to scurry on back to the Explorer and wait for it to pass while eating a Subway sandwich lunch. On the trip back, we did get hit with some cold rain and even a little hail. Ouch!

As soon as the rain, lightning, hail and sandwich were gone, we again took off on the ATVs and headed for the west end entrance to the head of Poison Springs Canyon. The road was nicely wetted from the storm but it wasn’t muddy until we got down deep in the narrow canyon. Here a small stream of rain water was flowing down the canyon and we were a little nervous about what might be forming in the side canyons we passed. We tried to keep an eye on the approaching clouds but the deeper we drove into the canyon, the harder that became. Several places in the upper canyon, a small stream of water bubbled to the surface but then soon disappeared in the sand again. 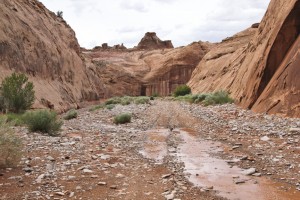 While still in the upper parts of the canyon, we found Poison Springs Canyon Arch at the top of the cliffs on the north side of the canyon. This was an unusual looking class ‘D’ arch. 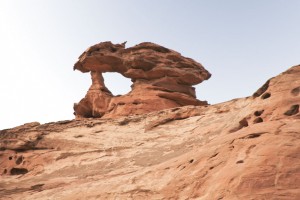 Poison Springs Canyon is a wonderful canyon to explore! There was something new around every bend with plenty of side canyons that begged to be explored. The canyon cut through a number of rock formation levels so the strata was continually transforming the “feel” of the canyon. 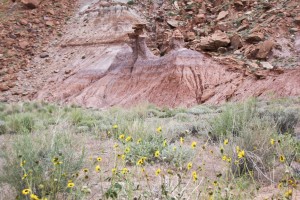 Many miles later, the canyon widened out. Here the road was better and we were able to make better time. We wanted to at least make it to the Muddy Devil River but there was too much to see along the way. 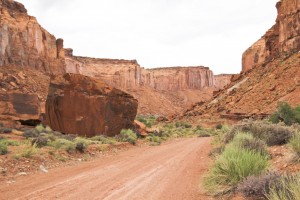 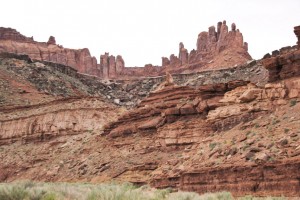 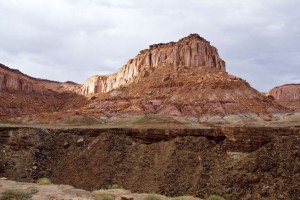 Just before we hit the Muddy River, the road left the sandy wash bottom and headed up a steep dugway, over the hill and down the other side to the River. Where the road left the wash, there was a metal rod barrier across the wash to keep vehicles from continuing straight down the wash. Other than the fact that it was necessary to direct the road to a good river crossing area, I wonder what was further down the wash that they didn’t want you to drive to. 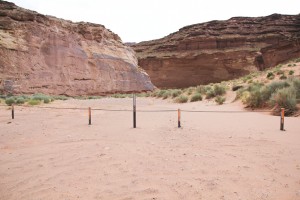 It was about 7 PM by the time we hit the Muddy Devil River which was running too high for ATVs to cross anyway. 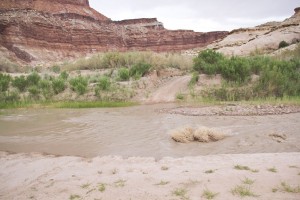 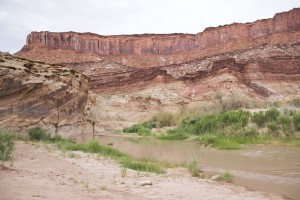 The clouds were beginning to gather again so we made a run for the top of the canyon.

We only made one stop at a point in a canyon bend would have made a perfect Indian camp. The area was back away from the drainage, high enough to not flood, against the cliffs and mostly hidden from by rocks and trees. If the ancient Indians ever visited this canyon, I was sure we would find petroglyphs here even though we hadn’t seen any Indian sign or ruins anywhere else in the canyon. (Like we had much time to really look well.) Sure enough, there were petroglyphs including a small glyph of warriors fighting, created in the Archaic Indian style which indicated an age of between 1500 and 3000 years ago. The other petroglyphs were more of the Barrier Canyon style which would be less than 2000 years old. Nice! 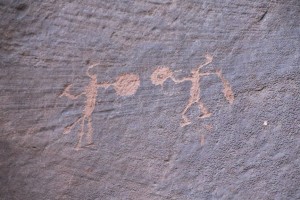 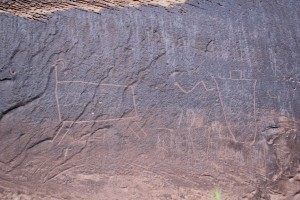 It was dark by the time we climbed out of the canyon and made our way back to the Explorer.

It was hard to tell if the sun had gone down all the way or whether it was the dark clouds causing the gloom. Either way, we headed back to Hanksville Utah for a hamburger and then home again. The rain pestered us on and off for the whole home bound trip. It then rained for the next two days.

(Note: While I was enjoying myself in southern Utah, the water hose on my home air conditioner broke, pouring water down the foundation of my house until it leaked into the laundry room and soaking the carpets in the nearby rooms. So now you know what I worked on all weekend while it rained.)