The last of December and the first of January were unusually cold in Utah (and for a good deal of North America and Europe, for that matter). With all of the holidays finally over, David and I choose a sunny Saturday to take a drive southward, just to check out conditions. The southern end of the state had received several early snow storms and we verified that there was still more snow in the central part of the state than we had in Utah County.

We drove down through Beaver, Panquitch, Topic, Cannonville and Henrieville. Because it was a sunny day, I had then fulfilled two of my immediate needs — the need to get out and the need to enjoy some sunshine. However, the snow depth prevented us from trying several possible short hikes. 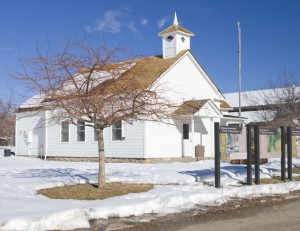 (Note: Several weeks after we visited Henriville, heavy snow caused the collapse of the Henriville Fire Department building, destroying the fire truck and another vehicle.) 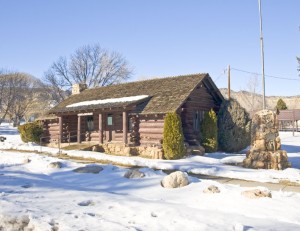 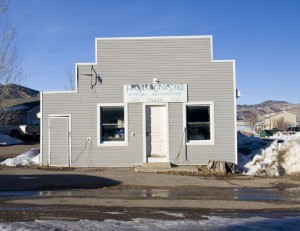 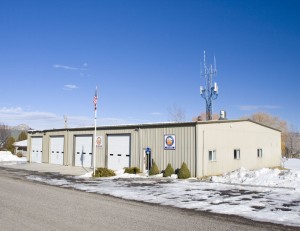 While exploring the back streets in Tropic Utah, we found that the road heading west up a canyon called Bryce Canyon, was open to winter traffic. The road ends at a trailhead where the trail heads west into Bryce Canyon National Park. Because there had been some foot traffic on the trail, we decided to try it ourselves. For the most part, we could walk on top of the crusted snow. However, occasionally you would step wrong and break through the crust which caused you to stumble and sink nearly to your knee. There were also parts of the trail where the crust would not hold our weight anyway. After about a half mile of this stumbling along, we gave up. Here we met a couple who lived in Tropic that were also trying the hike and had also turned around. 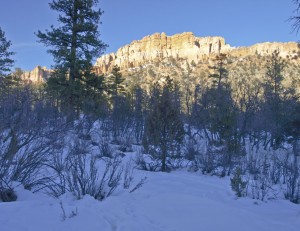 Walking down the trail was actually more difficult because we would break through the crust more often. David even tried just powering through the snow by running. His resulting “face plant” amused me greatly. He was glad the snow wasn’t too hard.

Because of the short winter days, that was about all that we had time for. We headed home early and had to be content to have just enjoyed the drive and a short hike. However, it wasn’t that pleasant of a drive home.

We were on the I-15 Interstate freeway heading north near Holden Utah when a car in front of us blew a rear right tire. The car immediately began erratically veering across all lanes with smoke, pieces of tire and sparks flying everywhere. At least twice the car was sliding sideways and I was just waiting for it to start rolling. Myself and another driver in a vehicle to the side of me, were doing our best to stop and stay out of the way of the pending wreck. While the car nearly hit another vehicle that was slightly ahead of it, somehow the driver managed to correct the slides and bring it to a safe stop on the right side of the freeway. I pulled up behind them with my flasher lights going and watched six rather excited Snow College students rapidly exit the sedan. After stumbling around in the snow for a minute or so to make sure they really were alive, most of them fired up cigarettes and stood around shivering (probably from the cold). One of them managed to dig out another tire and the necessary jack items while boasting about his driving skills. (I think the car lost control because it was over loaded with people.) Finally they had a good tire on the car and set out on their drive again. We followed them until it was apparent that the car was indeed going to be able to drive down the road correctly. I then carefully passed them and put some distance between us.

I don’t know who was most grateful that there had been no wreck — the witnesses, who almost spent the evening picking up pieces of college students, or the overly-nicotined college students that now needed an underwear change.