With snow on the blooming hyacinths in my front yard, my wife and I decided to seek the sun in the southern end of Utah. I took Friday off from work so we could drive down on Thursday evening. We made it as far as Cedar City Utah were we grabbed a motel room for the night.

The next morning we drove to Zion National Park just outside of Springdale Utah. The idea was to visit Zions on a weekday and avoid any weekend crowd.

When we arrived, vehicles were lined up waiting to get into the park and a sign proclaimed that there were no more parking spots within the park. Some school districts were have their Spring Break and there were families with screaming kids everywhere.

A parking spot opened up in a parking lot just outside the park so we took it. We then walked down the hill and across the Virgin River bridge to the pedestrian entrance to the park.

The entrance fee to the park was now $20 per vehicle for a day pass. We purchased a National Park Pass for $80 which is good for a year. (Ouch!)

We then joined the ‘unwashed masses’ in boarding one of the many double bus plus trailer units that ferry tourists around the park. They come by every fifteen minutes and stop in all the popular places. (In other words, not in the places I wanted to see.)

We took the bus to the far end of the road, to the Temple of Sinawava area and disembarked. We then walked along the river while I looked for pictures. Us and about a hundred other people.

Dang, we were tourists!

The waterfalls were not running and the trees at this end of the valley had not yet started to turn green. It was ugly. I didn’t take a single picture and the crowds were making me crazy. I had to leave!

We got back on the bus and made one more stop at the Court of the Patriarchs to at least take a couple of pictures.

That turned out to be a mistake because we almost couldn’t get on the crowded buses after that. We ended up standing all the way back to the Visitor’s Center. 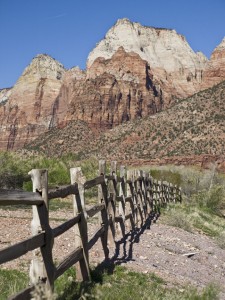 After lunch at the SolFood Market, we drove (our own car) back into the park and drove up through the tunnel to the east side of the park. 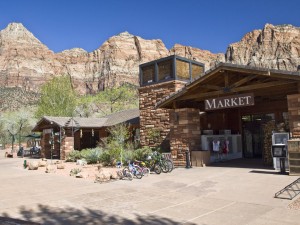 The crowds weren’t quite as bad here.

I then parked along side the road and hiked up the wash to Two Pines Arch, a class ‘C’ natural arch that I had only taken pictures of from a distance.

On the way up the wash, there were lots of fresh footprints. Just before I started climbing the last hillside to the arch, I ran into a couple from Bishop California who were on their way back down the wash, having visited a nearby peak to the north.

At the arch, one of the pine trees that gave the arch its name, had died and blown over. However, another pine was growing nearby so the name is still valid. 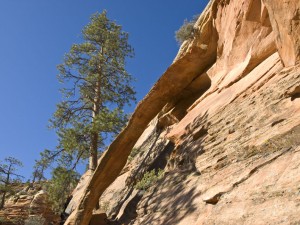 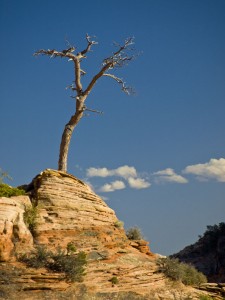 On my way down the hill and back into the wash, six teenage guys passed by, also heading back down the wash. This area is downright crowded!

I stopped once more to take pictures before we left the park. This time at the Virgin River road bridge to take sunset pictures. 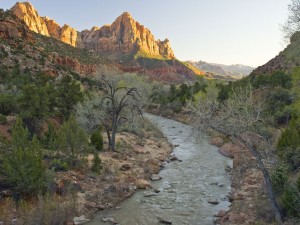 We then left the park and headed east, stopping only briefly in Virgin Utah for a few pictures as the sun disappeared in the west. 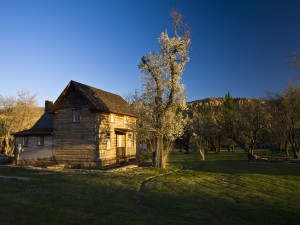 We then drove to Hurricane Utah where they had their entire main street ripped up. We got the last room in the motel in town after we discovered the motels just outside of town were WAY too expensive.

The trip to Zions National Park had left me in a bad mood. But at least were enjoying the warmth of 70 degree temperatures.

The next morning we drove into St. George Utah so Nancy could visit a quilting store. 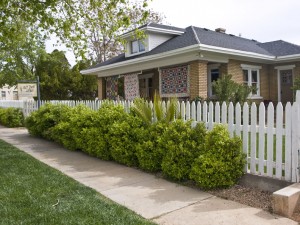 That gave me a chance to walk around St. George a little. 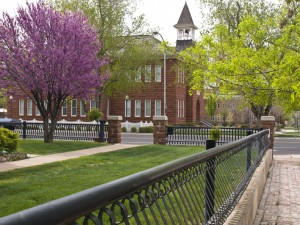 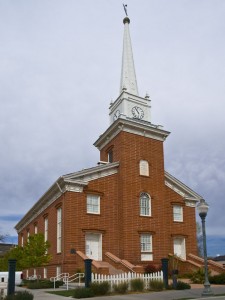 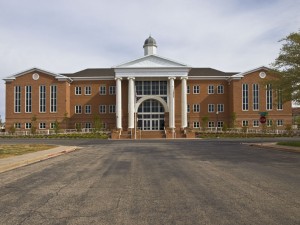 We then headed southeast on I-15 through Arizona’s Virgin River Gorge. As the river exits the west side and the Arizona/Nevada desert open up, we existed at Littlefield/Beaver Dam Arizona. 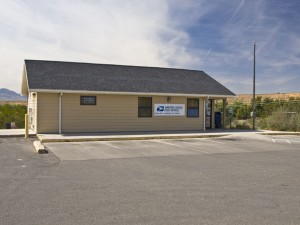 We then found a county road that took us northwest and west into the Joshua tree and cactus desert. 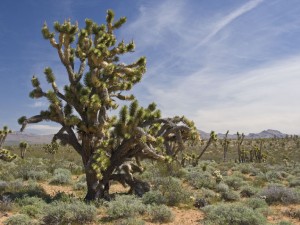 There were even a few desert wildflowers blooming like the California Chicory flower. 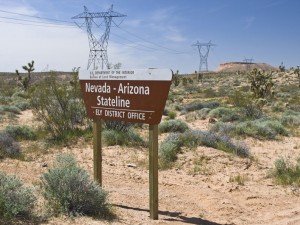 After bumping along for about 24 miles (I really wished that I had my ATV!) the dirt jeep trail allowed us to travel east where we found the boundary marker for the Utah/Arizona/Nevada corner. 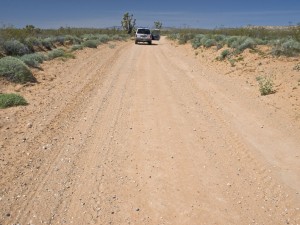 This was a very obscure place to travel to. I doubt that I could of found it without a detailed examination of Google Earth before we left. 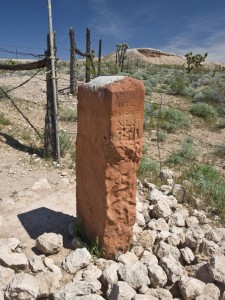 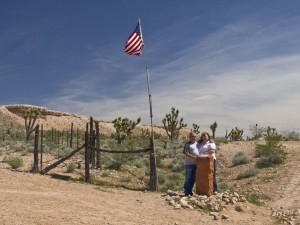 On the way back, six ATVs passed us, including one that was being towed. That was not a good area to break down in.

By the way, while in Nevada, the temperature hit 83 degrees! It felt GREAT!

At that point, we had to head home again to fulfil some Sunday obligations that we had.

Oh well. It was nice to spend some time together and get out of town for a while.