Boundaries of Snow and Arches

Saturday was the last day of April. I woke up to find four inches of new snow. 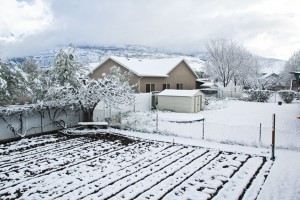 Since the chance of performing any yard work was pretty much nil, I now had an excuse for picking up brother David and heading south. This snow storm just swiped through the northern end of the state and by the time we arrived in Price, the sky was mostly sunny and warm enough to enjoy. By the time we hit Arches National Park near Moab, it was even warmer with mostly sunny skies. 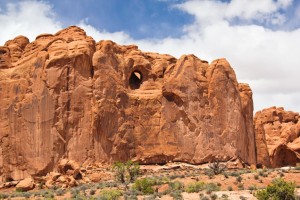 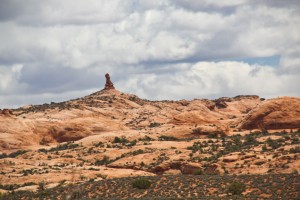 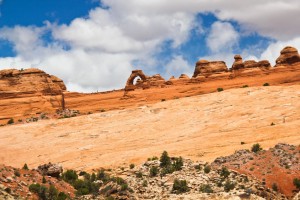 After a short hike up a short canyon to the north of the road, we located the class ‘B’ natural arch called East Boundary Arch which is located just outside the park boundary. 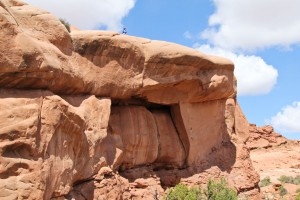 We then continued to the top of the canyon where we could look into Winter Camp Wash and west to Delicate Arch on the horizon. This was a rather unique view of Delicate Arch though Frame Arch was more visible. 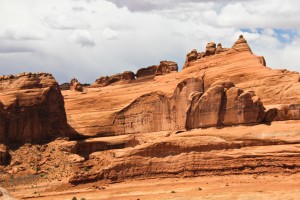 I spent some time climbing around in the cliffs above East Boundary Arch before we headed back to the vehicle. 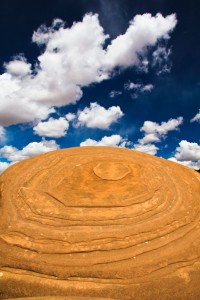 As we were having a snack back at the Explorer, a park ranger pickup with a young lady ranger drove by.  (Back in “my day”, park rangers were either grizzled and gray men or pony-tailed grad student guys who wore sandals.)

We then took a drive down the Klondike Bluffs jeep trail so we could visit Whale Arch and Leaping Arch which are both class ‘B’ arches. 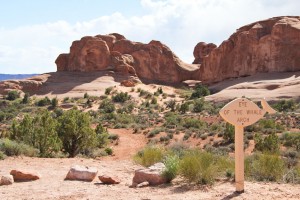 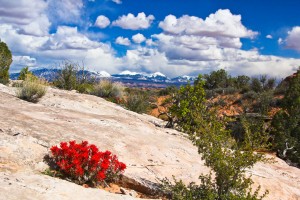 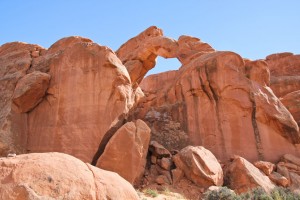 We then back tracked a ways so we could drive the Willow Springs dirt road west for a ways. Here we stopped to explore the rocks on the north side of the road to locate Slanted Eye Arch, Concealed Bridge and Dam Arch (all class ‘D’ natural arches). Here the sun was mostly hidden by clouds and a cold wind was blowing. Not so nice after the sun and warmth earlier in the day. 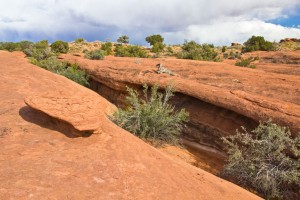 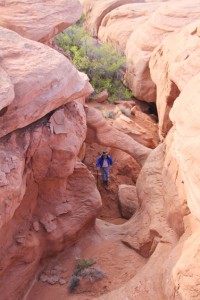 On our way back to the Explorer, we found the young lady ranger waiting for us. This time she stopped to talk to us and make sure we weren’t doing something illegal. When she found out that we were “Arch Hunters”, I believe she became a little friendlier. She even suggested some areas to explore.

The afternoon was getting late but we continued west to Willow Springs so we could check for a small class “D” bridge located near the confluence of two small canyons and not far from the cabin. We finally found where the bridge used to be but it had collapsed some time in the past. We will have to add that bridge to the list of dearly departed collapsed arches/bridges. 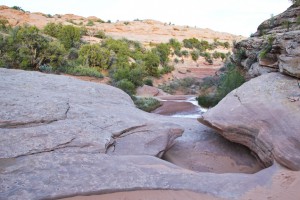 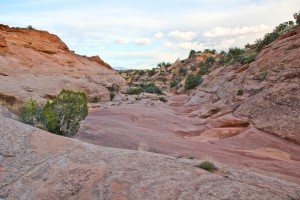 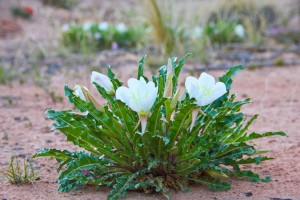 To leave the park, we continued west on the Willow Springs road and were glad to hit paved road about sundown. Several hours later, we were home again and glad to see the snow had melted.

To leave the park, we continued west on the Willow Springs road and were glad to finally hit the smooth and paved highway.

[Note: Someone asked me if I still left a penny stuck in the rocks under the natural arches that I visit. Answer: Wouldn’t that be littering?]