Another beautiful Saturday was forecast so David and I headed back to the Hanksville area to attempt a hike down into Pasture Canyon. We were going to try to hike down a steep area that we had read about from some “canyoneering” climbers who had climbed out using this route.

To get back to Pasture Canyon, we choose to try east on the Horseshoe Canyon dirt/gravel road and then south on a dirt road between the Jeffery Well and Little Flat top. This road took us south through miles of sagebrush flats and five gates. 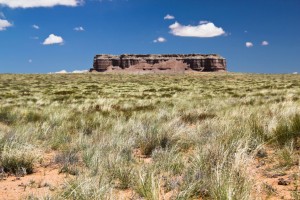 Finally we were on the road paralleling the top of Pasture Canyon so we stopped to take a few pictures. 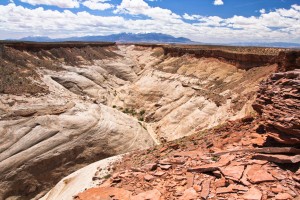 Our next stop was the west side of Pasture Canyon where the hiking route begins near the junction of the west and east fork canyon split. It was easy enough to pick a way down the first 500 vertical feet on sand and then steep sandstone canyon face but just when we were ready to drop down the last 60 feet to the canyon floor, we were stopped by the cliffs.

After searching the area, we were able to locate a number of Moqui steps carved into a cliff side. These hand holds were probably just enough for skinny ancient Indians (or young canyoneers) to scramble precariously up this area of the cliffs but this was no option for two old dudes attempting to get down. There wasn’t even a place to tie off a rope if we wanted to attempt that method. 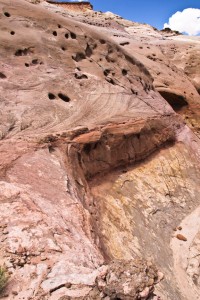 Instead, we began our climb back to the top. As we neared the rim, I noticed four distant hikers at the bottom of the east fork of Pasture Canyon. These hikers had obviously been canyoneering down (rope rappelling) the east fork and were now going to exit the canyon.We watched as they ascended an area of the east canyon. Using binoculars, we were able to see that they were using Moqui steps that were also carved into that side of the canyon and we could tell that old dudes were probably not going to be able to use that route either.

Once we were back on top, we began exploring the canyon rim to the south for another way down. 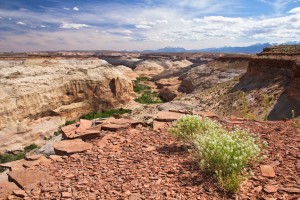 We found one at Pasture Canyon Point, the same place we had explored on our previous windy visit to Pasture Canyon. This was about a half mile short of the mouth of Pasture Canyon and it was marked with a old, crumbled rock cairn. The fact that local wildlife was also using this route, gave us confidence that we would be able to safely access the canyon floor. 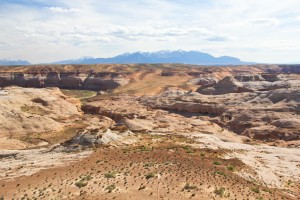 We would have to return another day and give the new route a try.

We took another road out so that we wouldn’t have to open and close five gates. This road allowed us to hit the Horseshoe Canyon road at the Texas Hill ranch. We then stopped at Little Flat Top for dinner before heading for home. 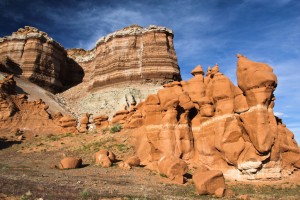 This is wonderful time of year to be exploring southern Utah canyons.

It was a great day… again!