It looks like March has rolled in like a lamb with mild weather. This is suppose to mean that it will roar out like a lion. We will see if that works this year.

Here in Utah Valley, all but the largest parking lot snow piles have melted. The last storm just dropped a little rain and about half the days are somewhat sunny. It’s jacket weather now and we are all pretending that warm weather is just around the corner. I’m not going to put the snow blower away yet. I’ve lived in Utah long enough to know there will be move snow shoveling to do.

David and I spent our first March Saturday hiking north of Moab. We wanted to visit a number of natural arches located in Cache Valley. The area we were heading for was just outside of Arches National Park but we had to go through the park to get there. On the way through, we stopped to take pictures of a couple of minor class ‘D’ arches called Porthole Cave Arch and Split Bottom Arch. 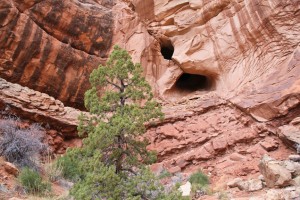 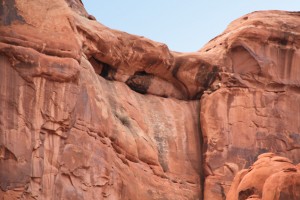 Cache Valley is east and slightly south of Delicate Arch, just outside of Arches National Park. The jeep trail begins from the Delicate Arch view point parking lot and heads east up the valley. We spent the day climbing around the cliffs on the north side of the valley, looking for a number of natural arches that we knew were there. Temperatures were in the low 50’s but unfortunately, most of the day was hazy overcast. Still it promised to be a GREAT day to be out and hiking again!

From the Cache Valley jeep trail, we hiked north 3/4 mile through the blue foothills and climbed a natural ramp to the first natural arch which could be easily seen in the cliffs from the vehicle. This arch was called Jaggered Arch and was a large Class ‘C’ size arch. 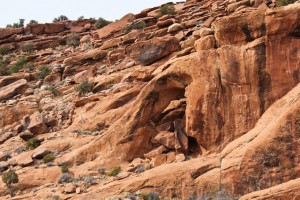 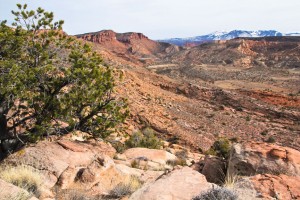 After some climbing, we could then hike east on a natural shelf that occasionally let us top out on top of Dome Plateau. At one point we dropped down into a gully so we could visit Overlooked Arch, a large class ‘D’ natural arch. 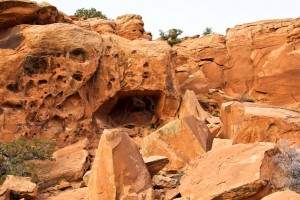 Just around the corner was Reclusive Arch, a large class ‘C’ arch. If I could have backed up the hill far enough, I could have take one picture of both arches at the same time. 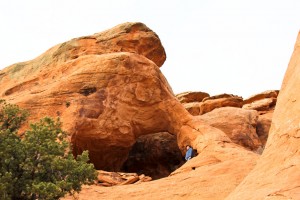 By staying on that same level, we were able to exit the gully and continue eastward on a different, lower shelf. We didn’t have to go far to find a class ‘C’ triple arch called Bonus Triple Arch and several smaller class ‘D’ arches called Extra Arch, UT-45 and UT-44. 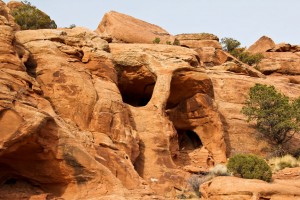 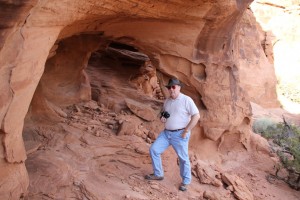 Note: As we were visiting these arches, I thought that it was interesting that there were no signs or even old footprints to be seen, even though I suspected that other Arch Hunters had probably visited these arches within the last five years. This is a testimony to the resilience of this country.

We then decided that we needed to be down one shelf to visit the next arches. To drop down, we had to follow the cliff edges back to the west until a way down could be found. Once on the next shelf lower, it didn’t take us long to find a small class ‘D’ cliff handle arch called Little Pinyon Arch and a large class ‘C’ arch called Cache Arch. While we expected to be looking up for Cache Arch, we were actually on top of it. 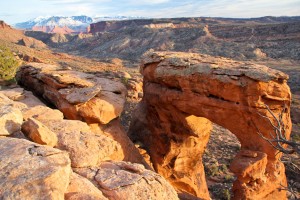 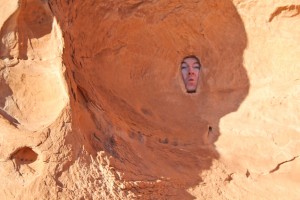 By now, the sun was quickly slipping into the horizon and we weren’t ready to leave yet. 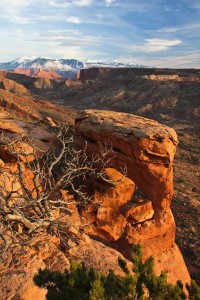 Hiking to the west again, we finally found a way down to the base of the cliffs where we hurried back to the east and found the class ‘C’ arch called NABS Arch. This arch was named for and by members of the Natural Arch and Bridge Society (NABS), a world-wide natural arch and bridge hunting group. We couldn’t leave until we had visited this arch. 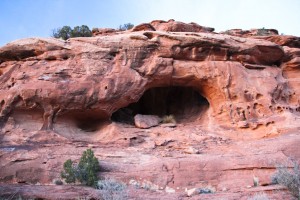 Now we had to do some serious marching southward to get back to the vehicle before it disappeared in the night.

A quarter of a mile to the south, we hit shear cliffs over a hundred feet high. I was afraid we might since there wasn’t much in the way of animal trails in that area.

We then proceeded to edge westward trying to avoid deep gullies while at the same time, trying to ring the hills and loose as much altitude as possible. Finally we had to bring out the flashlights which meant we could only plan our next ten steps with no idea what was ahead of us. By then it was a clear star filled night but no moon to aid us. We could just make out the cliff ridge to the south and we knew the jeep trail was between us and that ridge. So we just stumbled southward as best we could.

When we found ourselves on blue hills, I knew we were out of the cliffs but there was a lot of gullies and broken country between us and the road. Here there were occasional game trails to follow which we knew would not lead us to a dead end of any kind. While stumbling down a sandy wash, I found a large piece of glass. I knew the jeep trail was nearby and it didn’t take long to locate it.

The tracks in the jeep trail were fresh but I couldn’t tell if they were our tracks or belonged to someone that had driven by while we were hiking. (I had recently installed new rear tires on my Ford Explorer and I didn’t recognize the tread.) We decided to try hiking east on the jeep trail and I was about to announce that we had chosen the wrong direction when we found a skinny section of the trail where I had to carefully navigate between boulders. We then knew we were heading the correct direction and it wasn’t long before we were enjoying the beautiful night sky while standing next to my vehicle.

Whew! It could of been a long night stumbling around in the dark. Instead, it was the end to a GREAT day of hiking!