Straight Wash and Arsons Wash in the San Rafael Swell

Between snow storms, the weather is finally getting warmer. In Utah Valley, the trees are either in bloom or at least beginning to green up again as leaves bud out. It was time to uncover the ATVs and head south.

Saturday promised temperatures in the high 60’s or low 70’s in the San Rafael Swell so that is where we headed. Just after noon, we were unloading the ATVs and began exploring the jeep trails along the southeast edge of the San Rafael Swell, between Three Finger Canyon and Ernie Canyon.

Just to the south of Three Finger Canyon is a short canyon where Arsons Wash cuts through the San Rafael Swell rim. We found a jeep trail that took us to the mouth of the canyon which is where we started hiking. Since the canyon is fairly short, this didn’t take long. 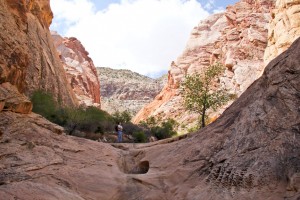 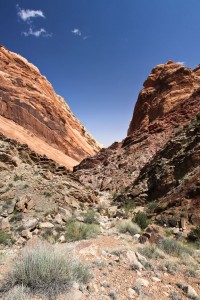 Back on the ATVs, we worked our way further south and ended up following “Designated Trail” carsonite signs that on a road that didn’t see much use. Especially ATV use. The further we went, the worse the jeep trail became.

We found that the trail didn’t have a road that would take us to the mouth of Greasewood Draw canyon. Getting to the mouth of  Greasewood Wash canyon would require several miles of sagebrush flats hiking so that meant coming back another day if we wanted to explore that canyon.

In the canyon we found just one lone Indian petroglyph and several rock structures that were almost natural arches. 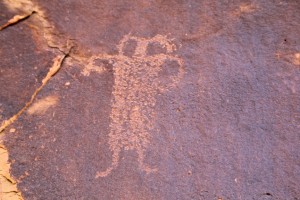 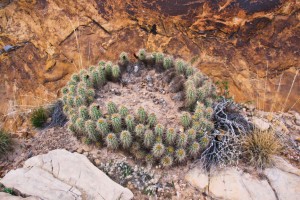 If we had more time and energy, we could continued hiking west and then southwest to Eardley Canyon. Instead we headed back and loaded the ATVs just about sunset. 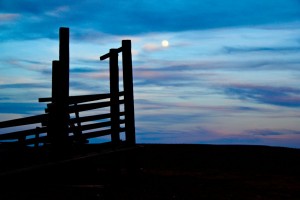 That made for a nice “opening”  day in the hills to prepare us for another year of exploring southern Utah.

It’s going to be a GREAT year!