For our anniversary every year, my wife and I head south trying to find warmth and sunny skies. We usually fail. This winter it really wasn’t as crucial past years. Utah Valley didn’t even have a major snow fall until the middle of February and it quickly melted. We enjoyed a very mild and warm winter. Still we needed to get out and away for a few days.

I was also hoping that I would get a chance to fly my drone in new locations. Unfortunately, every day was windy except our first day out.

We drove down to Blanding Utah and spent the night. After breakfast we drove to Bluff where I did get a chance to fly my drone for a while. 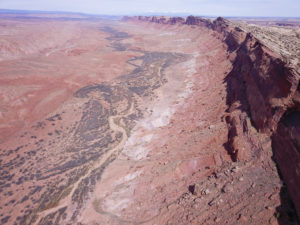 Our next stop way was where Highway 163 cuts through Comb Reef. (I’m going to plan on returning here later in the Spring to fly further up and down the reef.)

We then took a quick dive into the Valley of the Gods so I could fly yet again.

Before stopping in Mexican Hat for lunch, I got a chance to also fly around the Mexican Hat rock feature.

We then drove  down to Goulding, Utah near the Monument Valley Tribal Park. By then the wind was howling so there was no way I was going to get my drone in the air.

We drove south into Arizona and then east into New Mexico. We were going to stop for the night in Shiprock but we could not find a single motel. We ended up driving north to Farmington, New Mexico to spend the night.

The next day we drove to Bloomfield, New Mexico so we could drive south and visit the Angel Peak badlands. Windy and cold. 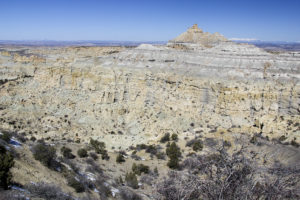 We then drove north to Aztec, New Mexico to see the Aztec Ruins National Monument. Wow! This was worth the whole trip! While I had visited and stumble upon a number of ancient Indian ruins of the same age, this was the first time I had seen a “Great House” ruins. Very impressive! 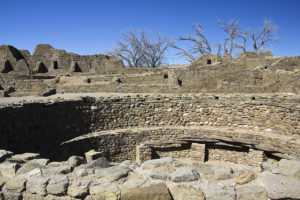 Image an ancient Pueblo people building a 500+ room structure, sometimes three stories high, with the back wall lined up perfectly with the summer solstice sun path and a great kiva that would practically enclose my home. Stone and timber had to hauled from miles away by perhaps a thousand workers. And they did not live there! It was ceremonial only.

I was blown away!

From Aztec, we drove back to Shiprock. I really wanted a good picture of the Shiprock rock formation. Since the sun was beginning to set, we tried driving around to the south and west for the best picture. 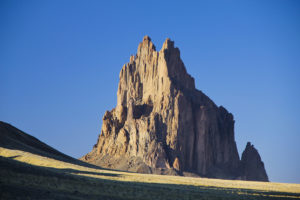 That is how we ended up in Red Valley, New Mexico. We then had to drive over the mountain to the west to get to Lukachukia, Arizona where we could hit the road heading back to Utah.

We had bumped around long enough so we were heading home after another night in Blanding.

On our way through Moab on Saturday, we decided we had some time so we took a quick drive through Arches National Park. 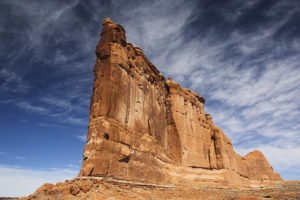 We managed to get home Saturday afternoon, just before a big storm moved in on Sunday. I’m not sure how many hundreds of miles we traveled but I think we got traveling out of our systems for a while. It was good to be home, even if it was only a few days away.