Friday morning, September 15th, David and I took the day off from our respective jobs so we could load up my Ford Explorer again and head south for a day exploring new areas of southern Utah. This time we headed for the far southern end of Canyonlands National Park also called The Needles.

From the highway between Moab Utah and Monticello Utah, we turned west on the access road to The Needles but left the road just after passing the Dugout Ranch and headed south on the North Cottonwood Creek dirt road. After the road tops out on Salt Creek Mesa, it bends westward and soon passes on the north side of Cathedral Butte. We planned on camping near Cathedral Butte that night but wanted to do some exploring further west in the Beef Basin area, while there was still some sunlight. Unfortunately the Beef Basin area turned out to be much larger and much more interesting than we had time for. We visited a small natural arch and some Indian ruins before deciding we needed to return another time and spend some serious time exploring the entire region. 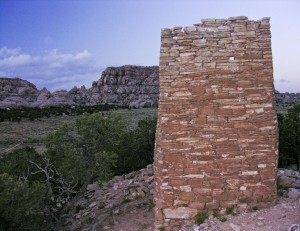 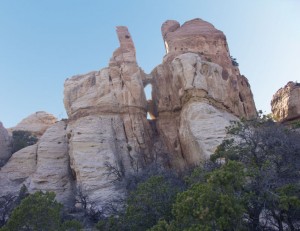 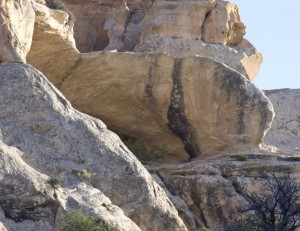 Back at Cathedral Butte, the wind was blowing fairly hard so we located a campsite off the road in the cedars that provided fairly good protection for the tent. For about half the night, the wind would slack off until almost calm before building back up to a roar, only to slack off again. This means that you were almost asleep when the wind roar and tent flapping would wake you up again. Then you would almost drift off to sleep again before it woke you up again. This was the “Lake Powell” winds that we had experienced before. It certainly doesn’t make for a very restful sleep.

The next morning, all was calm again. We fired up my propane stove for a hot eggs-n-toast breakfast before breaking camp. We drove back to the northwest side of Cathedral Butte and parked at the Salt Creek trailhead.

We then headed down the trail which began by dropping off the steep edge and dropping about 500 feet. (We knew this part of the trail was going to kill us on the way back.) After a short lateral hike along a rim, the trail descends again down a rocky wash leaving you another 600 feet lower. However, once you are on the canyon floor of the East Fork of Salt Creek, it is mostly flat walking with only slight elevation gain or loss.

For the first couple of miles, the canyon is dry and passes under Wedding Ring Arch, which cannot be seen from the canyon floor. Here we noticed a class ‘D’ arch we called Chin Arch. 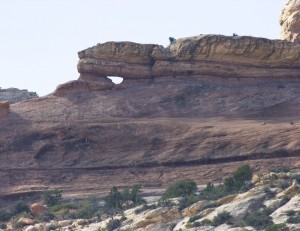 Then the trail passes through a swamp and a small creek develops. Almost five miles down the trail is the Kirk log cabin and Kirk Arch in the cliffs to the north. In the distance, we can see Ring Arch on the cliff side. Suddenly I REALLY wished that we weren’t just day hiking. The area was just getting interesting and I wanted to explore every canyon and see every turn. 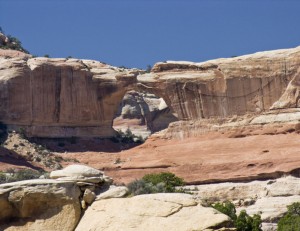 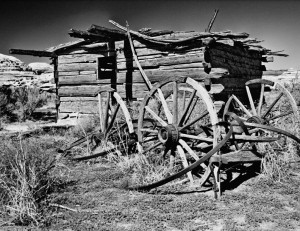 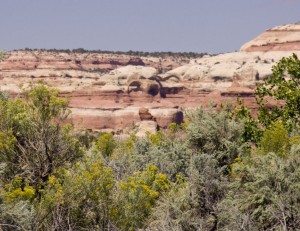 What a wondrous place to be!

After delaying the inevitable for as long as possible, we took our last pictures and headed back up the trail again. By taking a different trail through the swampy area, we found another small calss ‘D’ arch (Salt Creek Trail Arch) and some Indian handprints on the cliffs. Salt Creek was an important ancient Indian location with a year around water source and cliffs to build fortifications in. 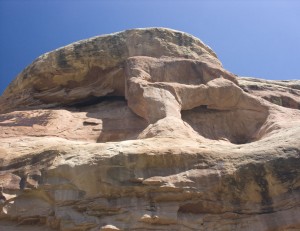 The hike out wasn’t real fun but about the time we topped the first rocky wash drop off, we were joined by another hiker, Larry Beck, who had been exploring the middle cliff area between the trailhead and Wedding Ring Arch. He joined us for the rest of the hike and his conversation helped make the climb more bearable. Still, we were exhausted by the time we reached the parking area on top again.

It was then time to head home… mainly because staying longer would have been of no value to us in the exhausted condition we were in. (It takes me three or four days back at work to begin to recover from our weekend trips.)