So what if it was triple digit temperatures, I wanted to go Arch Hunting!

So Saturday found David and I bumping along dirt roads northwest of Moab in my Ford Explorer. (Yes, we did run the air conditioner — right up to the moment we pulled off the paved highway.)

Eight miles northwest of Moab Utah is the turn off for the Little Canyon dug way heading southwest from the highway. We drove up the dug way and then south up Little Canyon until the road climbs out of the canyon and heads southwest towards Gemini Bridges. Shortly after climbing out of Little Canyon, the road forks with the right fork heading for Gemini Bridges. We took the left fork which heads south towards the Bull Canyons on what is called Trigger Road. We drove down Trigger Road for .9 miles and parked. We then hiked .2 miles east down the drainage until we found an arch we had learned was hiding in this broken and chaotic country. We had heard that it was a natural arch but discovered that it actually was a class ‘B’ natural bridge. We called it Trigger Road Bridge. 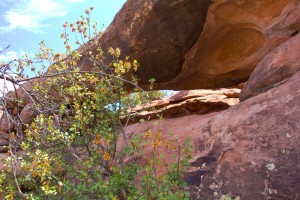 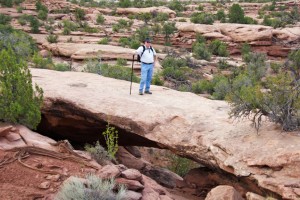 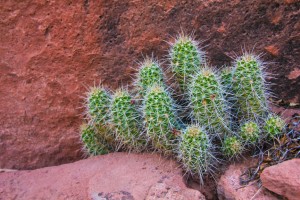 Back in the Explorer, we backtracked to the Gemini Bridges road and headed west all the way to the 313 highway to Dead Horse Point State Park and Island-In-The-Sky area of Canyonlands National Park. By taking the highway 1.2 miles north, we could hit the Horsethief dirt road heading west. We drove down the Horsethief road for 1.7 miles before taking a jeep trail heading north. We should of taken the jeep trail at the 3.0 mile mark instead. This caused is to bump around rough connecting trails to end up on the right jeep trail which took us 1.7 miles north of the Horsethief road and .3 miles west of the upper Hellroaring Canyon. Even in the heat, (now overcast skys) we were able to walk the short distance to the rim of Hellroaring Canyon and find Hellroaring Bridge along the rim. 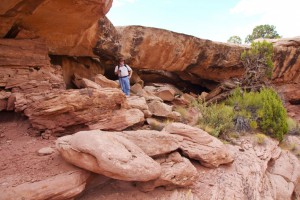 However, Hellroaring Bridge turned out to be a class ‘C’ natural arch and not a natural bridge. Go figure.

Below us was the class ‘B’ Hellroaring Window Arch in a thin sandstone fin. 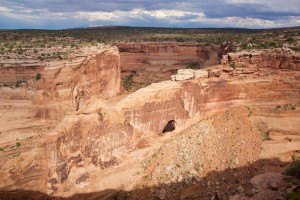 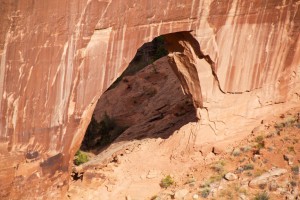 Near our parking spot, there were a number of potholes weathered into the slick rock sandstone. It was interesting to see several hole at the top of a small sandstone knoll. Almost volcano like. 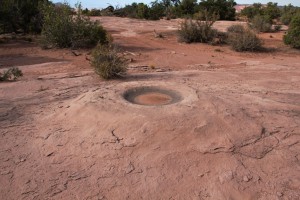 David mentioned that Hellroaring Arch was now his 791st documented Utah natural arch/bridge on his website. (http://www.UtahArches.com) I have visited a “few” more than that but since my arch collection is only documented on Google Earth, we rely on his website for keeping track of where we have been.

Hmmm…. We need nine more NEW natural arches to visit. I guess that means a trip into southern Canyonlands National Park again. Preferably when the temperatures cool off a bit. 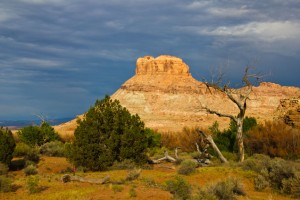