Winter was still clinging to most of northern Utah so David and I jumped into my Explorer and head for what we hoped, was warmer climes. Saturday morning we drove to Moab Utah and found that most of the snow had melted. The sun was shinning and warming the air almost to the point where jackets were not necessary.

We followed the “Potash Road” west out of Moab to the mouth of Gold Bar Canyon where we began our hike. From a parking spot near the Colorado River, we crossed the “Potash Road” and then climbed up and over the hill of the railroad grade. We could then see that dropping to the bottom of Gold Bar Canyon would soon lead to a dry fall that look unclimbable so instead, we climbed up the cliffs on the right side until we could reach a ledge to walk northward on, up the canyon.

Within a half a mile, we had reached Belt Buckle Arch, a nice class C natural arch. 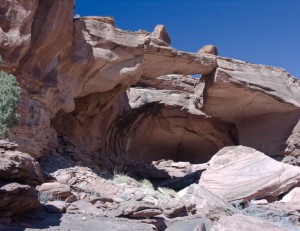 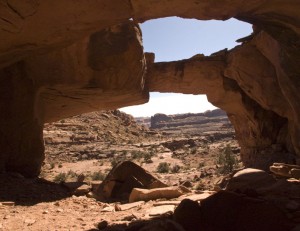 Nearby we also checked out another class D arch that we called Jagged Knife Arch. 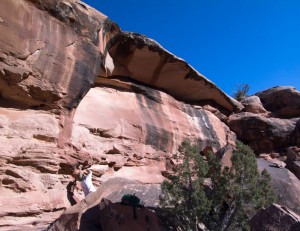 We were so out of shape for hiking, we then had to rest for a while before continuing up the canyon to a small class D natural bridge called Tunnel Bridge. 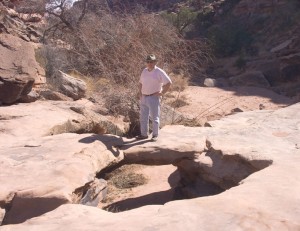 And that was about all the hiking we were capable of doing for the day. By the time we made our way back down the canyon and down the cliffs again, it was late in the afternoon and the shadows were growing long. This made for some nice evening pictures along the Colorado River before we headed home again. 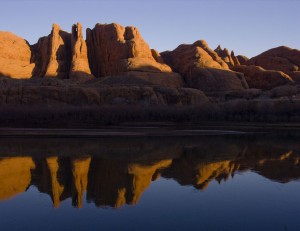 Since the days are so short, we were home early in the evening.