The Colorado Side of Dinosaur National Monument

On Friday the 13th of April, my wife and I traveled to Vernal Utah to stay overnight with my parents. The next day we drove into Colorado so we could explore the Colorado side of the Dinosaur National Monument.

Note: OK, this isn’t officially a Utah Trip Report but I’ve always believed this area should have been included in Utah since it is more like Utah than it is like Colorado. We just need to re-draw the state boundaries to include some Utah like areas (such as Arizona’s Coyote Butte area with The Wave, Colorado’s Rattlesnake Canyon and Idaho’s City of Rock) and exclude other non-Utah like areas (such as Wendover).

I grew up in the Uintah Basin and spent most of my early years exploring every rock in the area. However, I didn’t spend too much time on the Colorado side of the monument and I wanted to see it again. I especially wanted to visit the Steamboat Rock area on the Colorado River.

From Vernal we drove southeast to Jensen Utah which is one of my favorite stomping grounds and an area where I spent a lot of time when I worked for Uintah County. From Jensen, tourists usually drive north on the monument road to visit the dinosaur quarry that gives the park its name. However, we continued east across the Green River until we hit the Colorado state border and the small town of Dinosaur Colorado. At the nearby monument headquarters and visitor’s center, we turned north on the Harpers Corner Road and drove the paved road up the mountain to the very end of the road. We then backtracked to the Echo Park gravel road which took us down the mountain into Pool Canyon and ends at Steamboat Rock in Echo Park (also called Pat’s Hole). Steamboat Rock is just a short distance downstream from the confluence of the Green and Yampa Rivers.

Along the road we stopped at the old Chew Ranch to take some pictures and wander around the old homestead. Since it was spring, wildflowers were blooming which helped make the homestead a very enjoyable place to visit. 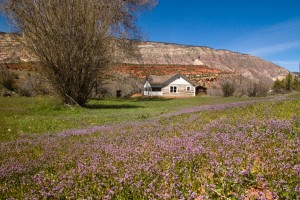 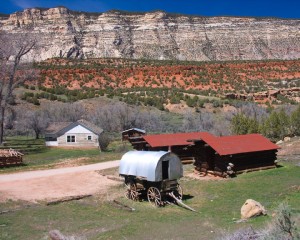 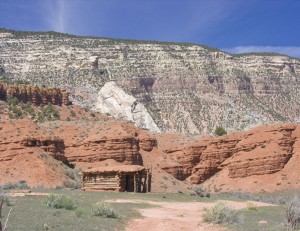 Further down the road we also stopped at Whispering Cave which is a strange aberration in the cliff wall. In the alcove, there is a nice breeze pulling upward into the abyss but no light can be seen which would seem to indicate another opening is somewhere far above in the cliffs. 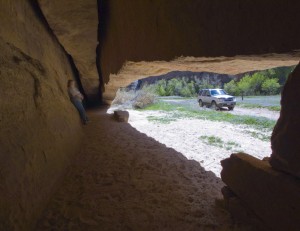 Just around the corner, there were some faint Indian petroglyphs. 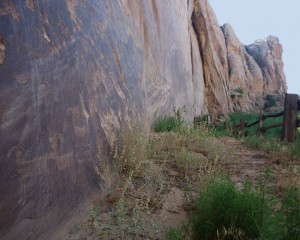 Steamboat Rock is a large sandstone monolith that protrudes out into the Green River at a bend in the river. On one side, there is a round structure in the sandstone which suggests a steamboat paddle wheel. Nancy and I sat on the sandy beach to just enjoy the warmth, the flowing river and the ambience. Really nice. 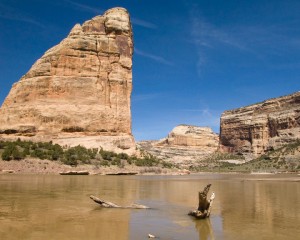 Soon it was time to begin the drive back to Vernal and Sunday we drove back to Utah valley again. All in all, it made for a nice weekend away from our usual lives.