On Saturday April 7th, David and I were again headed south to explore some corner of Utah. This time we headed to Capital Reef National Park where we parked next to the park highway and hiked south up into Cohab Canyon.

It was kind of exciting to be out hiking in warm weather again but after being mostly inactive all winter, hiking was also a little slow as we climbed the trail. We had to hike a short distance and then stop to wheeze while trying to catch our breath again. Initially it felt great but not so much by the end of the day.

About the time we hit the first summit, David noticed a nice natural arch a short distance off the trail that we were unaware of (now called Cohab Canyon Arch). I wondered if the trail followed a different course that the last time I hiked it. I remember the trail working up a small wash that had a small arch on the edge called Frying Pan Arch. 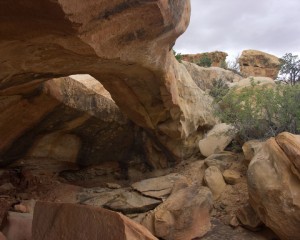 After taking pictures of this new arch, instead of continuing on the trail, we hiked west up the sandstone ramps until we were above the deep sandstone fins overlooking Cohab Canyon to the north and the settlement of Fruita to the northwest. I even managed to find a way to the very edge where I could take pictures of the fields below. 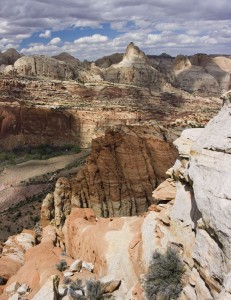 However, the fins did not yield any additional natural arches like I had hoped.

We then cut through the cliffs to the south so we could reconnect to the trail while walking above a deep canyon that was our goal in the first place. However by now we were tired and had burned the best part of the day just exploring the cliffs. The canyon that we were heading for didn’t look that interesting from the rim so we decided to forgo actually entering it. Instead we headed back down the trail to the vehicle and just spent the rest of the day bumping around the main park roads. 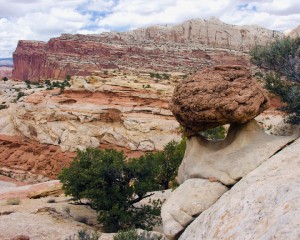 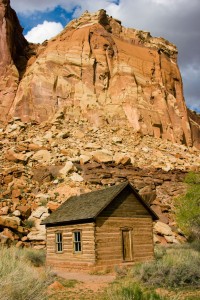 Boy, it felt good to get out again!