On Friday August 29th, for the Labor Day weekend, I loaded my family into our van and headed for the family cabin located between Vernal Utah and Flaming Gorge National Recreation Area in northeast Utah. 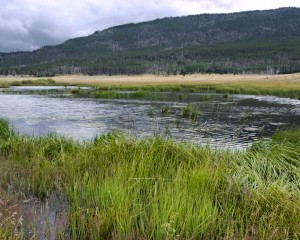 Saturday we drove over to the Ute Mountain lookout tower on the mountain south of Manila Utah. This is one of the few remaining forest fire lookout tower in the western United States. This tower has special significance to my family since my Grandparents, Ida & Buell Bennett, manned this tower during World War II for two years (probably 1943-44 or so). They lived in a trailer and tent near the base of the tower while my mother (about 11 years old) lived in the tower.

Whenever a fire was spotted (usually lightning caused) my Grandfather and a couple of other forest service men, would walk out to the fire and be gone for several days while they fought the fire with hand tools. This left my Grandmother and my mother to man the lookout tower.

The tower was built by hand (no cranes) by a CCC troop stationed nearby. My Great-Grandfather, John Bennett, directed the building. 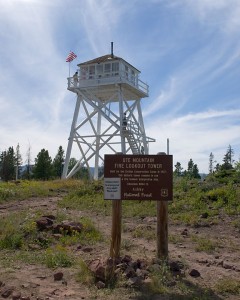 Since my Mother and Father was in our group of their children and grand-children, my Mother decided she wanted to climb the rickity wooden stairs to the top. Inasmuch as she is deathly afraid of heights, I thought that this was going to be a problem but she forced herself to go up and did just fine even coming down later. She was able to speak with the seasonal manager that is assigned to meet tourists, and swap information. Apparently, there are huge gaps in the history that the Forest Service has on the Ute Mountain Lookout Tower. 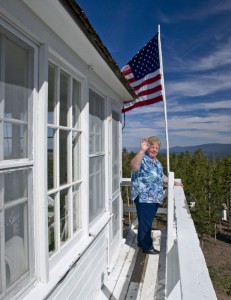 After leaving the lookout tower, most of us also drove out the Dowd Mountain road to the overlook at the end of the road. After a few pictures and spending some time watching the boats on Flaming Gorge through binoculars, we headed back to the cabin.