After a long week of state wide rain storms, the weather cleared up for the weekend. That seemed to be an invitation that we couldn’t ignore. We just needed a destination that would be dry enough to explore without slopping through mud. That eliminated most canyons and most ATV rides.

So Saturday morning, brother David and I headed for Arches National Park near Moab Utah in my Ford Explorer (and no ATVs). Once inside the park, we stopped at the visitor’s center so we could scope out the surrounding hills to see if we could find a small class ‘D’ arch called Rainbow Arch. We had looked for it before and now it was becoming an obsession to find the pesky thing. We did finally locate it directly west of the visitor’s center, hidden in the jumble of rocks. 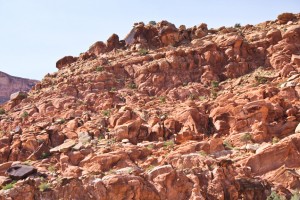 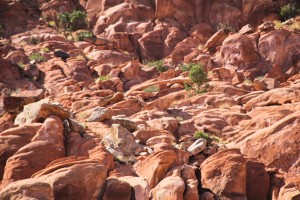 Several miles down the Willow Springs Road, we parked at Willow Springs and began hiking the sandy wash heading north up Fourth Wash in the Herdina Park area. Just to the east was Third Wash, Second Wash and even First Wash which begins near Eye of the Whale Arch. These are all fairly short (and dry) washes that drain out of some fairly deep but short sandstone canyons. We wanted to see if any of these short canyons hid any natural arches or bridges. 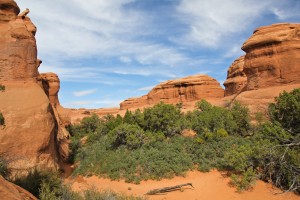 Less than a mile into our hike, we had visited several small class ‘D’ arches hanging on the east cliff wall called Figure Arch and Reflex Arch. 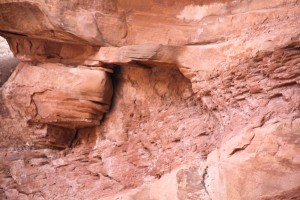 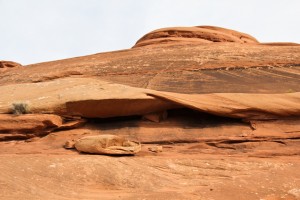 We soon encountered dry falls that stopped us from entering the more interesting part of the upper canyon. 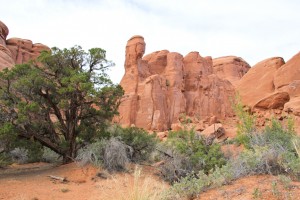 We backed down the wash until we could find a side canyon that let us climb out so we could walk along the west canyon rim.

On the way out of the wash, I found the remains of a man-made bundle made out of cedar limbs and cedar bark rope. Since cedar deteriates very slowly even in Utah weather, it could have been part of something made by ancient Indians or it could be something made more recently. Either way, I found it interesting for a picture. 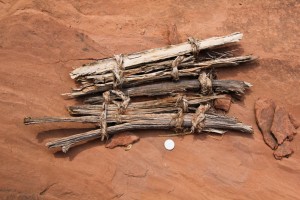 Once on top, we could see the area we wanted to get in to but struggled to desend the cliffs to get there. 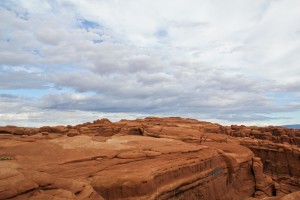 We finally found a way down on the far west side which then required that we hike north around the cliffs until we could enter a pocket in the east sandstone cliffs.

We then had to hunt around for an access to the top of Fourth Wash. We finally found a side wash partially hidden by a huge cedar tree that had grown so large that it had splayed into five separate trunks. It was interesting to see that all of the separate trunks were still living and even thriving. 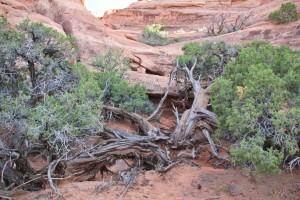 After climbing up the side wash on the south side of this pocket, we were able to find our way into the upper part of Fourth Wash where we found Flying Buttress Arch, a class ‘C’ arch. 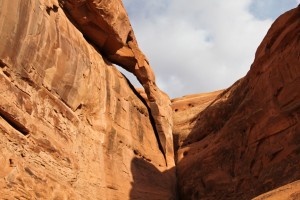 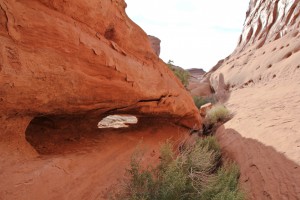 Finally we were at the top of Fourth Wash. 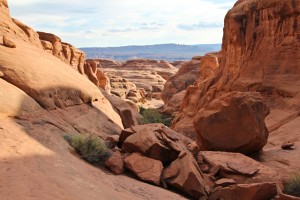 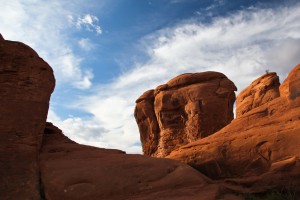 On our way back to the pocket, we continued to the northeast to visit some deep alcoves that we could see in the low cliffs. This turned out to be a long cliff of alcoves, one of which was a rather deep cave. 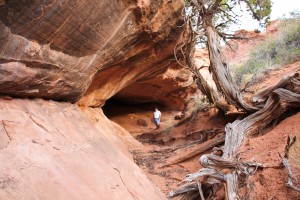 I carefully entered the cave which required crouching and waiting for my eyes to become accustomed to the low light so I could check for snakes. (We haven’t seen a rattlesnake for over five years now but one of the last ones that I met was in Arches National Park.) Because the cave was well protected from the weather, I could see tennis shoe tracks from previous visitors that could have been a few months old or over twenty years old.

One of the deep alcoves was so deep that it actually broke through to a short canyon to the north. This made it an arch which we found out later was called Hidden Canyon Arch. 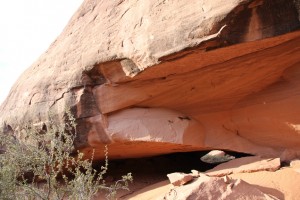 I climbed through the hole to take a look but cliffs stopped me from seeing much on the other side. 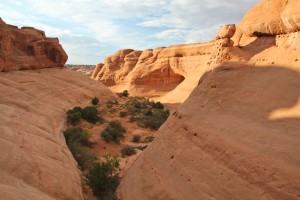 The day was getting late and we needed to head back. 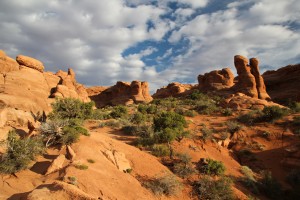 We headed back by skirting along the west side the cliffs which then became the west rim of Fourth Wash and dropped us directly back at the vehicle. I then walked over to Willow Springs to take a few pictures of the remains of a shed or shelter that was located there. 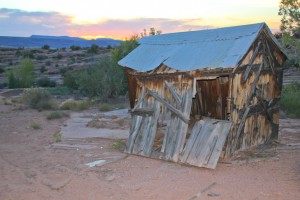 Total hiking and climbing mileage for the day: 5.2 miles. (A distance confirmed by my legs the next morning.)

We then headed out of the park by continuing our drive westward until we hit the Moab Canyon highway. Along the way, we stopped briefly to examine the dinosaur tracks and signage located next to the rough road. 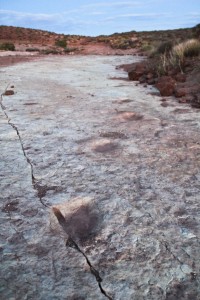 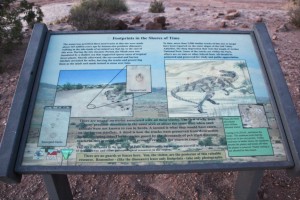