After almost a month since the last time I spent some time exploring Utah on the back of an ATV, I decided to pickup David on Saturday morning and head to the Moab Utah area with the ATVs. (OK, so it was actually David’s idea.)

For the fourth time this year, we parked in the $5.00 parking area a few mile northwest of Moab and rode the ATVs up the Little Canyon dugway to the top of the mesa. After driving down Little Canyon, instead of continuing on up the Gemini Bridges road, we took a side trail heading east towards the Gold Bar area. Along the way we stopped to take pictures of the small class “D” natural arches including Jingle Bell Arch. 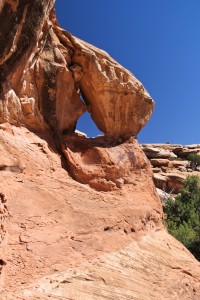 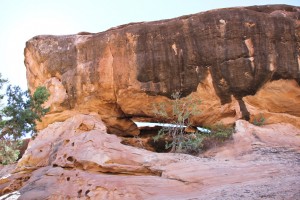 Years ago, we had driven this trail several times in one of my Ford Explorers but the trail was now almost un-driveable for any stock vehicle. We struggled over a number of road obstacles and decided that it was a challenging trail even on ATVs. Luckily, we were not going to go beyond the point near Gold Bar Arch where they had named the trail “The Rusty Nail” trail. This trail continues over a number of severe rock shelves that only modified “rock crawlers” could navigate.

As soon as the trail crossed Gold Bar Wash, we stopped and found another class ‘D’ arch called Gangplank Arch located just a stones throw north of the trail, hanging on the east side of the wash. 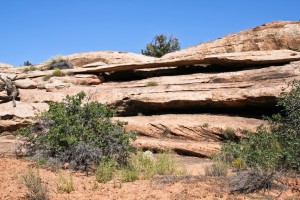 While we were here, about five motocross motorcycles passed us, also heading east. Rather, all but one passed us. The last rider had problems that caused his engine to quit. This apparently required a waiting period so his motorcycle buddies soon rejoined him. As David and I set off down the wash to look for another natural arch, they were all reclining in the shade of a nearby rock overhang, swapping trail warrior tales.

The arch we were looking for turned out to be located only about a hundred yards down the wash to the south. We found it by walking along the west rim of Gold Bar Wash (Gold Bar Canyon) while we looked for a way to drop into the drainage. As it turned out, the best way to drop into the drainage below us was through the arch opening. The arch was a really nice (and large) class “C” arch that we called Patriot Arch. 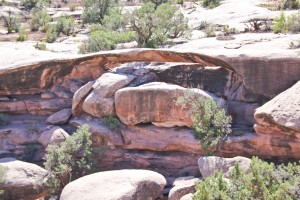 Back at the ATVs, our motocross friends had disappeared and we continued eastward to the first major rock shelves of the Rusty Nail trail. We weren’t going to take the ATVs any further on THAT trail.

Instead we hiked east on the trail until we could easily swing to the south and climb up the east slope to Gold Bar Arch (sometimes called Jeep Arch).

Along the way we found another class ‘D’ arch called Search Arch. In fact, we ended up climbing up through this arch to gain the top. 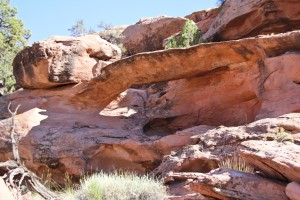 At the top I found a large boulder that the ancient Indians had used to sharpen arrowheads. Deep groves were worn into the sandstone and the boulder overlooked a large area where it would be possible to watch for game. 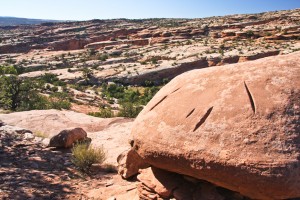 Around the corner of the cliffs was Gold Bar Arch, a large and picturesque class ‘B’ arch located in a large sandstone free-standing fin. I’m not sure how many years it had been since the last time I had been there but I know I was shooting film then. That means it was a LONG time ago. It was nice to be back. 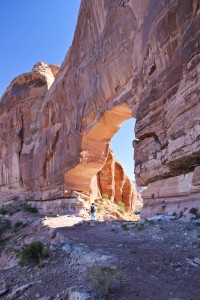 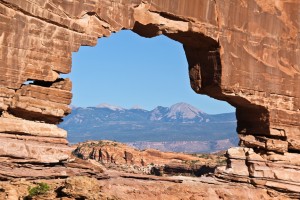 We were sitting on a hill west of the arch when we noticed two hikers approaching from the south. They had obviously hiked up from the Potash Road. I hung around to talk to them and found that they were a German gentleman and his son, Guenther and Florian T. Communications was rather difficult but I was able to gather that he regularly comes to Utah to visit the natural arches here. He mentioned that they had visited Funnel Arch the day before and gestured to the south.

My, this area of the country is getting crowded. I’m not used to meeting so many people on these outings!

On the way back to the ATVs, we dropped down into the Gold Bar Canyon drainage on the north side of the Rusty Nail trail to visit several more class ‘D’ arches including Stick Pin Arch. 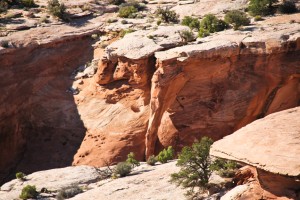 Then it was time to bounce our way back to the Little Canyon road and back down the dugway to our vehicle.