The hot summer temperatures were beginning to lessen though still above normal for this time of year. David and I took Friday off from our jobs so that we could spend a long weekend in southern Utah.

We left Thursday evening as soon as we could get off work, and drove to Monticello Utah in my Ford Explorer Sport. (We did not take the ATVs this time.) When passing through Moab, we noticed that there were a lot of tourists on the streets which made us worry about the availability of motel rooms in the area. However, this was Thursday night and we figured there HAD to be rooms available during the week. In Monticello, our fears were confirmed when we found all motels full. We continued on to Blanding Utah and found the same thing there. In fact, one motel operator let us know that they had already been notified that there were no rooms from Mexican Hat Utah to Green River Utah and even into Colorado. We were simply out of luck.

Not a good start for our long weekend.

Though we hadn’t packed for camping, we ended up spending the night on a remote side road between Monticello and Blanding. Luckily we did bring our own pillow and had emergency Mylar “blankets”.

It was a LONG night.

I can’t sleep sitting up even in reclining car seats. I tried sleeping on the hard ground next to the vehicle but I ended up mostly just watching the brilliant stars blasted across the perfectly clear sky and counting the shooting starts. (That part was nice.) I probably got a total of about 3 hours of naps.

The next morning we drove into Monticello for a hot omelet breakfast. We then began hitting all the motels to see if we could at least get a room for Friday night. We managed to get nearly the last room in the second motel we checked. (Yes! Thank you National 9 Motel!)

We then grabbed some snacks, filled the gas tank and headed for the Needles area of south Canyonlands National Park. 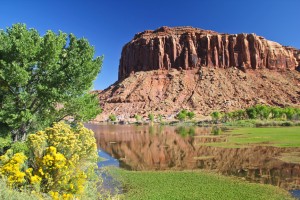 We planned on purchasing a day vehicle pass to allow us to go back into Horse Canyon and finish hiking to several natural arches that we had missed the last time we were there in May. We had our fingers crossed that they hadn’t already given out the 10 passes allowed per day. This would have been the only thing that could mess up our plans at this point.

At the Visitors Center, we found that there were NO passes being give out at all. In fact, both Horse Canyon and Salt Creek were completely closed. Major monsoon thunderstorms on August 17th had caused flooding in the canyons and all roads had been destroyed…. again. They were waiting for the area to dry out again so that they could repair the trails to the point of being passable again.

Time for a change of plans.

While we couldn’t drive into Horse Canyon, we could drive to the locked gate and hike east into Salt Creek Pocket to visit several natural arches in that area. This allowed us to see some of the trail damage in the area, which was significant. At least one trail side swamp had been created and as we passed it, the mosquitoes (probably Culex tarsalis) swarmed over us almost chasing us down the wash. We were away from the wash and into the pocket before we were rid of them.

The original plan was to hike just over 2 miles to several known natural arches and then return. However, on the way we kept finding other things that grabbed our attention, including several new arches including one small class ‘D’ arch we called Snout Arch. 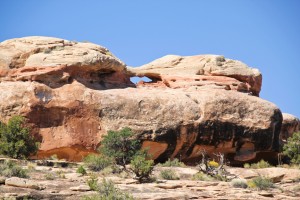 This added miles to our trip though the way was mostly level through sandy flats and tumbleweed fields. 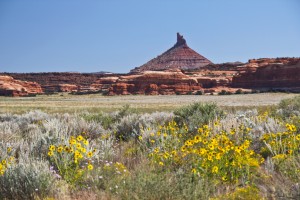 The late summer blooming Sticky Asters were abundant as well as a few quick blooming wildflowers that were taking advantage of the summer rains. 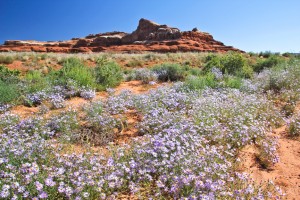 When we finally reached the furthest natural arch, called Salt Creek Pocket Arch, we found a beautiful class ‘B’ arch after passing a smaller class ‘D’ arch on the way. That alone made the hike worth while. 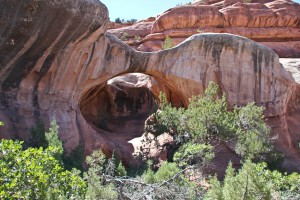 In the nearby cliffs we also noticed another small class ‘D’ arch I called Another Arch. (We must be running out of nouns.) 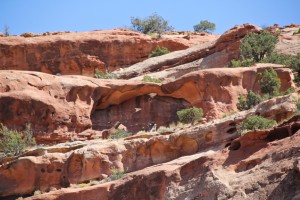 It was now over 90 degrees and the lack of sleep was beginning to wear on us. We found a nearby shaded and sandy alcove for a long nap and a snack.

While hiking through this area of Canyonlands National Park, I found it interesting that there were no signs that cows had ever been ranged here. In areas near protective cliffs where cows would naturally gather, there were no old cow dropping, which never really disappear even over long periods of time. Neither were there any fences, corrals or man-made water catchments. I also did not see any Indian petroglyphs in spots were I expected some.

We then made a side trip to the next pocket to the south after climbing over a low pass in the cliffs. 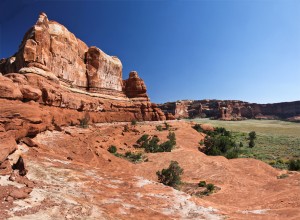 We had noticed several deep alcoves in the high cliffs to the south and needed to get a closer look. Once of the alcoves did turn out to be large class ‘C’ arch that we called Faucet Arch. 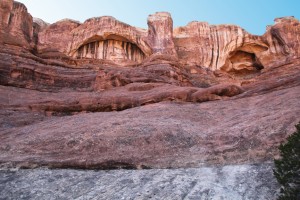 Near the cliffs, it was now shady and cool so we took another nap.

This area was well hidden by cliffs and large cedar trees. Near the cliffs we found an old cowboy camp defined by a large number of rusty cans that had almost rusted away completely. In a flat area, we found what was either a bed platform made from cut cedar branches, or perhaps a low table. This would probably have been enclosed by a canvas tent since it was the only flat spot in the area. Next to the cedar limb platform I found the lid of a dutch oven cooking pot. (Now what cowboy would loose the lid of his dutch oven?) I also found several spent 32-40 (W.R.A. Co.) gun cartridges with a unique tapered design that I had never seen before. Nearby I also found a horseshoe and the base plate of a pocket watch. (The plate that all the gears and springs are mounted on.) The base plate had a bullet shot indentation in it. 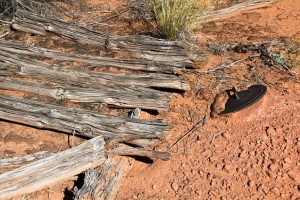 With no cattle ranging nearby, it would be interesting to know the story behind that camp… if there is one.

From there it was a long, hot hike through the tumbleweeds and sagebrush back to Salt Wash. Then we had to hurry to the vehicle again to outrun the vicious mosquitoes.

At that time, my vehicle was reporting that the outside temperature was 104 degrees. Luckily, it hadn’t been that hot for the earlier part of the day. 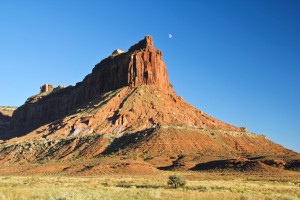 We then drove back to Monticello for a much needed night of sleep in real beds. 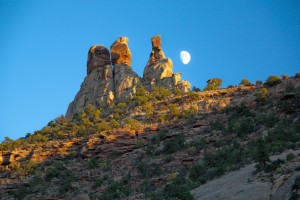 The next morning we had a cold breakfast and headed back to the south end of Canyonlands National Park. 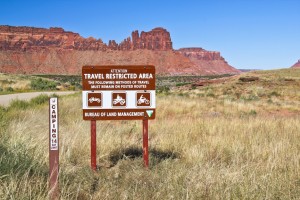 This time, instead of driving into the Needles area, we pulled off the main park road and took the jeep trail to the south up Davis Canyon.

The flooding from the August 17th storm had rearranged the trail and the dry wash that makes up the trail but at least it was dry all the way to the Canyonlands National Park boundary. As we approached the canyon and the cottonwood tree area, the trail was missing in a number of places but previous vehicles had already defined new trails around the problem areas. At the park boundary, we found the “Flood Fence” completely ripped out by the flooding in spite of the fact that steel cables had been anchored into the cliff sides and heavy metal posts set in concrete. 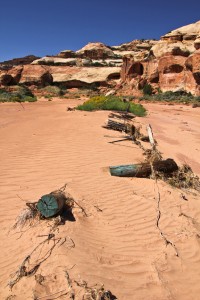 The foot hiking starts at this point, which limits the amount of Davis Canyon you can visit without camping overnight. 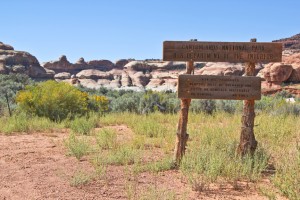 We made it to the intersection of canyons where Junction Arch (a large class ‘C’ arch) can be found high in the north cliffs. 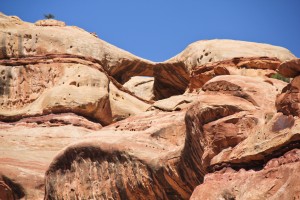 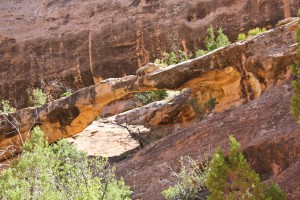 At another nearby canyon intersection, we could see four Indian granaries in a high alcove and some handprint pictographs surrounding one of the structures. 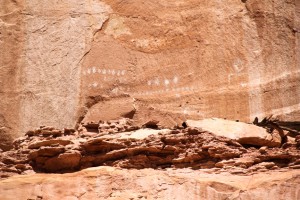 It was much too hot and we were too tired to do much exploring. Soon we were forced to head back with much of the canyon still unexplored.

Once out of the park, we did stop one more time for a quick distant picture of Granary Arch which is just inside the park boundary, in a side canyon. We would had to have climbed up the north side of the cliffs to get decent pictures of the arch and the Indian granary located underneath. That was out of the question by then. 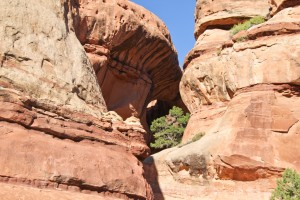 We then headed for home back in Utah County.

In spite of our busted hiking plans, we still managed to enjoy a couple of days exploring new areas of Canyonlands National Park.

It was a good trip.