It was the Memorial Day weekend and time for the family tradition of a pilgrimage to the family cabin located on the mountain near Flaming Gorge Reservoir. There we attempt to stuff the entire extended family (at least those feeling up to the yearly challenge) into our four bedroom, two bath mountain cabin. This year there were 17 brave souls with about another 20 abstaining. We left Friday night after work and joined the others to watch it snow all day Saturday.

Sunday we all headed for church in Dutch John where the annual Memorial Day tourists triples their ward size in a rather small chapel. It wasn’t as bad this year since the weather obviously kept a lot of people away. We still filled the chapel even with extra chairs down the side walls.

The weather was starting to break so we took a chance on the fact that the storms were only hitting the mountain and took an afternoon drive into Wyoming. My wife and daughter were with me in my Ford Explorer while my son and his wife, along with David, were in my son’s SUV. (If it isn’t a Ford, I don’t feel the need to mention the brand.) We drove to Coal Basin Camp Utah which was on the way to Brown’s Park on the Green River. Just after Coal Basin Camp, we turned off on a side road heading east and then north back into Wyoming. At this point, there was a sign indicated the correct road. Soon we then took another road to the east (we found a sign laying next to the road) which took us to the Utah – Wyoming – Colorado border marker. This was yet another “corner” of Utah that I wanted to visit.

The last mile required traversing a number of deep mud holes. The bottom was rocky so other than being very muddy, there was no real danger of getting four-wheel drive vehicles stuck. However, I noticed that my son was having WAY too much fun slinging mud as he went through them. (Silly rookies.)

The tri-state corner had a wonderful view into Wyoming… as if there was anything to see there. The corner marker was situated in the sagebrush hills with pockets of pine and aspen nearby. Along the way, we saw several groups of Mule deer does and even an antelope. 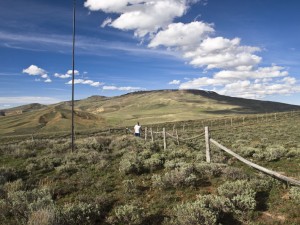 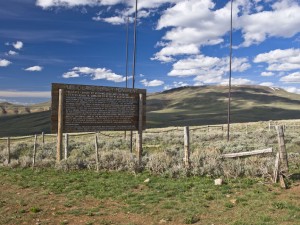 Once we had taken a few pictures of ourselves at the corner marker, there wasn’t anything to do except head back again. We returned to the cabin to await the next snow storm. As it turned out, Sunday evening and Monday were nice enough to actually enjoy. Monday afternoon we headed home again with thoughts of returning to our jobs the next morning.

Below are some 35mm slide pictures taken September 1966 by my Grandmother Ida Bennett, at the dedication of the Tri-State site.