All week long, we had been enjoying the afternoon thunderstorms that northern Utah sees nearly every year that we call the Utah monsoon season. This year they seem to be about a month early but since we had Spring about a month late, it all seemed right, I suppose. (I spent the 4th of July evening watching fireworks from underneath an umbrella.) By the weekend, things were drying out in Utah so my brother David and I loaded up the ATVs and headed to Panguitch Utah on Saturday morning.

Southeast of Panguitch, near the Red Canyon Forest Service area, we unloaded the ATVs and headed north on the dirt road. Our first stop was near the mouth of Losee Canyon where we spent a hour or so walking the Arch Loop trail. 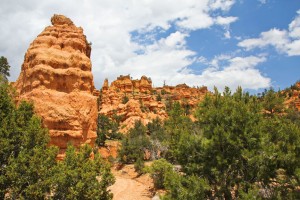 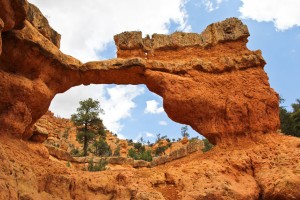 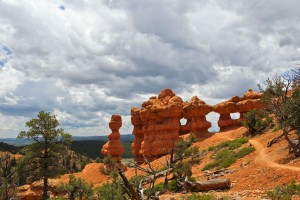 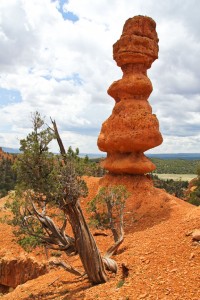 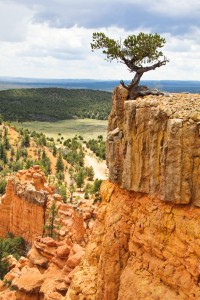 Back on the ATVs, we continued north a few miles to Casto Canyon where an ATV trail extends all the way up the canyon. Casto Canyon is a wonderful canyon of Bryce Canyon type formations (and occasional natural arches) among juniper and Ponderosa pines. The air was so clear and fresh that breathing deep was almost intoxicating. It all made for a wonderful, scenic ride. 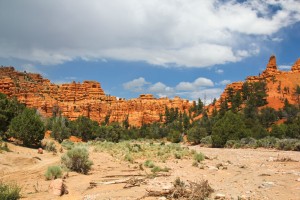 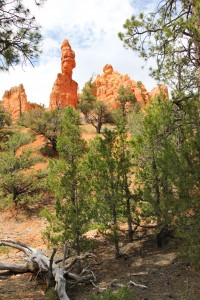 Along the way, we met two bicyclists and two other ATV riders heading down the canyon. Other than that, we seemed to be alone in the canyon.

Near the top, we saw a mule deer doe with three of this year’s fawns. That is rather unusual. That also indicates a lack of mountain lions in the area.

When the Casto Canyon trail joined the dirt roads at the top of the mountain near Barney Cove, we started seeing thunderstorms heading towards us. This required us to dodge the rain for the rest of the afternoon but be managed to keep clear… until late in the day.

From Barney Cove, I noticed several strange natural arches (probably only class ‘D’ arches) at the top of high cliffs to the east. We would need to return and check out that area.

We took dirt roads south and then east around Casto Bluff to another area called Showalter Bench. 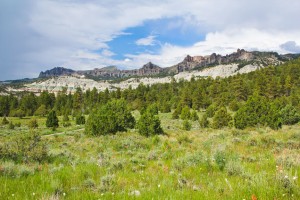 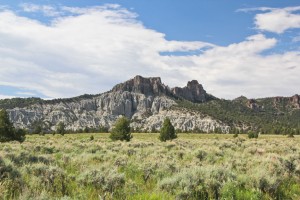 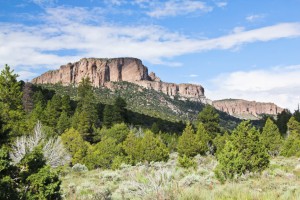 There we hiked across a sagebrush flat to visit Buzz Arch (large class ‘C’ arch) located at the east end of a long rocky ridge. 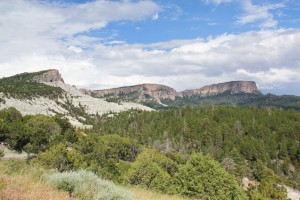 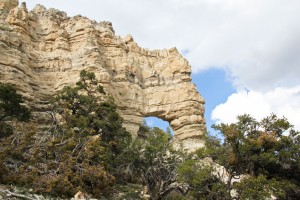 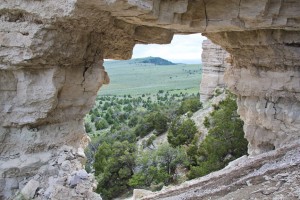 By the time we returned to the ATVs, it was necessary to make some alternative plans to keep from getting soaked. Returning down Casto Canyon no longer looked like a good idea because of heavy rain moving into that area. Instead we continued east until we hit the Great Western Trail roads. We then headed south on the dirt roads all the way to the main highway between Tropic and Panguitch. We parked the ATVs at the ATV unloading area. The plan was for me to leave everything there while I hitchhiked back down the mountain to our vehicle while David hid from the rain under the eaves of the outhouse.

As we pulled in, a couple in a car with California license plates was just pulling out. I stopped them and asked which direction they were heading. They were heading the direction I needed so I begged a ride to the bottom of the mountain which they graciously gave. (That was easier than I expected.)

My new friends were retired and lived in Victorville California. They had some property near Panguitch so they came out here during the summer months for sightseeing and to visit friends. They were a delightful couple and gave me a ride right to my vehicle just as the rain started.

A few minutes later I was back at the ATVs where it was starting to rain just lightly. We quickly loaded up the ATVs and headed down the mountain.