Back to Rip Canyon

In the midst of my dear wife’s peaches/pears/tomatoes canning frenzy, I was able to slip away for a whole Saturday, to spend some time hiking in the canyons of the San Rafael Swell.)

(This year’s peaches off my little peach tree. About three bushels of the most delectable, soft-ball sized fruit you have ever tasted.) 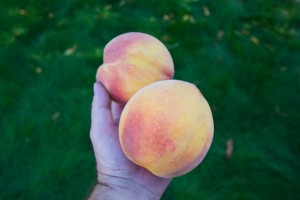 David and I headed back to Rip Canyon on the southeastern rim of the San Rafael Swell. We had last been in that area just over a month earlier. The temperatures were now about 10 degrees cooler though still a little warm for long hikes.

Once we parked my Explorer on the dirt road near Rip Canyon Wash, we headed up the long slope keeping the wash on our right (north) this time. 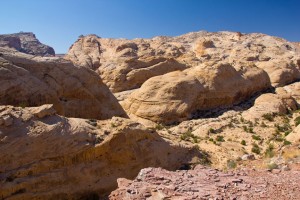 As the wash cut into the swell and became a sandstone canyon, we were able to explore a different area and find access to one of the cross canyons that “rip” laterally across the canyons and washes. 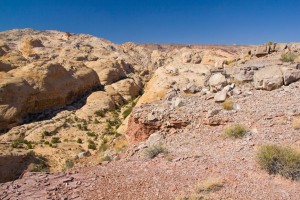 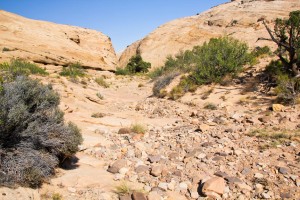 We were tempted to continue in the cross canyon further to the north but that would have taken us deeper into new country that needed more time to explore. 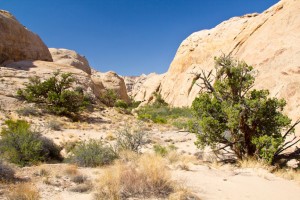 In the short section of Rip Canyon that we could access, we visited two class ‘D’ natural bridges and found a new class ‘D’ arch. The first small bridge was called Tinky Bridge. 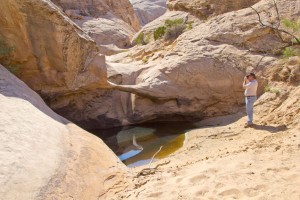 The area around the water pool was teaming with desert Red-Spotted Toads. 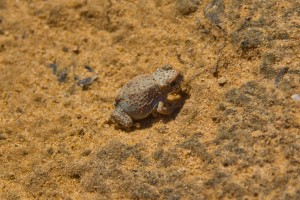 The next bridge was only about 50 feet further west and is called Winky Bridge. (No, we did not name these!) 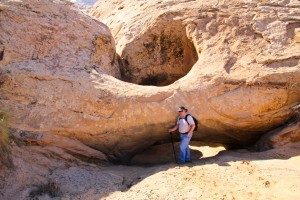 On the hillside just a few yards south of Tinky Bridge we also found a long slab arch we called Extended Slab Arch. (Ya, that’s the way to name an arch!) 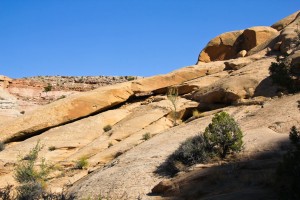 In the area of the natural bridges, we were surprised to find fresh foot prints that had come up canyon from the slot canyon area. They stopped at the first bridge and did not continue another fifty feet to the second natural bridge. We also noticed that the foot prints returned the same way they came. Apparently someone was able to navigate the narrow canyon spot by “stemming” across the rough and wet areas.

We left Rip Canyon via the same cross canyon we had used to get in. Once we had again reached a high point, we were able to exit the canyon and continue westward. We then climbed a sandstone hill which brought us to the edge of the next cross canyon with canyon walls much too steep to descend. On the other side of the cross canyon was a short peak with a wonderful class ‘C’ natural double arch perched on top. 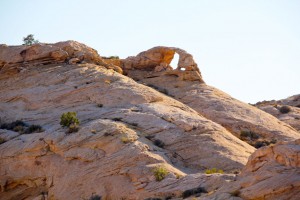 What a wonderful find! Locating a new natural arch made the whole hike worth while. Because of the remote area, it is likely that only a few living people have ever seen this arch. We called it Golden Eye Arch.

There was still a lot of country further west that we wanted to see but that required finding yet another approach. That means another trip into this country on another day. 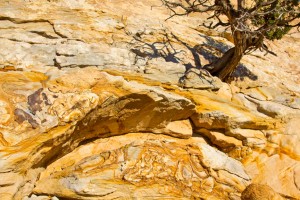 It was a long hike back to the vehicle but luckily, it was mostly down hill.

What awesome country this is!