It was five days until Christmas so I knew I had plenty of time to begin my Christmas shopping and still go hiking. The weather promised to be clear though cold. I decided to drive down to the San Rafael Swell to check an item off of my bucket list.

I had hiked to Wildhorse Window at least twice before but I had always overlooked the pictographs that I later learned were there. This had been something that had bugged me for several years so I decided this would be the perfect way to spend the shortest day of the year and the first day of Winter. (Or was that the next day?) 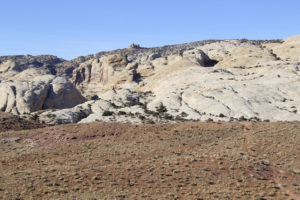 [The twin alcoves can be partially seen from the parking area. Note the dark shadow upper right side. Parking is a dirt road just off the west side of the main road, approximately .4 mile southwest of the turnoff for Goblin Valley State Park from the Temple Mountain road.]

I arrived in the early afternoon and began the hike near the mouth of Wildhorse Canyon heading northwest and staying on the north side of the canyon. Here the white Navajo sandstone provides a rough but ‘hikeable’ slope upward to the twin alcoves that contained Wildhorse Window. The hike is just less than a mile one way but with the trail starting with a drop off the dirt hills, I would call it a mile. Needless to say, I was the only one in the area that day, unlike the multiple hikers you might encounter in warmer months.

As you enter the narrow drainage of the alcove area, there are several water pockets that need to be navigated. Since it was winter, one of the water potholes left an interesting pattern in the ice as the water level dropped. 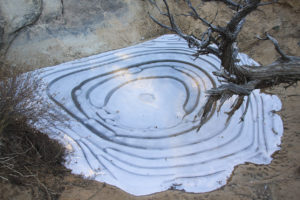 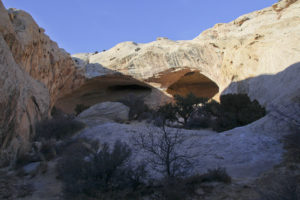 Once I was under the twin alcoves, I climbed up into the west alcove looking for the pictographs. They weren’t there. 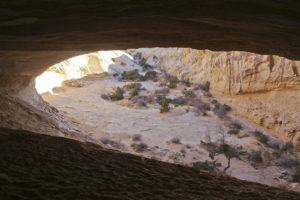 I did find the faded red of pictographs on the west cliff wall outside of the west alcove near the bottom of the steep incline into the alcove. 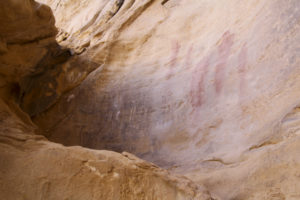 Instead, I found the pictographs on the east wall of the east alcove. 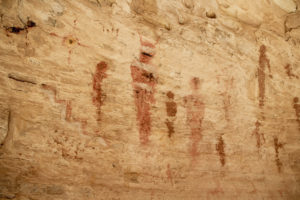 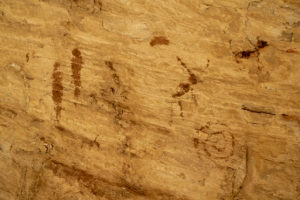 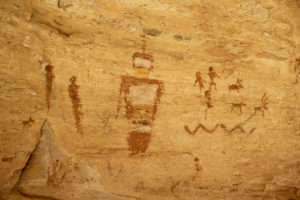 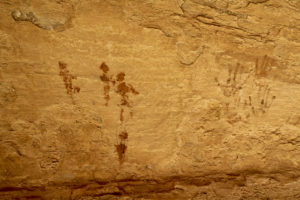 So my third visit to Wildhorse Window turned out to be a pleasant and quiet experience. 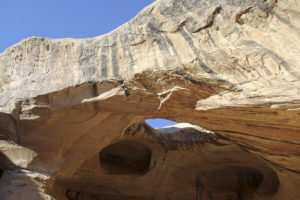 After hiking back to my vehicle, I still had some daylight left so I took a drive up Temple Wash and took a few pictures of Temple Mountain. 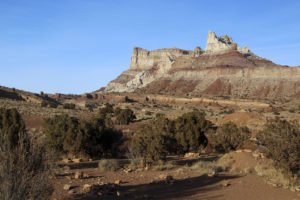 I also stopped to take a few pictures of the pictographs in Temple Wash. 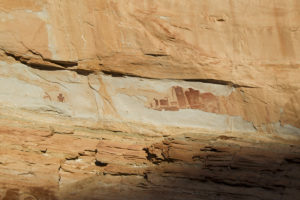 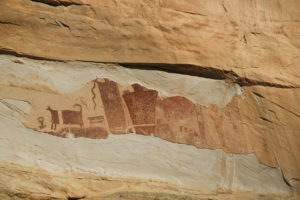 Then there was nothing to do but head for home.