I was waiting for a day that would be clear and calm in the San Rafael Swell so that I could take my DJI Mavic Pro drone down to The Wedge and fly it over Little Grand Canyon. I picked a perfect day! 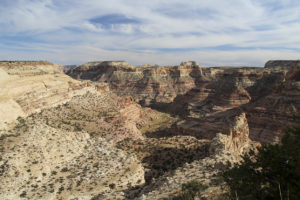 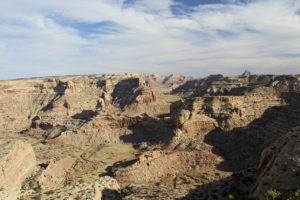 I arrived at The Wedge overlooking the San Rafael River just after noon. What little wind there was would not hinder my drone flying.

I first flew across the gorge and quite a distance up the side canyon opposite. I get nervous when my drone is flying more than a mile away so I tried not to extend that distance much. I managed to get some photographs and a 360 degree pano before flying back again.

I also flew up and down the “Little Grand Canyon” taking more photographs and panoramas including one flight near the mouth of Goodwater Canyon.

I then put the drone batteries on the charger in my truck and headed north and then east past the entrance for Buckhorn Draw. When I approached the head of Calf Canyon, I took off on a dirt road heading southwest. This dirt road followed along the north side of Calf Canyon until the road came to an end not far from where Calf Canyon joins Pine Canyon and Buckhorn Draw. 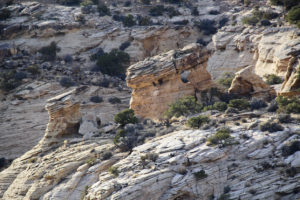 I took a jeep trail around to the north side of the rock outcrop which was as close as I could get. It was then a short walk down to the outcrop where I could get better pictures with the sun behind me.

And there sat a gentleman with his camera and tripod.

We introduced ourselves and I found out that he lived in Highland Utah and I let him know that I lived in nearby Orem Utah. Hmm. Small world.

I took a few pictures and left him to his solitude. (I think he was waiting for the sun to sink a little lower so the rock outcrop would be bathed in a nice orange glow of sunset.) 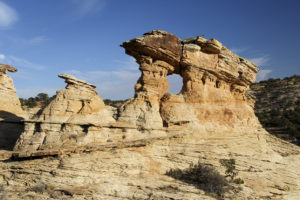 Back at the truck, I flew my drone one more time over Pine Canyon and down to Buckhorn Draw before calling it back again.

I REALLY enjoy flying this drone over the canyons and slickrock country of Utah. Especially when using my DJI googles which makes it feel like I am literally on the drone. I get to see places that I would never get to see — especially now that I have just had my 65th birthday.